U.S. housing is healthier than just about anyone believes…

That was the message from my colleague Steve Sjuggerud two weeks ago in DailyWealth. And anyone who has invested in the housing sector this year has done incredibly well.

The homebuilders sector is off to a stellar start in 2019… up 27% in just a few months.

But if you think you’ve missed it, you’re dead wrong. History says the big rally isn’t over yet…

A rare move just took place in this section of the market. It’s something that doesn’t happen often.

But when it does, big gains tend to follow. History says we could see 9% gains in just three months, starting now.

Homebuilders have already been a big winner this year. But that doesn’t mean they can’t go higher.

In fact, the trend is accelerating. We know this because the sector recently rallied for seven consecutive days.

When an investment strings together several up days in a row, it’s often a sign that the trend is getting stronger. And that means one thing… more gains are on the way.

That’s the story in place for the homebuilders sector right now. It recently rallied for seven days straight, triggering this rare event. Take a look… 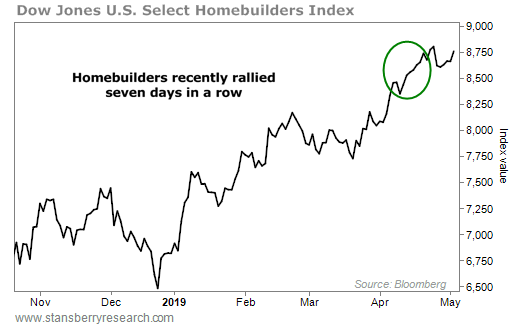 You can see the solid uptrend to start 2019. Homebuilders have been soaring. And the trend accelerated with the recent string of up days last month.

This is great for us as investors. It presents a lucrative opportunity. Since 1990, similar instances have led to impressive outperformance in the short term. Check it out…

A boring sector like homebuilders normally sees slow and steady growth. But buying after strings of up days like we just saw is a different story…

Similar events led to 4% gains in one month and 9% gains over three months. Those are huge returns for such a short period of time. But it’s what’s possible right now.

Importantly, there’s a simple way to put this idea to work now. It’s the iShares U.S. Home Construction Fund (ITB). This fund holds a basket of homebuilding stocks in the U.S. And it’s the simplest way to own the sector.

Homebuilders are breaking out right now. The sector recently rallied seven days in a row… And history says 9% gains are possible over the next three months alone.

ITB is the simplest way to take advantage of this opportunity. And given today’s bullish setup in the housing market, it’s worth checking out today.

This Stock Yields 9.5% and is Rated “A” for Dividend Safety

Upgrades and Downgrades for Friday, 5/29