Amgen (Nasdaq: AMGN) – develops and manufactures therapeutics for use to treat a number of different diseases. The company’s Enbrel is used to treat plague psoriasis, rheumatoid arthritis, and psoriatic arthritis. Yet another product, Neulasta, is used to treat cancer patients.

Most of the products offered by Amgen focus on treating patients in the following areas: oncology/hematology, cardiovascular, inflammation, bone health, and neuroscience. Amgen is headquartered in Thousand Oaks, California and was founded in 1980.

The earnings and sales growth for Amgen haven’t been as strong as a number of the stocks I have suggested in recent weeks, but its management efficiency measurements are among the best around.

Earnings have grown at a rate of 10% per year over the last three years and they were up 3% in the first quarter.

The company just reported earnings on April 30 and it beat its EPS estimate and its revenue estimate, but the stock slipped after the report.

One of the things that surprised me the most about Amgen was the sentiment toward the stock. There are 25 analysts following the stock and only 11 have it rated as a “buy” while the other 14 have it rated as a “hold”. The buy percentage only accounts for 44% of the total ratings and that is well below the average for a stock with strong fundamentals.

The short interest ratio is currently at 5.4 and that is yet another indication of bearish sentiment toward the stock. Remember, I view bearish sentiment as a good thing for the stock going forward as bearish analysts and investors can become bullish and that will help push the stock higher.

The weekly chart shows that a trend channel has formed on Amgen over the last three years. The stock is just below the lower rail of the channel at this time and I am looking for the upward trend to resume now that earnings are out of the way. 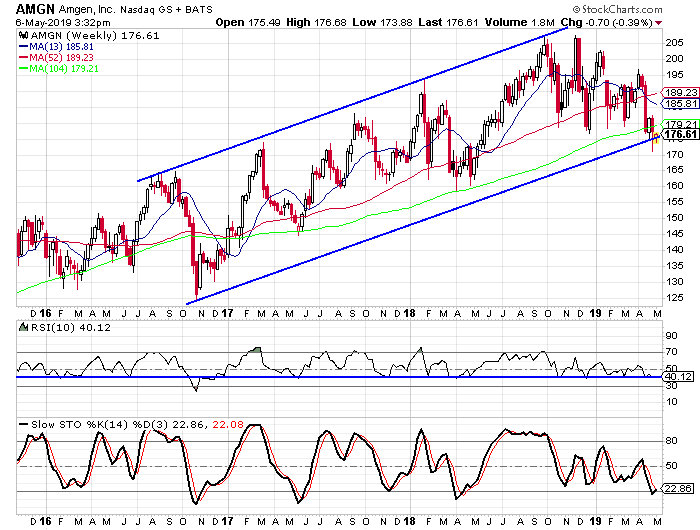 We also see on the chart that the stock moved below its 104-week moving average for the first time since late 2016 as the trend channel was starting to form. It is also worth noting that the overbought/oversold indicators are at levels that have marked lows in the stock over the last three years. The stochastics are right at oversold territory and look like a bullish crossover will happen either this week or next and the RSI is below the 40 level—an area that has marked lows in the stock several times.

Your Complete Guide to Municipal Bonds

Upgrades and Downgrades for Thursday, 8/6