Jazz Pharmaceutical (Nasdaq: JAZZ) – is a biopharmaceutical company that develops and sells pharmaceutical products internationally. The company’s products primarily treat patients in three areas: sleep disorders, hematology, and oncology. The company was founded in 2003 and is headquartered in Dublin, Ireland.

The first thing that stood out to me about Jazz was its fundamental performance. The company has seen earnings grow by 12% per year over the last three years and they grew by 23% in the fourth quarter of 2018.

Jazz is expected to report first quarter earnings on May 7, so be prepared for that.

Jazz’s sales have grown at a rate of 13% per year over the last three years and they grew by 9% in the most recent quarterly report.

Analysts expect sales to grow by 4.8% in the first quarter.

The management efficiency measurements are especially strong for Jazz.

The sentiment picture for Jazz is mixed with analysts rather bullish on the stock while short sellers are rather bearish.

There are 19 analysts following the stock currently and 15 have the stock rated as a “buy” while the other four rate the stock as a “hold”. The short interest ratio is currently at 4.87 and it has risen from 2.0 since mid-December. There were 2.34 million shares sold short as of April 15. 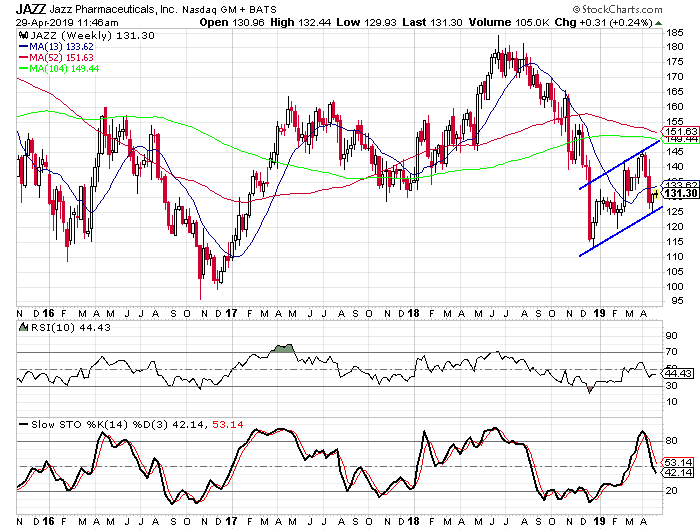 What we see over the last four months is that the stock has formed a short-term trend channel with the upper rail connecting the highs from February and April. The lower rail connects the lows from December, February, and last week.

The overbought/oversold indicators had slipped in to oversold territory back in December and it was the first time since late 2016 that both were that low. The rally off of that low took the weekly stochastic readings up to overbought territory, but not the RSI. The pullback in the last few weeks brought the stochastics back down and they are near the midway point at this time.