Stocks are hot. Bonds are not.

Last week, we asked readers what percentage of their portfolio is invested in bonds. The results ended up being surprisingly low. 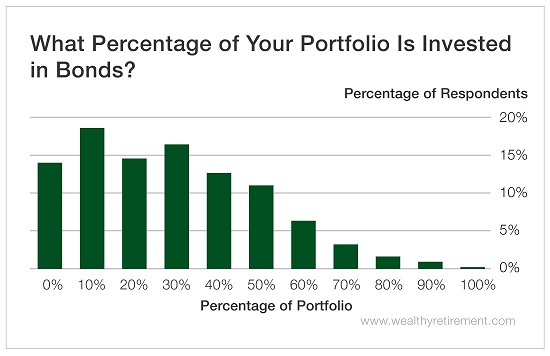 Under the traditional advice, a 60-year-old should have 60% of their portfolio invested in bonds and 40% invested in stocks.

An 80-year-old should have 80% of their portfolio invested in bonds and 20% invested in stocks.

With people living a lot longer, that advice can change. In many cases, more money is needed to fund those extra years.

The switch from growing wealth to preserving it has slowed down – and that’s not good for our lengthening retirements.

Many financial planners now recommend investing a percentage equal to 20 less than your age in bonds and the remainder in stocks.

Under either form of guidance, our survey responses show that many of our readers most likely have too little of their net portfolio in bonds. They also show that the majority of respondents, about 60%, have no plans to increase their bond allocation. 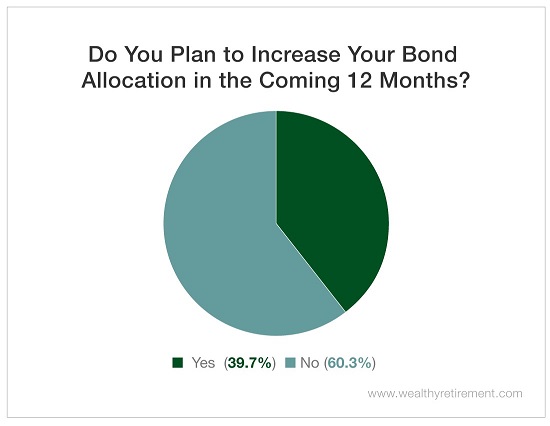 That move, or really lack thereof, could prove to be quite dangerous.

We’re in the midst of the longest bull market in – and while stocks could continue to go up for another year or more, the bull market is eventually going to run out of steam.

When that happens, investors without the proper stock-to-bond allocation are going to see their net worth tumble a whole lot more than it should.

That’s because bonds tend to hold up well when stocks perform poorly. The financial crisis is a great example.

Could your retirement fund withstand a 37% hit? If you’re like most Americans, your answer is “probably not.”

That’s why bonds and asset allocation are so important.

Bonds do a nice job of preserving wealth when the stock market heads south. The income they generate is also a nice bonus.

Bonds play an important role in portfolio diversification – but there’s no right or wrong number for your portfolio’s allocation. It’s important to find a balance that works for you.