As an investor, you must be willing to take your most cherished position out back and shoot it in the head.

That’s exactly what I told my readers in the November 2016 issue of Extreme Value.

At the time, I recommended subscribers sell their shares of beverage giant Constellation Brands (STZ). We’d held the stock since June 2011 and seen triple-digit returns… But anticipating Donald Trump’s presidential inauguration, I was starting to get nervous.

You see, Constellation Brands owned the exclusive rights to import, market, and sell six Mexican beer brands in the U.S., including the No. 1 imported light beer Corona Light.

Around 60% of the company’s sales were coming from its beer segment.

Trump won the election on promises of “America first.”

He was against the offshoring of U.S. manufacturing.

He had talked about rounding up illegal immigrants, mostly from Mexico, and shipping them back home.

And to top it off, he planned to get the U.S. out of the North American Free Trade Agreement (“NAFTA”) with Mexico and Canada.

Since I couldn’t predict what would happen to Constellation under Trump’s administration, I made the decision to exit the position. We locked in a massive 631% gain… Not too shabby.

Constellation is one of the greatest success stories in the history of Stansberry Research. As of today, it’s still among the top 10 all-time, highest-returning closed positions across all Stansberry portfolios.

But as I’ve come to realize, my recommendation to sell was partially based on emotion… And if I’d chosen differently, it’s possible my all-time highest return could have been even higher.

Now, I’m changing the way I do things.

Because, as I’ll show you today, some of the smartest investors I know have been able to take fear and greed out of the equation – simply by relying on math…

If you’re not familiar with trailing stops, you probably haven’t been with us for very long yet. Most of our analysts at Stansberry Research use them, including Steve.

A trailing stop is a trigger to sell an asset when its price drops a predetermined percentage below a certain value, usually the asset’s highest price after purchase. Let’s say you buy a stock and it goes from $10 to $20. Using a 25% trailing stop, if shares drop below $15, you’d automatically sell.

I used to say I’d never use trailing stops… As a value investor, they never made sense to me. I prefer to buy at steep discounts to intrinsic value and increase my margin of safety.

I’ve personally bought and made money from stocks that were down 80% most of the time I owned them – and never lost a wink of sleep.

But I changed my mind this month.

A colleague of mine named Dr. Richard Smith – founder of the investing service TradeSmith – studied the portfolio of recommendations from my Extreme Value newsletter. He told me that my performance would’ve been better if I had used trailing stops on every position.

I was skeptical, to say the least. So I tested Richard’s claim against Constellation. After all, this was my top stock pick as an analyst for Stansberry Research. It was hard for me to realistically imagine how much better things could’ve turned out.

I told my subscribers to sell their shares in November 2016 after the stock had dropped about 9%. At the time, the stock was trading around $153. If I had used a standard 25% trailing stop on Constellation when I first recommended it in 2011, my subscribers would have held it for another two years past the time I decided to sell.

We would have exited the position in December last year, selling for about $174 per share. Our 631% gain would’ve turned into a huge 747% winner (with dividends included for each). Take a look… 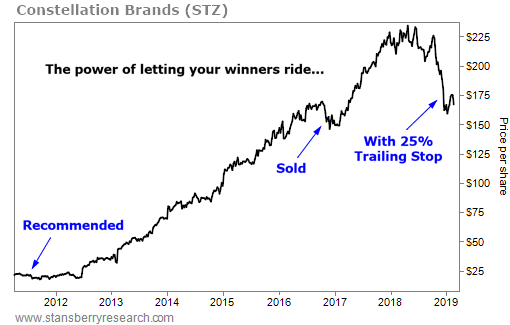 That’s an improvement of more than 100 percentage points on my prize recommendation.

Of course, not every position would outperform this much. But just imagine even a small amount of extra gains, spread across an entire portfolio. It’s easy to see how tremendous improvements are possible through the use of trailing stops.

From what I’ve learned, trailing stops can be one of the best tools you can use to remove human error from your portfolio… especially when fear starts to creep into your decision-making.

I suspect some readers will see my decision to use trailing stops as a betrayal of the value investor creed. I wish they’d reconsider. It’s much wiser for me – and will be much more lucrative for you – to make this change and start using trailing stops.

An investor’s purpose in life is to protect and grow wealth. By changing my mind and using trailing stops on most of my recommendations, that’s exactly what I plan to do.