Gartner Group (NYSE: IT) – Gartner Group is an information technology research and advisory firm. The company operates in four segments—research, consulting, events, and talent assessment. Gartner has operations all around the globe, but is headquartered in Stamford, Connecticut. The company was founded in 1979.

Gartner has seen its earnings grow at a rate of 16% per year over the last three years and analysts expect earnings to grow by 13% for the current year. Earnings grew by 31% in the most recent quarter.

The company’s sales have grown at a rate of 25% per year over the last three years and grew by 11% in the most recent quarter.

One of the most impressive stats for Gartner is the return on equity which stands at 57% currently.

The company also boasts a profit margin of 12.9%.

Gartner only has 12 analysts following it currently and that seems low for $12 billion company.

Of those analysts, eight rank the stock as a “buy” and four rate it as a “hold”. While that isn’t overly pessimistic, the low number leaves room for additional coverage that could help boosts the stock price. The short interest ratio is at 6.06 currently and that reflects some bearish sentiment toward the stock. If the price starts to climb the short sellers may have to cover their positions and that adds buying pressure to the stock. 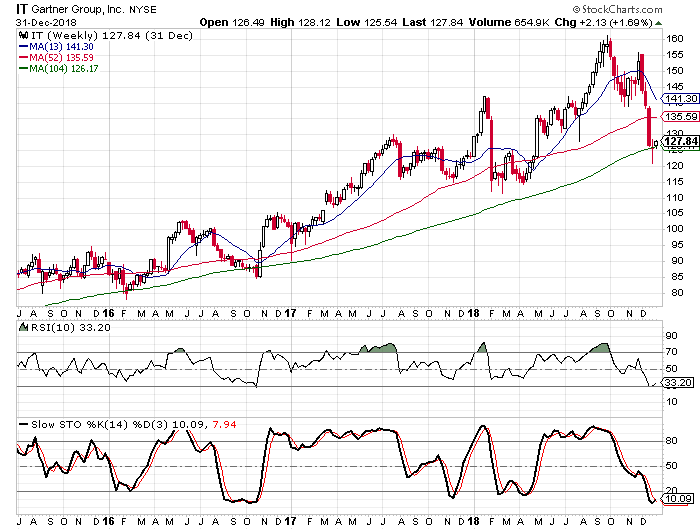 As we have seen with most stocks, Gartner has pulled back since the beginning of October. The stock closed last week right at its 104-week moving average. If we look back at when the stock has dipped below the trendline in the past, the time below the 104-week has been brief. We see it in early 2016 and again later that year. From October ’16 through July ’17, the stock rose over 50%.