Stocks have taken a beaten in recent weeks. That doesn’t mean the “Melt Up” is dead. We still expect a final frenzy and blow-off top to hit the market next year… with huge potential gains for investors.

Still, that doesn’t mean every sector will be a winner next year. And one group is actually setting up as a picture-perfect example of what to avoid heading into 2019.

History says this chunk of the market will likely underperform, even as the greater market melts up.

This group boomed for most of the year. The sector soared 14% through August, outperforming the broader market. Then, the bottom fell out…

Small caps have fallen 20% in a little more than three months. And the recent fall drove the sector to a new 52-week low.

Clearly, the trend is down. And longtime readers know that the trend matters…

Stocks that are moving higher tend to go on to make even higher highs in the short term. The opposite is also true – falling stocks tend to continue to make lower lows.

That’s why when the trend goes against you, it’s time to step aside. That couldn’t be much clearer than it is in small-cap stocks right now.

The sector is down roughly 20% since peaking in August. Take a look… 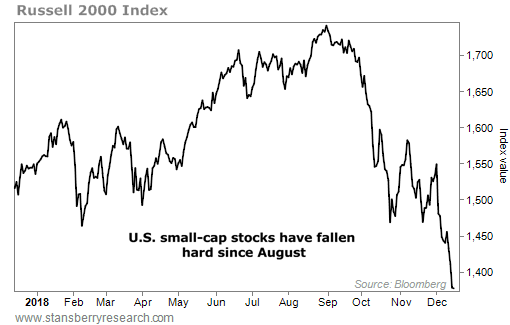 The massive sell-off started in September and has continued into December. Worse, small-cap stocks fell to a new 52-week low this month, too.

Since 1978, small caps have only hit a new 52-week low less than 1% of the time. It’s a rare occurrence and has historically meant major underperformance over the next year. The table below shares the full details…

Small-cap stocks have been great performers over the past four decades… returning 9% a year. But not surprisingly, you don’t want to buy when this group is making new lows. That has led to serious underperformance…

Specifically, similar occurrences led to practically zero-percent gains over six months… and an underwhelming 1% over the next year.

Today, small-cap stocks are in a downtrend. The sector recently hit a new 52-week low. And history says that means investors should avoid this sector right now.

My colleague Steve Sjuggerud still expects the Melt Up to kick in some time next year. But it won’t mean every portion of the market soars.

Small-cap stocks are setting up to underperform, despite the Melt Up. So this is one chunk of the market you should step aside from in 2019.