After years of rewarding investors with huge gains, many are now wondering if they should buy Apple stock in the wake of the recent sell-off.

At first glance, now seems like a terrible time to buy AAPL stock. Wall Street has turned very bearish on the company.

Over the past month, eight analysts have dropped their price target on Apple, while two have downgraded their rating on the stock from a “Buy” to a “Hold.”

U.S. President Donald Trump’s suggestion on Nov. 26 that he might extend his tariffs on Chinese imports to the iPhone and other Apple products, most of which are manufactured in China, put further pressure on the stock.

It’s hard to say for sure what’s going on with iPhone sales – Apple’s actual iPhone sales have been known to contradict gloomy analyst predictions – but using that metric is a short-sighted and inaccurate way to view Apple.

You see, this is a company in transition…

While iPhone sales will remain an important piece of Apple’s business for years to come, it will no longer be a primary source of growth. That role has passed on to the company’s services arm. It’s a point I’ve been making since at least 2016.

Coming to grips with this admittedly major shift in focus has become a sticking point for AAPL investors, Fitz-Gerald says, especially now that the company has said it will no longer break out unit sales for any of its devices.

“It’s the psychological adjustment between the lack of iPhone data which many analysts have fixated on for years and the services division, which is really what’s worth billions,” Fitz-Gerald told Stuart Varney on the Fox Business Network program “Varney & Co.” on Nov. 19.

Apple is no longer a “device company,” Fitz-Gerald said – a point he’s been making for several years.

“The real key from this moment forward is the monetization of 1.3 billion installed devices,” Fitz-Gerald said. “Not selling new iPhones.”

The numbers on Apple’s service business tell the story…

Not only will services be the source of much additional revenue, it will drive profits. Analysts estimate that the gross margins on Apple’s services fall somewhere north of 50% – significantly higher than the company’s current average margin of 38% to 39%.

And services is better for another reason: its steady, predictable revenue. When Apple sells a customer an iPhone (or a Mac or an iPad, for that matter), it can never be sure when that customer will be back to replace that device. Switching from selling standalone products to subscriptions is a big reason why Adobe Inc. (NASDAQ: ADBE) stock is up nearly 350% over the past five years.

Ultimately, this means plenty of growth ahead for Apple profits.

Huberty worked out how much Apple’s services business will add to profits (see chart). Over the next two fiscal years, Huberty expects services to add $2.23 per share in earnings (Apple earned $11.91 per share in fiscal 2018.) 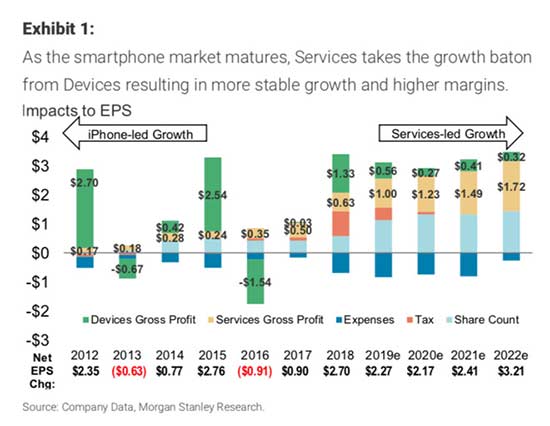 And there’s one more thing. One more sign that Apple has moved into bargain territory is that its Money Morning VQScore™ has risen to 4.45 – the buy range. As recently as Nov. 2, AAPL’s VQScore™ was 3.15 (OK, but not great). It only breached the “buy” range last week.

So the recent drop in the Apple stock price is a chance to jump in – or accumulate more if you already own some.

Here’s how investors should play this…

How to Buy Apple Stock to Maximize Your Gains

As bullish as he is on Apple stock, Fitz-Gerald sees a bumpy road in the short term. Given the current volatility in the markets, as well as the steady drumbeat of negative sentiment toward Apple at the moment, he believes AAPL could sink as low as $150 a share.

Obviously, that would be a great entry point, particularly if Apple reaches my $300 2020 target.

But there’s no guarantee it will drop that low, so here’s what Fitz-Gerald suggests:

Fitz-Gerald has one more option for those who feel AAPL is a bit pricey, or who want to get some exposure to Apple with less risk. And that would be the Red Oak Technology Select (NASDAQ: ROGSX) mutual fund.

As with the strategies above, he recommends waiting for Apple shares to fall into the $150-$175 range before pulling the trigger.

“With a 4.72% weight in ROGSX’s portfolio, Apple is a top holding,” Fitz-Gerald said. “That means you’ll substantially enjoy all of the upside you can handle, but at a fraction of the price and risk of buying Apple stock by itself. Plus, you’ll get a slew of other super technology companies at the same time.”