The earnings and sales growth numbers for Diamondback are impressive. Earnings have grown at an annual rate of 83% over the last three years. Earnings in the most recent quarter showed an increase of 26% over the previous year and analysts are predicting that earnings will grow by 32% for the year as a whole.

For the last three years, sales have grown by an average of 74% annually.

The profitability measurements are great as well, but the management efficiency ratings are average.

Another factor that attracted me to Diamondback is the short interest ratio.

The current ratio is at 5.81 and that is down from 7.58 in mid-October. The ratio didn’t fall because short interest declined either. The ratio fell because the average daily trading volume increased from 1.46 million shares to 2.07 million shares. If the stock continues to rally, the short sellers could extend or accelerate the rally as they cover their positions. 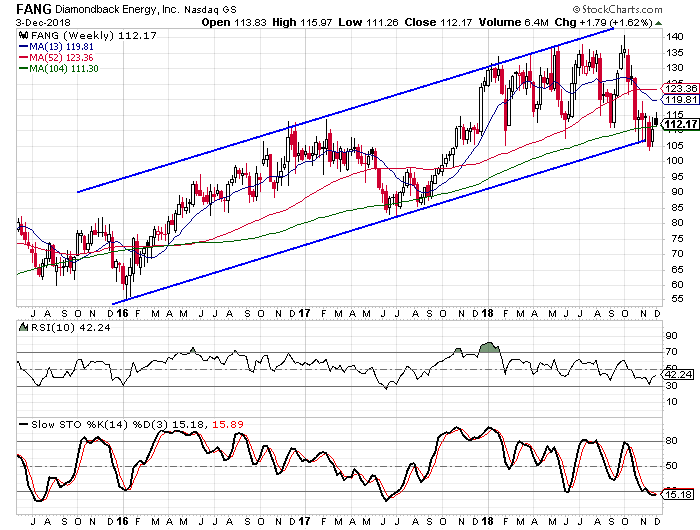 The weekly chart for Diamondback shows that the stock has been moving higher within a trend channel over the last few years. The stock has been moving sideways for most of 2018 and that has allowed the lower rail to catch up to the current price. We see that the lower rail is just below the 104-week moving average and that provides two layers of support for the stock to bounce off of.

Energy stocks have struggled in 2018, especially in the last two months. Seeing Diamondback maintain its upward trend and posting such strong fundamentals attracted me to the stock.

Suggested strategy: Buy FANG with a maximum entry price of $116. I would set a target of at least $150 over the next 12 months (for a potential return of over 30% from current prices). I would also suggest a stop at $103.