Debt is a four-letter word. It’s that simple.

Yes, it’s a useful tool when used properly and in the right amounts.

In the last 15 years, worldwide debt has more than doubled, up by nearly $150 trillion.

In July, the Institute of International Finance warned that global debt rose the most in two years, by $8 trillion in the first quarter of this year, reaching an astounding $247 trillion.

That number represents a staggering 318% of global GDP.

Much of it will never, ever get repaid.

As a result, the bond market, where the bull died in 2016, will become a bloodbath. Being long there will be outright dangerous to your financial health.

Holding the shares I’m going to show you, on the other hand, will pay you handsomely…

America Is at the Center of a Global Debt Storm

Thanks to Trump’s tax cuts and higher interest rates, the federal budget is increasingly underwater.

The most recent fiscal deficit is the largest in six years. What’s more, it’s widely expected that going forward, deficits are likely to grow thanks to last year’s tax cuts and increased spending.

There’s no question that the Fed’s gradual rate increases are making the existing debt more challenging to service, adding to the size of annual deficits well into the future. In fact, one of the biggest reasons the deficit is ballooning is the burden of higher interest payments.

But the United States is not alone… there are plenty of other guilty parties.

China’s massive growth over the last several decades has pushed that nation into second place worldwide for largest economy.

It’s been perhaps 2,000 years since the Chinese people have had such high relative living standards. China’s modernization and infrastructure have come at a blistering pace… but also at a huge cost.

Since the 2008 financial crisis, China has printed more money than the United States.

Yes, even more than the U.S. But that’s not the only problem.

See, a lot of Chinese borrowing is done in U.S. dollars. That debt is issued in dollar-denominated bonds. As its currency, the yuan, weakens, it gets tougher to pay back interest and principal in U.S. dollars.

According to a recent article by CNBC, the actual level of off-balance-sheet Chinese local government debt is likely a multiple of what’s been publicly disclosed, to the tune of nearly $6 trillion.

Local governments, in their bid to stimulate the economy and build out infrastructure, used LGFVs, or “local government financing vehicles,” to fund their projects. S&P 500 analysts believe a good chunk of the hidden debt lies in LGFVs.

China’s now stuck between the proverbial rock and hard place.

It wants to (and does) keep devaluing its yuan in order to cheapen all-important exports. Meanwhile, the cheaper yuan makes it more difficult to repay dollar-denominated loans.

And the United States and China are far from alone.

The Entire World Is Drowning in Debt Now

According to the IMF, ultra-low interest rates coupled with swelling global debt levels could be the undoing of markets and even the financial system itself.

Exploding public debt that resulted from mega bailouts and printing trillions to stimulate economies have limited the policy tools central banks have to deal with future crises.

The Institute of International Finance’s managing director, Hung Tran, commenting on the rate of debt growth, said, “The problem with the pace and speed is if you borrow or if you lend very quickly, the quality of the credit tends to suffer… The quality of creditworthiness has declined sharply.” 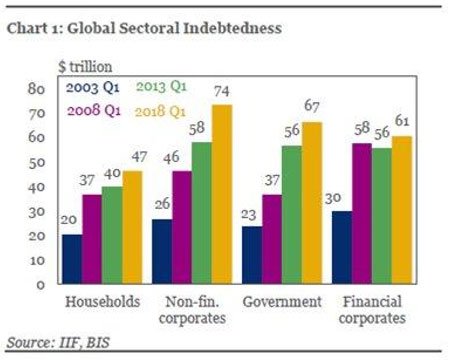 The bottom line is the bond bull market that began in 1981 and ran relentlessly uphill for 35 long years is dead and gone.

In just the three weeks from late September to mid-October, $1 trillion in bonds was wiped out, according to the Bloomberg Barclays Multiverse Index. 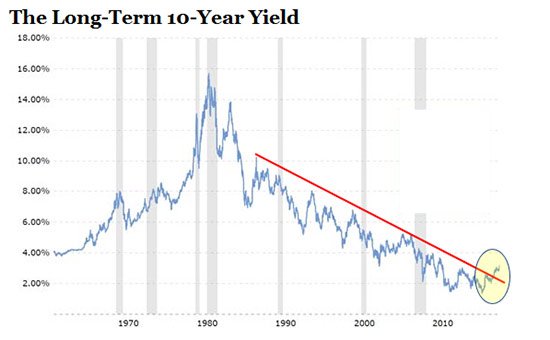 Shorting bonds is now a low-risk long-term trade, given that we’re in what’s likely a secular bond bear market.

It makes perfect sense to put at least a small portion of your cash allocation to shorting bonds.

A simple “one-click” option is to buy the iPath US Treasury 10-year Bear ETN (NASDAQ: DTYS).

The ETN has done a pretty good job of tracking the 10-year yield, having more than doubled in the past 27 months. And it has a lot higher to go yet.

Remember, global debt has gotten completely out of hand, and interest rates have clearly begun rising.

Astute investors know that a huge portion of worldwide debt will never be repaid.

It’s a position likely to serve them well for quite some time to come.