From checking your e-mail to posting pictures on social media, you use this technology every day.

Smartphones, computers, and radios all rely on it.

But despite its importance in society, the entire sector that designs and builds this technology has struggled recently.

In fact, it’s down roughly 4% this year. And it has underperformed the overall U.S. market so far in 2018.

I’m talking about this today because – based on history – the sector’s recent poor performance is likely coming to an end.

A major reversal is likely right around the corner. And when it happens, this group of stocks could soar 24% over the next year…

I’m talking about the semiconductor sector.

Again, these companies design and build computer chips that go in things like smartphones and computers.

Semiconductor stocks have been trending down in recent months. And the sector recently hit a new 52-week low.

But that’s not the case right now for semiconductor stocks. Today, history says the current downturn in semiconductors has likely run its course. 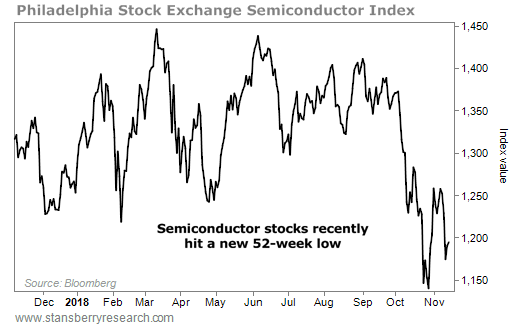 October was brutal for the sector. Semiconductor stocks were down 12% for the month. And the fall pushed the entire sector to a fresh low for the year.

You might think this is bad news. But history says it points to a buying opportunity.

Since 1995, the sector has hit a new 52-week low just a handful of times. And similar cases actually led to major outperformance. Take a look…

The sector has been an impressive performer over the past 25 years. But buying after similar 52-week lows more than doubled the return of a simple buy-and-hold strategy.

In short, similar cases have led to 15% gains in six months and 24% gains over the next year. Those are impressive numbers.

While we look at history to guide us going forward, I can’t recommend buying semiconductors just yet. We simply don’t have a strong uptrend in place.

However, history says buying after a new 52-week low is a good idea. That means when the uptrend returns, this sector could be a big winner over the next year.