What’s the most hated market in the world today?

It’s not China, despite fears of a trade war.

It’s not the U.S. either, despite fears of when the end will come for this near-decadelong bull market.

Heck, it’s not even Turkey or Venezuela – two countries in the middle of serious financial crises.

The answer, based on one measure, will likely surprise you. Investors have given up on a vitally important part of the globe. And that’s setting up a big opportunity.

If you want to know what investors think, follow the money.

If folks like an asset or market, they buy it. If they’re scared of it, they sell it.

Based on that simple idea, the most hated market in the world right now is Europe…

Investors have been pulling money out of European stocks for the past year. And the worst hit, not surprisingly, has been Germany.

Germany is especially important to watch. It’s the lifeblood of the European economy… So when investors worry about Europe, they’re likely to pull money out of German stocks.

That’s exactly what they’ve done. Germany saw the largest net outflows from exchange-traded funds (ETFs) in the world over the past year, according to Bloomberg. That means investors are getting out… and fast.

Germany is a proxy for all of Europe. But in this case, investors aren’t just selling German stocks… They’re selling Europe as a whole.

The simplest way to see this is through shares outstanding for the iShares MSCI Eurozone Fund (EZU). The fund holds stocks from France, Germany, Spain, Italy, and other European countries.

Its total share count has fallen sharply this year… down 34% in roughly eight months. Take a look… 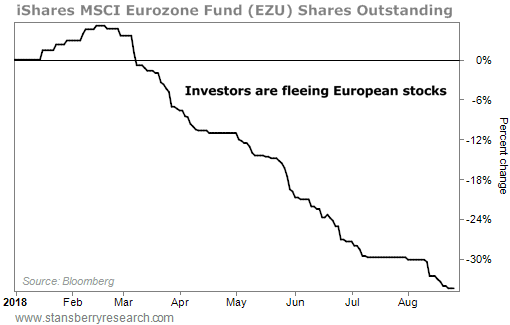 A falling share count means investors are pulling money out of European stocks. They’re scared. They want out… And they’re selling.

Hated stocks and investments can stay hated for months… potentially even years.

So we’ve found an easy way to get around that problem – one that shows us exactly when to buy.

This won’t surprise longtime readers… We wait for the uptrend to return.

Right now, Europe stocks are moving lower. EZU is down roughly 12% from its January peak. For a safe entry point, we want to see prices reverse. When that happens, the gains could be large.

You see, massively negative sentiment isn’t a buy signal on its own. But it does tell us we could see a big move higher when prices reverse. It shows that the rubber band is stretched and should bounce back dramatically.

Europe is the most hated market in the world right now. Our buy signal isn’t flashing yet. But we’ll likely see a big rally in European stocks, once prices and sentiment reverse.