Steel Dynamics (STLD) engages in steel product manufacturing and metals recycling businesses worldwide with a focus on the United States. The company operates in through three business divisions—Steel Operations, Metals Recycling Operations, and Steel Fabrication Operations. The company was founded in 1993 and it is headquartered in Fort Wayne, Indiana.

STLD has exhibited great earnings growth in recent years with an annual growth rate of 62% over the last three years and 143% in the most recent quarter.

Sales grew by 29% in the most recent quarter and by a more modest 9% per year over the last three years.

The management efficiency measurements are solid with a return on equity of 20.5%, a profit margin of 10.2%, and an operating margin of 12.3%.

There is a degree of pessimism toward the stock as evidenced by the short interest ratio of 3.4. STLD is also flying below the radar of many analysts as only 13 are following the stock at this time.

Nine of the 13 do rate the stock a buy, but given STLD’s fundamental performance and technical performance, I would expect a greater following. 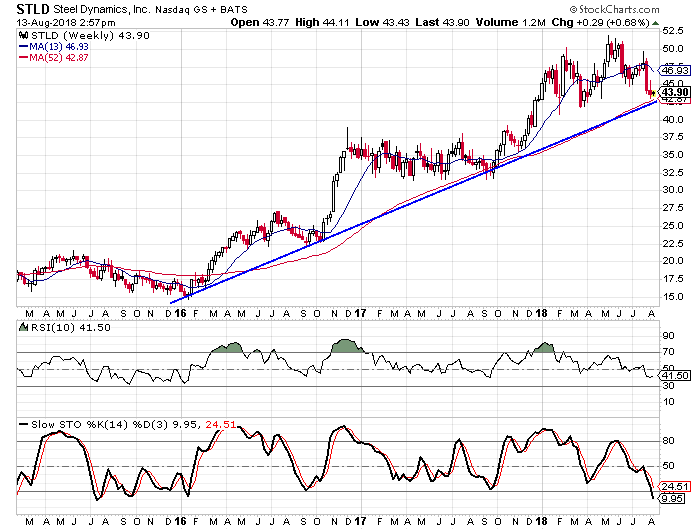 We see on the chart that STLD has been trending higher since the beginning of 2016. The stock has formed a trendline that connects the weekly closing lows all the way back to January ’16 and the stock is just above that trendline at this time. It also helps that the 52-week moving average is in lock-step with the trendline and that should provide a secondary layer of support for the stock to bounce off. The oscillators are approaching oversold levels and they are at levels that have marked turning points over the last few years.

Suggested strategy: Buy STLD with a maximum entry price of $46. I would set a target of at least $66 over the next 12 months (for a potential return of 50% from current prices). I would suggest a stop loss at the $41 level.