And in certain cities – like Denver – as much as 99% of homes are valued above the highest levels of the boom. 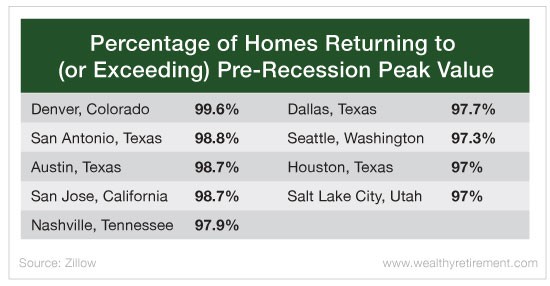 What does this mean for home buyers and sellers? Today, we’ll look at the current housing market in both Canada and the U.S. and how it will affect you.

In Canada, things are as ridiculous as ever in terms of price, but even that mega-bubble is getting ready to pop.

Last week, I was in Canada attending the sold-out Oxford Club Private Wealth Seminar in Whistler, British Columbia. I visit British Columbia at least twice a year because I have family there.

This time when I drove around several Vancouver neighborhoods, I noticed something I hadn’t seen in a while… “for sale” signs.

Vancouver has some of the highest prices on the planet for housing thanks to recent low interest rates and a two-decade-long influx of money from China. In a rush to get money out of China, buyers have dumped billions into Vancouver real estate to protect their wealth.

So while Vancouver home prices border on the absurd, a large percentage of homes are unoccupied.

How did this happen? In 1997, the British handed Hong Kong over to China. (I was there for the handover ceremony.) What followed was an exodus of cash looking for a home outside Chinese influence. As China opened up its economy further, more money began to flow out as well-heeled Chinese investors looked to investments that could not be clawed back by the government. Canada – primarily Vancouver – was an excellent choice, as it had a strong Asian community already established and was closer in proximity to China.

By moving their money, they sent prices soaring. What was selling for $1 million 10 years ago is now selling for three to four times that price. Finding a home in a good neighborhood for less than $1,000 per square foot is next to impossible. And all this for a place where it is rainy and dreary more often than not.

But that might be changing soon. Over the past two years, the British Columbian government has been trying to tamp down speculation via higher taxes for nonresident owners and special assessments. There just isn’t any affordable housing left for residents who aren’t millionaires. And that is impacting sales. Imagine looking at a house and knowing that you’re going to have to pay 15% to 20% more than the asking price just in nonresident taxes.

Lack of Buyers in the U.S.

Back in the States, I belong to a great local real estate network in central Florida. Homes in higher price ranges are not moving as fast, if at all. Prices are being reduced, and inventory is building. Apartment occupancy is at all-time highs.

Yet I still see builders buying up lots of property and putting up high-end condominiums and houses because demand is plentiful. Investors are looking for returns, and cash just isn’t cutting it. Outside of the stock market, real estate is a very attractive speculation… but only if you know where to look.

In places like Southern California, home sales have plummeted as buyers are up against red-hot prices bordering on unaffordability.

The Future of the Housing Market

Interest rates are climbing, and that will have an adverse effect on buyers eventually. Sales of existing homes inched up in June after falling during the spring. But even with the slight rise, they are lower than they were at the same time in 2017.

The housing market is still strong, and a 2007-style crash likely isn’t in the cards. There are fewer unqualified buyers today, and the economy is not at the tail end of a recession. But the signs of weakness after a strong seven-year run are beginning to show.

If you’re a seller, it may be time to show some flexibility.

If you’re a buyer, sit tight. It’s way cheaper to rent a nice house today than to buy one, especially in the higher price ranges. I believe that you’ll be able to take your pick of houses at better prices a year or two from today.

(Fair warning: I am usually early with my predictions. In October 2006, I wrote that we were two years away from seeing the bottom in the real estate market. I was a little off – the bubble did start bursting in 2007 but didn’t bottom out until 2010.)

Long-Term Investors Should Take a Look at This Stock

This Stock Has Plenty of Upside and is a Buy Today