As I fumbled through my wallet, looking for enough cash to pay for my Big Mac, I could feel the eyes on me.

Everyone else in line, I realized, was paying for their meals with their smartphones. In fact, nobody in the Hong Kong restaurant was even carrying a wallet…

When I sat down to eat, an advertisement on my placemat encouraged diners to download the McDonald’s app to pay for their meals with a simple scan.

You didn’t even need to walk up to the cashier to place your order.

It was a snapshot of a moment. But I quickly realized that it was just the tip of the iceberg.

Over the next few years, this idea will go global. And it all starts with two companies leading the way in China…

During our trip last month, we saw firsthand how little cash was changing hands in some of the country’s largest metropolitan cities.

In Beijing, some restaurants at a nearby mall food court politely turned us away for trying to use cash.

The city’s countless rental bikes cost just $1 for a 30-minute ride. But they didn’t have a slot for coins or credit cards. Instead, you scan the quick-response (“QR”) code with your smartphone, and off you go.

Amazingly, the QR code technology makes it possible for anyone to receive payments. Long gone are the days of beggars standing on the corner with a cup full of coins… or street musicians with their guitar cases open. Now, they simply display a unique QR code. Passersby can send a payment without hardly slowing down… 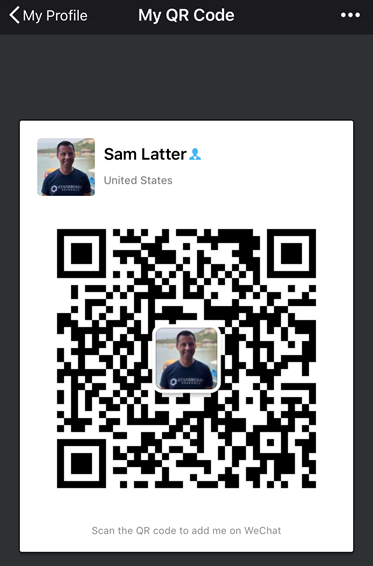 WeChat generates a unique, scannable QR code for every user

Two years ago, less than one in six Chinese people were using mobile payments. Research firm Statista says that by 2022, that number will triple to more than 47%… And in a country of 1.4 billion citizens, that means more than 650 million people will buy with their smartphones.

Yet this growth makes sense. Cellphones caught on lightning-fast in China. From 2000 to 2016, China went from 85 million cellphone subscriptions to more than 1.3 billion… a 1,400% increase. And more than 55% of China’s cellphone users have smartphones today.

As I said, this is only the tip of the iceberg. Mobile payments should make up a much bigger portion of the global e-commerce market over the next few years… 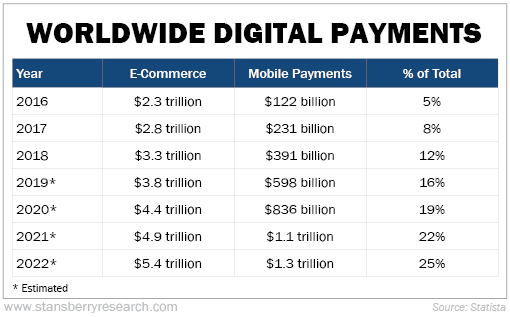 This will be a big, unstoppable trend over the next several years. It’s already started. And China is way ahead of the game.

Even better, you can already pick out the big winners in China…

Here in the U.S., dozens of companies make up the mobile-payments market. Consumers can send money through PayPal, Venmo, Google Pay, Apple Pay, Samsung Pay, and dozens of other services.

Regular DailyWealth readers are familiar with Tencent, which Steve predicted would soon be the largest company in the world in 2016. Tencent’s WeChat Pay has roughly 900 million monthly active users, while Alibaba’s Alipay service has more than 500 million of its own.

Alipay and WeChat Pay are even making headway in the U.S… In Las Vegas and New York City, tens of thousands of taxi cabs now accept them as a form of payment. And last year, some of the vendors at various Caesars Entertainment properties in Vegas started accepting WeChat Pay for everything from booking hotel rooms to buying food or tickets to shows.

As China’s population continues to turn to mobile payments instead of credit cards, personal checks, or cash, Alibaba and Tencent stand to benefit the most.

And from what I’ve seen on the ground in China, it’s not too late to get in on this rapidly growing megatrend…