Heading in to July, I went through the universe of stocks and found 187 stocks that met my fundamental criteria and had average trading volume of at least 500K per day.

After paring it down to 187, these are the seven stocks that I think should be targeted as buys in July.

There are various reasons for liking them- trendlines, trend channels, oversold, etc., but for one reason or another, these stocks stood out to me for their potential gains over the coming months.

AbbVie Inc. (NYSE: ABBV) –AbbVie is pharmaceutical company involved in the development, discovery, and manufacturing of drugs to fight autoimmune diseases, leukemia, hepatitis C, prostate cancer, and other diseases. The Company markets its products worldwide from its headquarters in North Chicago, Illinois. The company was incorporated in 2012. 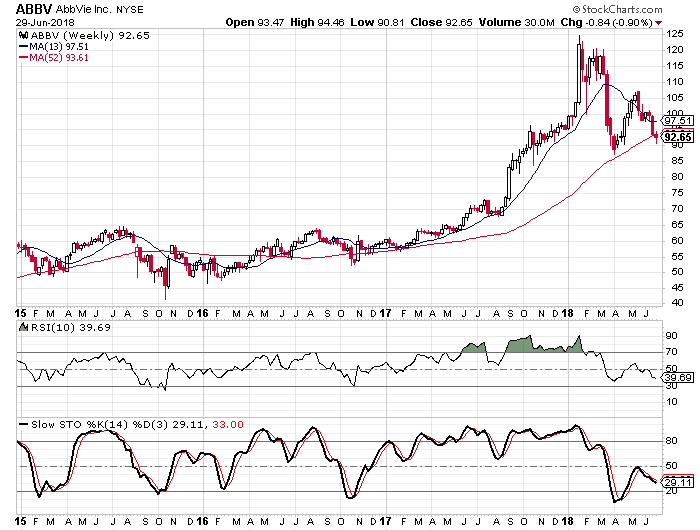 AbbVie just moved slightly below its 52-week moving average, but there is support in the $87.50 range where the stock put in a low in April. The pattern is looking similar to what we saw in late 2015 and early 2016. After the dipped the second time back in 2016, the stock rallied and gained over 30% from February to August of that year. I am looking for a similar move at this time. 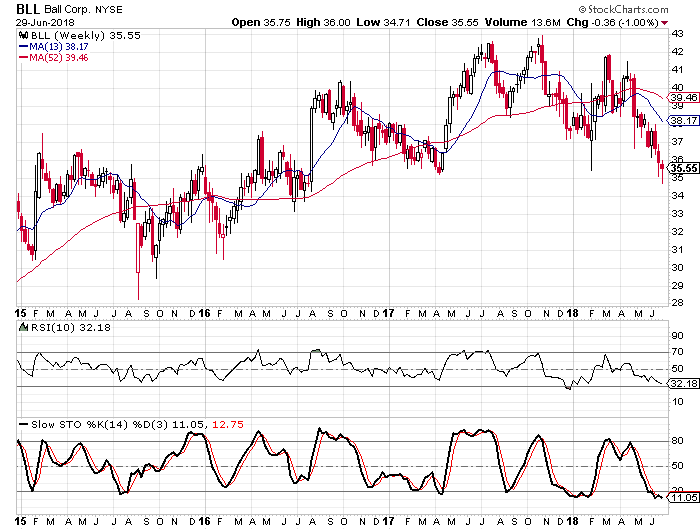 Ball Corp’s oscillators are both in or approaching oversold territory. The stock price has been hampered by the trade dispute and the possibility of rising materials cost on steel and aluminum. If there is an agreement reached, Ball could bounce higher very quickly. If a deal isn’t reached, there may be bigger things to worry about as I think we will enter a recession if all of the various tariffs are enacted by all the different parties. Another factor in my bullish outlook for Ball is the aerospace division. Should the Trump Administration follow through on the plan for a space force, the company stands to benefit. 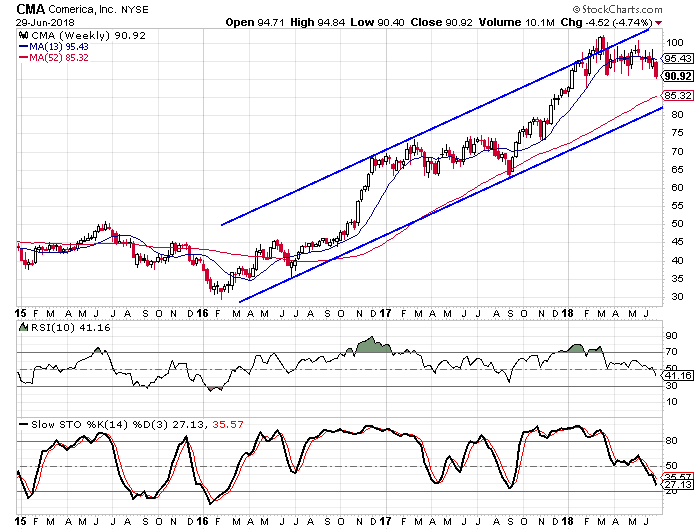 Comerica has been moving higher for the last two and a half years and the stock has formed a trend channel that has dictated the path higher. The stock is approaching its 52-week moving average and the lower rail of the channel. We see that the oscillators are both approaching oversold levels at this time. The indicators haven’t reached oversold territory since early 2016 as the stock has reversed before they got there. Thus the reason I think now is the time to act on the stock.

Callon Petroleum (NYSE: CPE) – Callon Petroleum is engaged in the acquisition, development, and exploration for oil and natural gas reserves in the Permian Basin in West Texas. The company has estimated proven reserves of 137 million barrels of oil equivalents. The company is headquartered in Natchez, Mississippi and was founded in 1950. 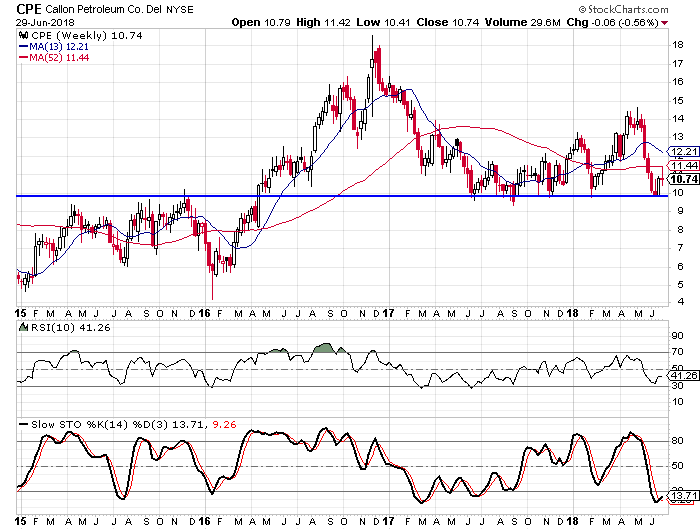 You can see on the chart that the $9.80 area has been serving as support for a year now. The stock recently dipped down to that level and has now bounced back. We also see that the weekly stochastic readings just made a bullish crossover. The question becomes is this like the various bullish crossovers in the stochastics in 2017 or is it like the one in early ’16? I think it plays out more like 2016 because the sentiment toward the stock is pretty bearish based on the short interest ratio of 7.27. Should the stock start rallying like I think it will, the short sellers will add buying pressure as they try to cover their positions.

Paycom Software. (NYSE: PAYC) – Paycom Software specializes in human capital management cloud-based software. The software provides companies with the analytics and functionality to manage employees from recruitment all the way to retirement. The products help with everything from time and attendance to healthcare benefits. Paycom was founded in 1998 and is headquartered in Oklahoma City, Oklahoma. 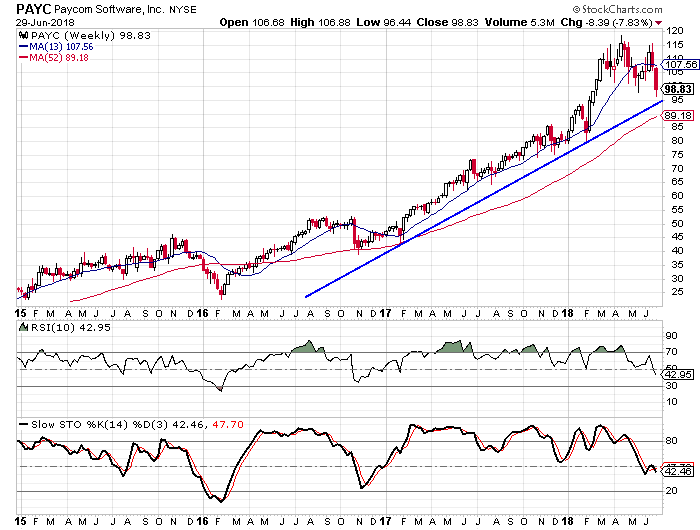 Paycom has been on an incredible run over the last two years. The stock has rallied from approximately $40 to as high as $119 earlier this year. The stock has seen a trendline form with the line connecting the lows from 2017 and the one from February of this year. The stochastics and the 10-week RSI have both moved below the 50 level for the first time since late 2016. The stock has dual support from its 52-week moving average and the aforementioned trendline. Like we saw with Callon, Paycom also has a big short interest ratio, only in this case it is almost double. The short interest on PAYC is 13.52. 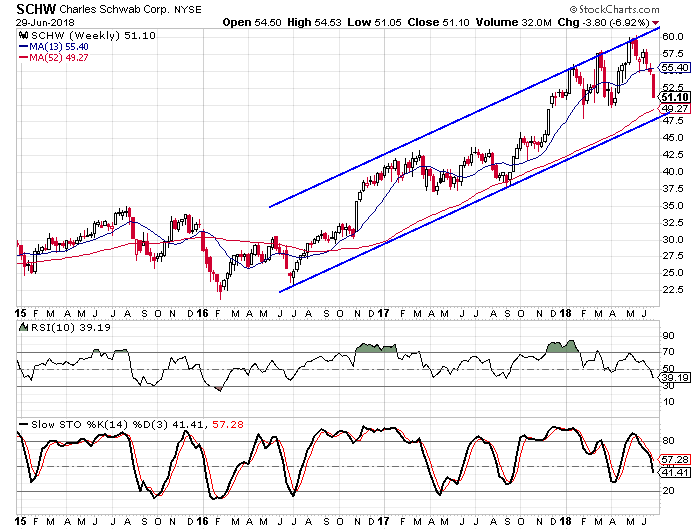 Over the last two years, Schwab has performed extremely well. The stock moved from under $25 to above $60 before suffering a minor pullback in the last month or so. Like we have seen with other stocks this month, Schwab has two layers of support—one from its 52-week moving average and a second one from the lower rail of a trend channel that has formed and dictated trade since June ’16. I look for the stock to remain above the $48 level and resume its upward trend in the coming months.

SolarEdge Technologies, Inc. (Nasdaq: SEDG) – SolarEdge, as the name implies, is involved in the solar energy industry. The Israeli company designs, develops, and sells DC inverter systems. SolarEdge’s products are used in residential and commercial buildings. The company’s products are distributed directly to builders as well as a network of solar installers. Founded in 2006, SolarEdge is headquartered in Herzliya, Israel. 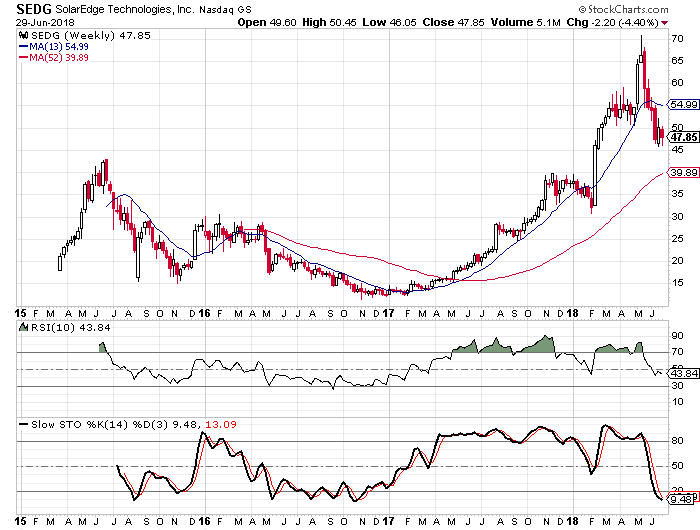 SolarEdge experienced what is probably the most impressive run of any of the companies on this month’s list. From the beginning of 2017 through its peak in May, the stock gained 453%. From the high in May to the low in June, the stock lost over 35%. I think the pullback is presenting us with a great buying opportunity. For the first time since the fourth quarter of 2016, the weekly stochastics are in oversold territory. I look for the stock to soar over the next year.