Micron has been one of the top stocks over the last few years in terms of its growth. Over the last three years the company has averaged earnings growth of 80% per year.

Analysts expect them to continue growing earnings at a rate of 36.9% over the next five years and by 137% for the current year.

Sales have been growing at a rate of 22% per year for the last three years.

All of those numbers are very impressive and as a result the sentiment toward the stock is pretty bullish.

In fact, the sentiment was so bullish that I wrote a bearish article for SeekingAlpha.com ahead of the company’s earnings report on June 20.

There was too much optimism ahead of the report. However, I also wrote that I was bullish for the stock on a long-term basis and that you would be able to pick up the shares cheaper in a week or two after the earnings report. 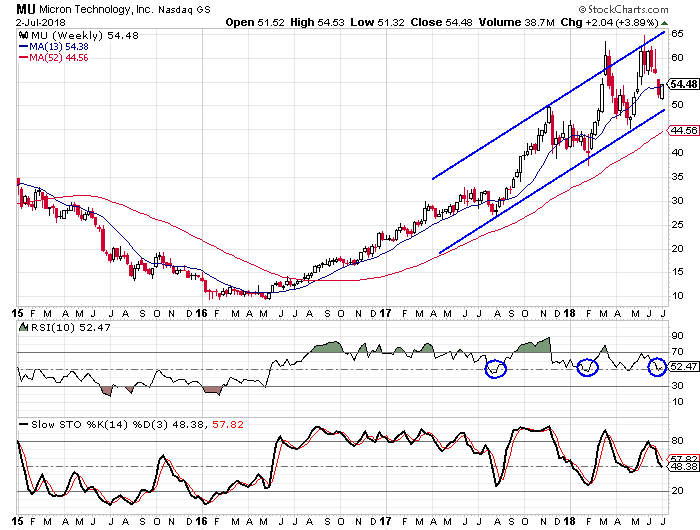 It turns out that I was right about being able to buy the shares cheaper. The stock is down just over 11% since the report—a report that beat estimates I should add. Even with the pullback, I still like the stock long term. It is still in the upwardly sloped trend channel that goes back to the first quarter of last year. There is also another factor that I took note of and that is the 10-week RSI dipping below 50 for only the third time in the last two years. The two previous instances marked major buying points for the stock.

Suggested strategy: Buy MU with a maximum entry price of $56. I would set a target of at least $75 over the next 12 months (for a potential return of 35%-plus from current prices). I would suggest a stop loss at the $48 level.