China Lodging Group (Nasdaq: HTHT) and its subsidiaries own and operate hotels in China. The ownership structures vary from leases, franchises, franchise and manage (manachised as they call it), and direct ownership.

The company operates over 3,000 hotels under these various structures.

China Lodging is headquartered in Shanghai, China and was incorporated in 2007.

HTHT has performed extremely well with regard to its management efficiency measures.

The company’s earnings grew by 86% in the most recent quarter and have grown at an annualized rate of 47% over the last three years.

Sales have grown by an average of 12% over the past three years. Analysts anticipate continued growth with estimates for an increase of 50% for this year. 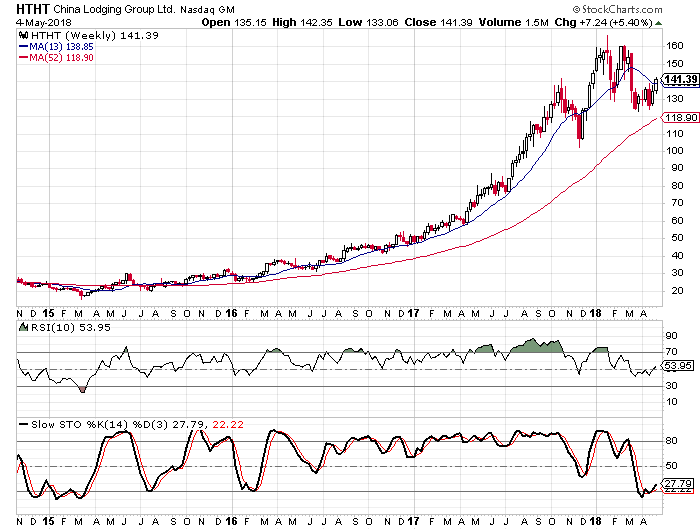 China Lodging has been above its 52-week moving average for going on three years now. The recent volatility brought the stock down just over 20% from the high to the low, but I think the worst is over. The pullback is giving us a great opportunity to own the stock at a discount. The weekly stochastic readings just made a bullish crossover out of oversold territory and the last time there was one of those was in February of 2016. The stock rallied 100% over the next year. I look for a similar move this time

Suggested strategy: Buy HTHT with a maximum entry price of $150. I would set a target of at least $225 over the next nine to 12 months (for a potential return of 60% from current prices). I would suggest a stop loss at the $120 level.