PetMed Express, Inc. (Nasdaq: PETS) — as the name implies, PETS is a pharmacy for pets. The company markets non-prescription and prescription medications and health products for dogs and cats. In addition to the medications, PETS also sells food, bedding, crates and other pet supplies through its website. The company was founded in 1996 and is headquartered in Delray Beach, Florida.

The fundamentals for PETS are some of the best I have seen in the past few years.

The company’s EPS grew by 83% last quarter and have averaged 19% growth over the last three years.

Analysts expect the EPS to grow by 54% this year.

Sales grew by 14% last quarter and are expected to grow by 10% this year.

The management efficiency stats are just as impressive as the growth with an ROE of 34.7%, an operating margin of 18.5%, and a profit margin of 15.2%.

Despite the positive fundamentals and tremendous growth, the stock has its doubters. 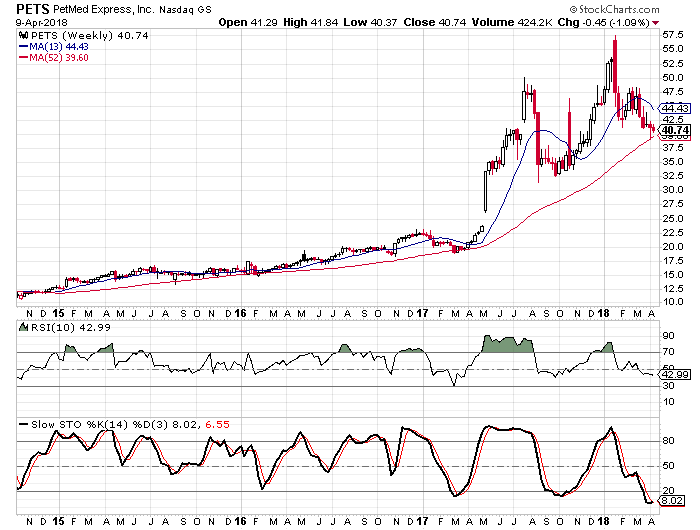 PETS has pulled back slightly since January, but that has brought it out of overbought territory and down to the 52-week moving average. The stock had a similar move last year and then it rallied from $20 to $50 in only four months. The stochastics are the lowest they have been since 2011. I love everything about the setup for this stock.

Suggested strategy: Buy PETS with a maximum entry price of $42. I would set a target of at least $55 over the next six to nine months (for a potential return of 35% from current prices). I would suggest a stop loss at the $37.50 level.