IQVIA Holdings (IQV) is based in Durham, North Carolina and was founded in 1982.

The company was formerly known as Quintiles IMS Holdings, Inc. and changed its name to IQVIA Holdings Inc. in November 2017.

IQVIA has seen earnings per share grow at a rate of 20% per year over the last three years while sales have grown at a rate of 19% over the same period.

EPS are expected to grow by 16% this year and next with analysts expecting average growth of 14.3% over the next five years. 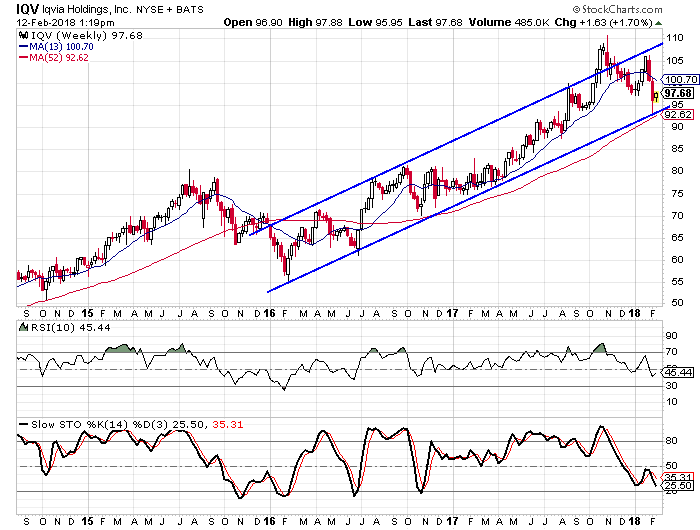 The sentiment toward IQV hit an extreme bearish reading last Thursday that was the lowest toward the stock since June 27, 2016. That previous low reading came just as the stock was hitting a low that would become the lower rail of the channel that has prevailed over the last few years. The stock gained almost 30% over the next six weeks.

Suggested strategy: Buy IQV with a maximum entry price of $101.00. I would set a target of at least $130 in the next three months, for a 30%-plus potential return. I would also set a stop-loss at $90. One note of caution, IQV does come out with earnings tomorrow (2/14/18), so if you are more risk averse, you may want to wait until after the earnings report before buying the stock.