Our investing experts have made some tremendous picks over the last several years, outperforming the S&P 500 by 100%, 200%, or even as much as 700% in the case of Money Morning Executive Editor Bill Patalon’s 2012 pick of Galapagos NV (Nasdaq: GLPG).

After a stock has already put up spectacular gains like that, conventional wisdom would tell you the party’s over.

“What goes up must come down” may be true for hot air balloons and triple axels, but it’s not always true for stocks. And it’s especially not true for stocks in spectacular companies that are built for long-term growth.

In fact, there are plenty of examples of stellar stocks that continued to outperform the S&P 500 for decades after investors thought they had already missed out on the big gains.

As Money Morning Chief Investment Strategist Keith Fitz-Gerald explained in January, many investors were sure that MCD’s improbable run was over after its stock price more than doubled in its first six years after going public.

That was 1971. Since then, McDonald’s stock has put up returns of more than 55,000%. And that’s not even counting dividends. 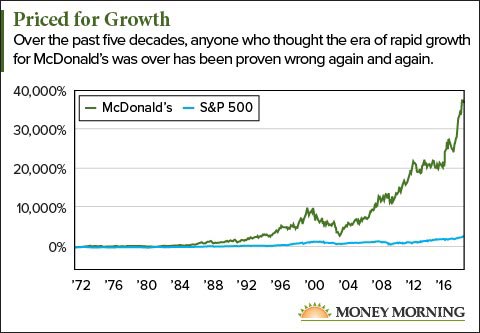 MCD’s ongoing success doesn’t mean that stocks don’t frequently get overvalued. So when we look at stocks that have gone on a run of success, we have to be able to separate the signal from the noise.

There are three signs Keith points to that identify stocks that are still worth buying, even if they’ve already delivered 1,000% gains.

Now that we know what to look for, here are some of Money Morning’s top-performing stock picks that have more big gains to come.

You Can Still Profit from These Top Performers

Kent brought that recommendation to Money Morning readers in December 2012, saying Valero was a strong candidate for a long-term hold. Shares have jumped 152% since then, compared to 98% for the S&P 500.

But that’s no reason to think Valero is finished delivering returns.

Energy is one of the Unstoppable Trends, and Valero is the premier independent refinery network in the United States. Its “rack price,” the spread between what it costs to produce oil products and the wholesale price, is the most efficient in the country. That’s partly because Valero is able to easily move between U.S. and foreign oil to get the best price.

On top of that, the company also owns profitable pipeline and terminal systems in the Gulf Coast and mid-continent areas.

In today’s changing energy landscape, Valero’s unparalleled efficiency and versatility put it at the top of its class. Kent renewed his recommendation in 2017, calling Valero one of a small group of companies that are “poised to become the biggest winners as energy truly goes global.”

“Valero is simply one of the best picks out there,” Kent concludes. So it’s no surprise that, even after a substantial rise, he still recommends it today.

There are plenty of reasons why investors who bought MSFT back then watched their money double twice since 2012. But it’s because the company offers “must-have” tech products for some of the biggest trending businesses that we can expect that kind of performance to continue.

You’re no doubt familiar with the tech giant’s many software products, but increasingly, its focus has been on the Azure cloud service. That investment is paying off, as Azure sales have grown by at least 90% in five straight quarters – including 98% in the most recent quarter.

Not just for cryptocurrencies, blockchain’s digital ledger of transactions that can be distributed but not copied is turning out to be extremely useful for businesses to improve their efficiency and digital security. And Microsoft’s Azure service has become a leading provider of blockchain solutions.

On top of that, Microsoft has established Azure as the go-to cloud software system for the legal marijuana industry. In an industry under tremendous scrutiny, any inconsistencies in accounting could mean big trouble for a marijuana-based business. Azure has been tailored especially to help these businesses keep their i’s dotted and t’s crossed.

“All that makes Microsoft a profitable investment in both mainstream business and bleeding-edge tech like blockchain and AI,” says Michael. 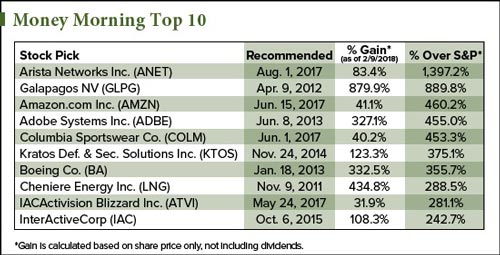 WebMD lists more than a half dozen ailments that can be treated with cannabis, including Crohn’s disease, glaucoma, and nausea for chemotherapy patients. It can also be effective in treating pain, which has huge implications in a nation that is currently suffering from an opioid epidemic.

Michael Robinson saw the potential back in 2014. That’s when he recommended GW Pharmaceuticals, the global leader in cannabis-based therapeutics.

But it still has plenty of room for growth.

After releasing a cannabis-based pain treatment in the United Kingdom, GW’s newest product, Epidiolex, is a potential breakthrough to benefit the 3 million Americans who suffer from epilepsy. The FDA fast-tracked the drug candidate to treat newborn children with the disease, and Michael Robinson expects approval to come this year.

In studies involving 750 children since 2015, 50% have shown a decrease in seizures – with limited side effects. GW is preparing to apply for FDA approval, setting the stage for a major windfall as this new drug changes lives – and changes attitudes about cannabis’ medical applications.

This will absolutely be a “must-have” product once it hits the market.

“I’m recommending it once more today,” Michael wrote on Nov. 7, “because I think there’s every reason for it to keep on delivering.”

Becton, Dickinson and Co. (NYSE: BDX): New blockbuster drugs hit the market all the time, and they provide major profits for their investors. Then again, only a small fraction of drugs that are developed ever reach FDA approval, let alone blockbuster status.

But if you own the company that makes the syringes to deliver those drugs, it doesn’t matter which drugs are successful and which are flops. You make money either way.

Enter Becton, Dickinson and Co., maker of a large line of medical products, including single-use syringes that are literally “must-haves” for countless patients in the 50 countries where BDX operates.

Since Keith Fitz-Gerald recommended this company to readers in September 2014, the stock has risen 106%. That’s compared to 38% for the S&P 500.

Not only does BDX outperform the major indexes during good times, it also holds up quite well during downturns. When the global recession brought the S&P 500 down 34.3% from June 2008 to 2009, BDX shares fell only 6.5%.

Since 2009, earnings have doubled, and the stock price is up 250%. And there is every reason to believe that it will continue to put up similar returns in the years to come.

BDX is also a dividend aristocrat: 2017 was the 46th consecutive year it raised its dividend. The current yield is 1.27%.