Twenty-five years ago, I experienced my first “Melt Up” as an investment professional…

There’s nothing like actually putting your hand on that hot stove to really feel the fire. And I was right in the middle of the fire…

In late 1993, I was a young stockbroker in the U.S., specializing in international stocks.

I didn’t know it yet… but man, oh man, I was in the right place at the right time.

It might sound hard to believe, but the big story in 1993 was China… Investors absolutely had to get in.

As a young stockbroker, I quickly learned that you almost never get incoming calls from strangers looking to open an account with you.

Never, that is, except when it’s late 1993 and you can buy “China plays” in Hong Kong for your customers. Then you’re Mr. Popular! The phone is ringing for you – multiple times a day.

We had “new leads” – potential customers – calling us like you can’t imagine.

We had no idea – but we were in the middle of a “Melt Up” in Hong Kong stocks.

Our group of young brokers was giddy coming to work every day. We were making more money than any people in their twenties probably should.

For us, in the middle of it, it felt a bit like bitcoin probably felt late last year. Everybody wanted to buy this market. And we were the ones who could get you in…

In November, and particularly December, it felt like the market was going up every single day.

Then January arrived… And the market started going down! Take a look… 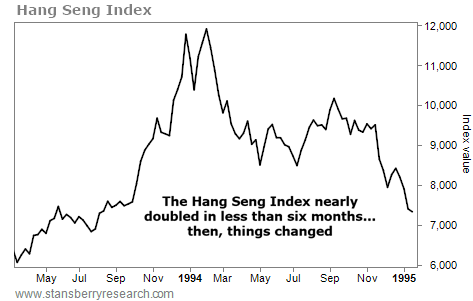 The market lost about 10% of its value in a month. All the talk was of a correction… “Is it over?” I wondered.

Heck no! The phones kept ringing. People who missed the December run-up scrambled to buy in January.

And then… by February, the market started going down again. The phones were still ringing. But it started to feel like the opposite of November and December…

February was awful. It felt like the market went down… on every day of the month.

It wasn’t easy to track your Hong Kong holdings back then. We didn’t have the Internet. So customers would call… every day. And I’d have to give them the bad news… every day.

Customers wanted to “double down” to “lower their average cost.” They were certain China would run back up. But they were wrong.

I wanted to hide under my desk. My monthly income – which was all based on commission – fell roughly 90%. And it stayed there for about nine months. It was awful.

I went from the top of the world to, well, nearly broke.

I learned two emotionally scarring lessons from that experience:

1. A Melt Up is a fantastic ride on the way up. And it is downright awful on the way down.

2. I want to be on board for the good times of a Melt Up. And I want to have a plan to avoid the Melt Down.

Since then, I have lived and traded through several Melt Ups. If you are willing to buy any asset class, in any country – like I am – then you will see the pattern repeat itself. You will recognize the signs.

Despite weakness in recent days, I still believe that for the first time since 1999, we are in a Melt Up in U.S. stocks.

Sure, you should sell if you hit your stops. But I believe the recent fall is just one of many corrections on the road to much higher prices.

It might not feel like it right now – but the Melt Up is still in place. Watch your stops… But stay long.

This bull market isn’t over yet!