Johnson & Johnson (JNJ) is a household name thanks to products like Band Aid, Tylenol, and Benadryl. The company also has prescription pharmaceuticals and medical device divisions as well. Johnson & Johnson was founded in 1885 and is based in New Brunswick, New Jersey.

With the massive selling pressure we have seen in the last few days, a company like JNJ seems like a safer bet than other companies right now. With over-the-counter names that could be considered consumer staples, as well as prescription drugs and medical devices, JNJ has a pretty steady revenue stream.

The fundamentals toward JNJ are incredibly strong, especially for a company that has been around for over 130 years.

The return on equity is 56.9%, the profit margin is 31.7% and the operating margin is 25.1%. The earnings per share have been growing at a rate of 5% over the past three years and analysts expect them to grow at a rate of 7.8% over the next five years. 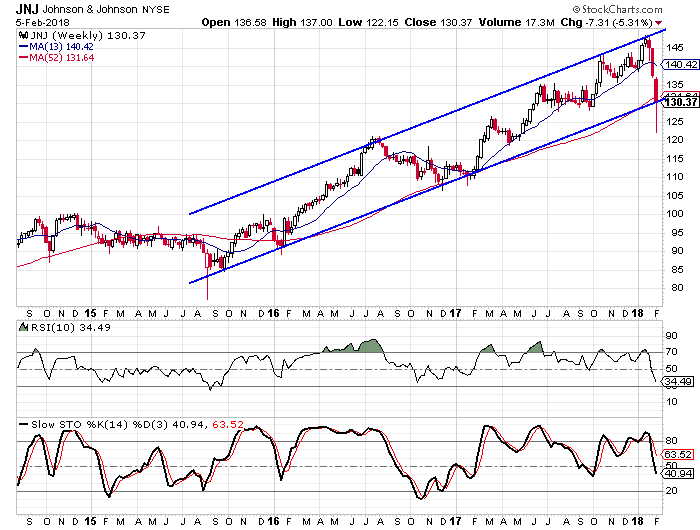 The sentiment toward JNJ has become decidedly more bearish in recent weeks and the SentimenTrader optix reading hit an extreme low last Friday. In fact the sentiment was at its lowest level since August ’15.

Suggested strategy: Buy JNJ with a maximum entry price of $135.00. I would set a target of at least $170 in the next six months, for a 30% potential return from current prices. I would also set a stop-loss at $115.