“In tonight’s State of the Union address, President Donald Trump will surely brag about today’s low unemployment rate,” I said on Tuesday.

I was right. As the president said, jobless claims recently hit a 45-year low.

And as I explained in Tuesday’s essay, we can learn a ton from the unemployment rate as stock investors…

Here are the three big things you need to know:

I explained the first two points earlier this week.

But this last point is even more interesting…

You can see it in this chart. It compares the performance of the benchmark S&P 500 Index with the annual change in unemployment. Take a look… 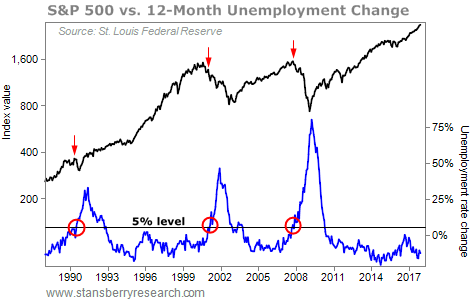 As you can see, whenever the annual rate went up by as little as 5%, it was time to get extremely cautious. (For context, one example of a 5% change would be if the unemployment rate rose from 4% to 4.2% over 12 months.)

Earlier this week, I explained that low unemployment is actually a concern for stocks, based on history…

But we really don’t want to own stocks when unemployment is on the rise. A rising trend in the unemployment rate has predicted the last three big falls in stocks over the last 30 years.

Where do we stand today?

More importantly, that rate is still falling. It’s down 13% over the last year. So this indicator is not signaling a stock market peak – yet.

Of course, this will change at some point. And a quick move to a higher unemployment rate will be a huge warning sign.

In short, this metric provides some great clues about where we are in the stock market…

Today, we are at a near-record low in unemployment. And if that number starts moving in the wrong direction – and quickly – then it will be a serious warning sign for stocks. We are not there yet.