In October 2015, I gave a speech in Las Vegas called “Welcome to the Melt Up.”

“The great bull market in stocks that started in 2009 will ultimately end in a dot-com style Melt Up,” I explained. Since then, I have hammered that theme home.

Here in 2018, it seems, all the Wall Street experts are getting onboard with my “Melt Up” idea.

Investors are now asking me when it ends. Here’s my take…

Long story short, we still have time. The ultimate market peak might not arrive until 2020. No kidding.

I like to give you simple explanations and simple answers, when I can. And I like to boil things down to one indicator for you to keep your eyes on, when I can.

It’s a bit harder with this question, but it’s still doable. Here’s the answer:

Over the past 30 years, the Federal Reserve has caused the three major peaks in the stock market…

Specifically, the Fed artificially caused a situation called an “inverted yield curve.” Once that happened, the market peaked more than 18 months later. Each time.

The reason is simple… You see, an inverted yield curve happens when short-term bonds yield more than long-term bonds. Normally, the reverse is true. Long-term lenders are taking on more risk, so long-term bonds tend to pay more in interest. When the opposite happens, it’s a bad sign.

Investors will debate endlessly over the causes of the peaks… Valuation… debt… stupid politicians… But when you crunch the numbers, it turns out the inverted yield curve has predicted stock market peaks better than any of these things. 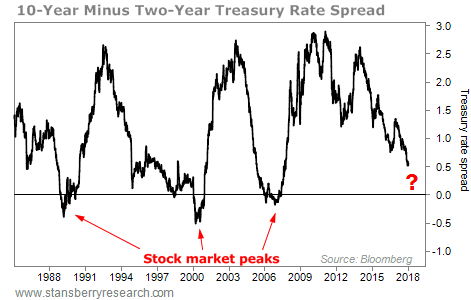 This is what happens when the Fed pushes short-term interest rates above long-term rates.

For more than a decade, we’ve been “in the clear” on this indicator. But last week, the interest rate on two-year Treasury bonds shot up above 2% for the first time since the financial crisis. That caused the line in this chart to accelerate toward zero.

Once it hits zero, the clock starts…

However, the last three times the line has hit zero, it took more than 18 months for the stock market to peak.

While the stock market peak could be pushed out to 2020 based on this one simple indicator, it doesn’t mean things aren’t risky…

For me, as soon as that line hits zero, I’ll start making some changes… tightening my trailing stops… and preparing for the end of the bull market.

People have been poking me in the chest lately, saying, “All right, Mr. Melt Up… what’s it gonna be now?”

It’s hard to boil down a lot of moving parts into one signal to watch. This one indicator is the best I’ve got to help you plan for the end of the Melt Up…