Longtime readers know investing in “World Dominators” is one of the best, safest strategies for making money in stocks.

These businesses sport thick profit margins and consistent cash flows, and they relentlessly raise their dividends.

They’re often the No. 1 companies in their industries. Today, we check in on one such company…

Rio Tinto (RIO) is one of the largest metals and mining corporations in the world. It produces copper, iron ore, aluminum, uranium, and more.

And just last week, it launched a new share-buyback program of nearly $2 billion.

As you can see in the chart below, shares of Rio Tinto are soaring. They’re up more than 40% in the past year… And they recently broke out to new 52-week highs. Watch for more gains from this World Dominator… 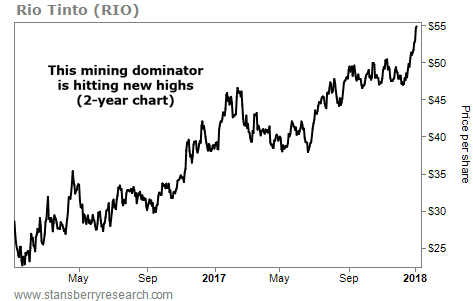