Editor’s note: The following alert uses technical analysis to identify stocks that look headed higher in a relatively short period of time, typically 1-6 months. These are the kind of short-term opportunities Trades of the Day subscribers hear about daily. Even though our risk is well-defined, these trades aren’t for everyone. As such, if you decide to follow along with the trade below, mind your stop losses and never invest any money you can’t afford to lose.

Oil-field service giant Halliburton Company (NYSE: HAL) shows signs of an upcoming price surge after a pullback according to its latest charts.

Bullish Indications
#1 IH&S Breakout in Daily chart: As you can see from the daily chart of HAL below, the stock has broken out of an Inverted Head and Shoulders (IH&S) pattern. An IH&S pattern is a strong bullish pattern and indicates that the stock may move higher in the short term.

#2 Double Bottom Pattern: In the daily chart of HAL, there is a Double Bottom pattern breakout. This is marked in the chart in purple color. A double bottom pattern is a bullish pattern and indicates that the stock price may increase in the near future. 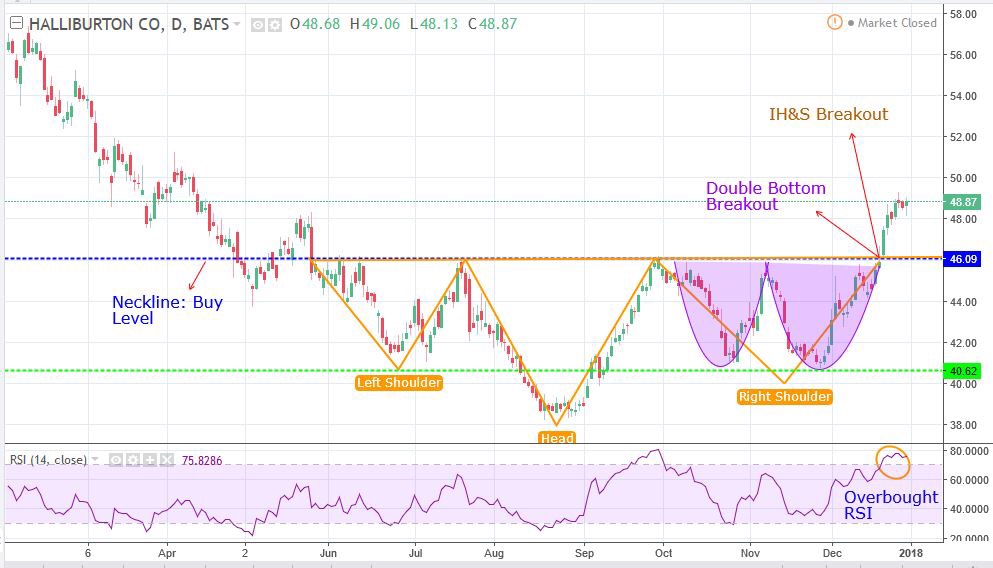 #3 Weekly IH&S Breakout: The weekly chart of HAL shows that it has broken out of an Inverted Head and Shoulders pattern.

This is marked in the chart below.

Since then the stock has been consolidating and has formed an IH&S pattern on the weekly chart.

This indicates that the earlier uptrend may resume.

#4 Above 50 SMA: The weekly chart of HAL shows that the stock is currently trading above its 50-week SMA, which is marked in pink color. This indicates overall bullishness of the stock. The stock is also currently in an uptrend as indicated by the light blue color trend line. There is a good support near the 50-Week SMA. This also coincides with the neckline of the two pattern breakouts, IH&S and Double bottom pattern (on the daily chart), making it a strong support level. 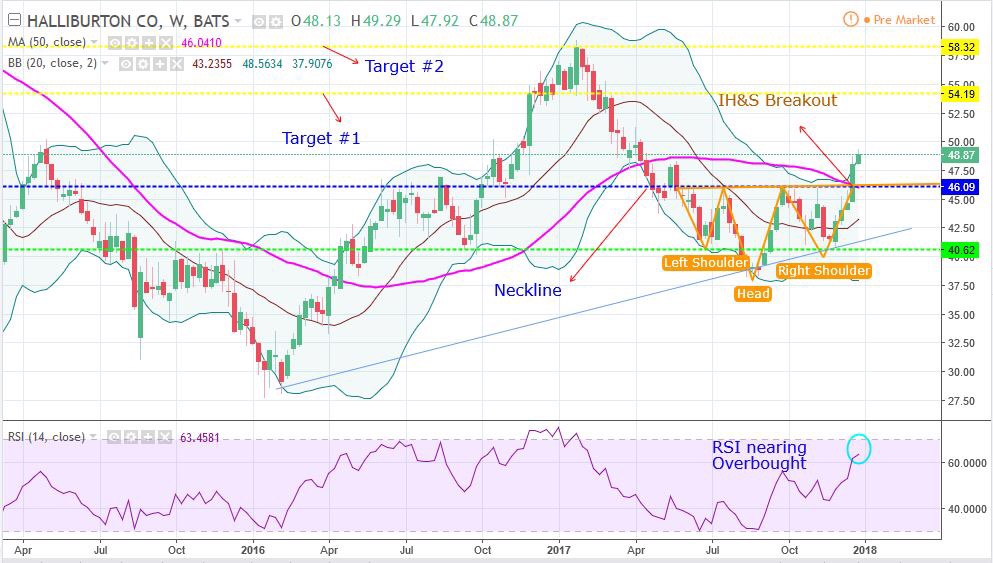 Indications of Possible Pullback
The stock seems to be set for a slight pullback due to following reasons.

• RSI in daily chart is currently overbought.
• RSI is nearing overbought levels on the weekly chart.
• The weekly chart shows that the stock is currently near the upper Bollinger band.
• A stock also typically retests its pattern breakout level before resuming its uptrend.

The stock may pull back and correct until the support level of $46.05 which is the neckline support and 50-week SMA support level.

Recommended Trade (based on the charts)
Buy Price: If you want to get in on this trade, you can purchase shares of HAL when the stock pulls back to the neckline of the pattern breakout. This is near $46.05.

SL: To limit risk, place a stop loss at the low of the shoulder of the IH&S pattern. This translates to $40.90.

Risks to Consider
The stock may reverse its overall trend if it breaks down with high volume from the neckline of the Inverted Head and Shoulders pattern. The sell-off of the stock could also be triggered in case of any negative news, overall weakness in the market, or any regulatory changes in the sector.