The political fervor in this country seems to be more intense than at any other point I can remember in my life.

One of the more pertinent “talking points” that comes up often is regarding jobs, specifically President Trump’s desire to keep/create more of them in the United States.

[ad#Google Adsense 336×280-IA]While an admirable goal, what if you could put yourself in a position where you didn’t need a job at all?

Moving from the working class to the investor class allows one to bypass the need to have a job, which means one can pay their bills and generally go about their life without concern over whether or not they can keep/have a job.

Not only that, the investor class experiences many benefits that the working class doesn’t: a more favorable tax scheme, more influence, and more time to better themselves through the realization of their potential are just a few examples.

Indeed, I’ve personally moved from the working class to the investor class, experiencing these benefits (and more) personally.

My real-life, real-money portfolio that generates five-figure passive income on my behalf allow me to live a job-free life.

This portfolio generates this income passively because the portfolio is chock-full of high-quality dividend growth stocks.

These stocks essentially “pay me” to own them.

That’s a lot better and easier than any job you’ll ever find!

You can find more than 800 US-listed dividend growth stocks by checking out David Fish’s Dividend Champions, Contenders, and Challengers list, which is a fantastic compilation of stocks that have paid increasing dividends for at least the last five consecutive years.

Dividend growth investing is the strategy I use to buy me my freedom and job-free life because it basically involves investing in wonderful businesses that share their growing profit with shareholders in the form of growing dividends.

After all, it’s usually not a very good idea to invest in a company that isn’t profitable, or growing profit.

And if a company is growing profit, shareholders deserve their rightful share of it.

There are companies out there that have paid increasing dividends to their shareholders for more than 50 consecutive years.

Just think of the profit growth that it would take to support that kind of behavior. You can’t write ever-larger checks without ever-larger cash flow.

Obviously, that’s a hallmark of quality.

And it means that a company that can do that is selling products and/or services that are increasingly in demand across multiple generations, which is a quality that doesn’t disappear overnight.

Moreover, the growing dividend income one can collect from a collection of high-quality stocks could support one’s lifestyle, rendering them financially independent.

Save and invest aggressively and early enough, and one could be financially independent pretty early in life, thus being in a position to mostly ignore political (and other) noise.

Your ears (and your wallet) will thank you!

Well, that’s what today’s article is all about.

Knowing price only tells you how much money something costs.

But knowing value tells you how much something is actually worth, which is obviously the much more important piece of information.

When it comes to dividend growth stocks, undervaluation is very appealing.

That’s all relative to what the same stock would offer if it were fairly valued (price and value are equal) or overvalued (price is above value).

First, price and yield are inversely correlated; as price drops, the yield should rise. All else equal, a lower price will result in a higher yield.

In addition, long-term potential total return is given a boost via the “upside” that exists between the lower price paid and the higher intrinsic value of a stock.

If you pay $50 for a stock that’s deemed to be worth $75, you have $25 worth of “upside” that very well could be captured if/when the stock market realizes the mispricing and more appropriately prices the stock (moving price and value closer to alignment).

That’s in addition to whatever organic price and value increases are realized as the company sells more products and/or services, becoming worth more as its profit and dividend increases.

Meanwhile, paying much less than what a stock is worth bakes in a margin of safety, or a “buffer”.

The company could misstep or do something that wasn’t originally anticipated, yet you would still have a lot of room to work with before the stock’s value drops to or below the price you paid.

Said another way, a margin of safety presents an investor with a buffer that allows a company some room for error before the stock/investment becomes worth less than the investor paid.

If you pay fair value or more, you lose that buffer.

Long-term investors should obviously aim to achieve these benefits whenever possible.

One of the highest-quality and most well-known companies in the world, Nike has become practically synonymous with sport, competition, and winning.

Extremely lucrative partnerships with successful athletes like Michael Jordan, Tiger Woods, and LeBron James have cemented Nike’s legacy; however, the company continues to innovate via new products, and they remain committed to partnering with the right athletes.

It’s this combination of innovative products/design and powerful marketing that provides Nike with such strong competitive advantages.

Their incredible brand power allows them to price their products at a premium.

Indeed, Nike has increased its dividend for 15 consecutive years.

Over the last decade, the company has grown its dividend at an annual rate of 14.7%.

With a payout ratio of just 30%, there’s still plenty of room for double-digit dividend growth moving forward (especially after factoring in underlying profit growth, which we’ll go over).

The only potential drawback regarding the dividend is the yield.

At 1.37%, there’s something to be desired if you’re an investor that’s interested in or in need of more current income from an investment.

However, this is almost 20 basis points higher than Nike’s five-year average yield.

So that low yield is at least higher than what it usually has been, on average, over the last five years.

There’s often a trade-off between income and growth, with most stocks offering more of one or the other. In this case, Nike offers more growth than income.

That growth, though, also shows up when looking at revenue and profit, which offers considerable dividend safety.

We’ll now look at Nike’s top-line and bottom-line growth over the last decade, and we’ll compare that historical growth with a forecast for profit growth over the near term.

Combining that historical growth with anticipated near-term future growth should give us a pretty good idea as to what Nike’s overall earnings power is.

Both revenue and EPS growth over the last decade is impressive, although the bottom line grew a bit faster thanks to a combination of share buybacks and expanding margin.

Nike reduced its outstanding share count by approximately 14% over the last decade. And profitability has never been stronger.

Looking out over the next three years, S&P Capital IQ believes Nike will compound its EPS at an annual rate of 13%, which is right in line with what we see transpired over the last 10 years.

Nike’s quality further translates over to the balance sheet.

The company’s long-term debt/equity ratio is 0.16, while the interest coverage ratio is north of 58.

It should go without saying that Nike’s financial footing is very solid – the balance sheet is just incredible.

Although footwear, which makes up the bulk of Nike’s sales, is a low-margin business, Nike squeezes more out of that business than any competitor I know of.

Overall, I can’t think of many companies that are more worthy of a long-term investment than Nike.

However, the stock’s current yield is relatively high, while the valuation is as low as I’ve seen it.

Nike’s stock is trading hands for a P/E ratio of 21.90. That compares very favorably to the stock’s five-year average P/E ratio of 26.0. Investors are also paying much less for Nike’s cash flow than they typically have, on average, over the last three years. And as noted earlier, the yield is higher than its own recent historical average.

So the stock does look relatively cheap, but how cheap might that be? What’s a reasonable estimate of its intrinsic value?

A two-stage model was used to account for the dynamic between the low yield and high growth rate.

That terminal growth rate is on the high end of what I allow for, but I think Nike qualifies as one of the rare companies that deserves the benefit of the doubt.

Nike actually has room to exceed my DDM analysis expectations, as is the case when you see what they’ve done over the last 10 years. Even the most recent dividend increase was over 12%.

However, I like to compare my valuation to that of what professional analysts have come up with, which adds value, honesty, and perspective to the discussion.

Morningstar rates NKE as a 3-star stock, with a fair value estimate of $58.00.

I came out the most conservative here. Again, I think Nike can exceed my expectations, although I always like to err on the side of caution. Nonetheless, these three numbers average out to a final valuation of $56.24, which would indicate the stock is potentially 7% undervalued right now. 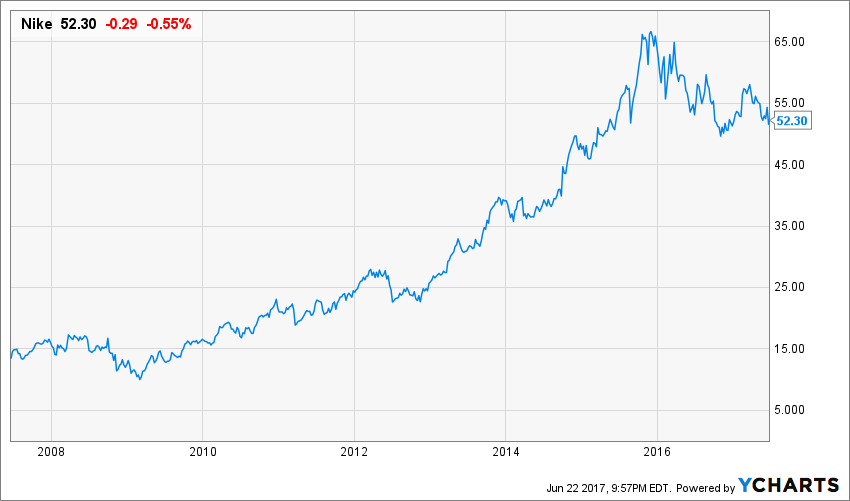 Bottom line: Nike Inc. (NKE) is one of the highest-quality businesses in the world. There are very few brands in this echelon. And their brand power has never been stronger, as evidenced by recent growth and margin expansion. Although the stock might not be as undervalued as others on the market right now, it’s arguably one of the best long-term investment opportunities of all. With 7% upside on top of a yield that’s higher than its recent historical average, this dividend growth stock deserves a good look here.