The massive growth potential of China’s economy could turn savvy investors into millionaires within five years, especially as China kicks its $5 trillion spending plan into gear. Today, we’re bringing investors one of the best China stocks to buy in 2017 to capitalize on that tremendous spending growth.

China is already the largest economy in the world in terms of GDP (in current purchasing power parity, or “PPP dollars”).

And China is launching a new economic plan that could reward investors with life-changing profits.

Before we get to one of the best China stocks in 2017 to harness that profit potential, here’s how China’s economic growth could mint a new class of millionaires…

You see, China is transitioning from a rural, agrarian economy to a modern manufacturing power. So its growth is much more dramatic than developed countries like the United States.

China’s GDP has skyrocketed 1,800% since 1990. Even though the United States still had the largest economy during that time, its economy grew only 210% during the same time.

That’s why investors turn to emerging economies like China’s to find once-in-a-lifetime profits.

While its growth in the 1990s was dramatic, China continues to grow at a staggering pace. Since 2006, China’s annual GDP growth rate averaged 9.3% a year, compared to just 1.6% for the United States.

That economic growth is a boon to Chinese businesses and companies that sell to the Chinese market.

Just look at the Chinese auto market. Since 2009, China has had the biggest passenger car market in the world. Even American car companies are selling more cars there than in their home markets. In 2016, General Motors Co. (NYSE: GM) sold 3.87 million cars in China, compared to 3.04 million in the U.S. market.

All of this growth has been a huge catalyst for Chinese stocks. The PowerShares Golden Dragon exchange-traded fund (Nasdaq: PGJ) is up 30% in 2017 alone. For comparison, the Dow is up 7.7% this year and trading within 100 points of its all-time high.

And this soaring Chinese economic growth is going to continue.

China is about to undertake a new economic initiative that will kick its economy into overdrive, making the top China stocks one of the best places to invest for mega profits…

China’s “One Belt, One Road” Initiative will inject $1.4 trillion dollars into infrastructure and connect China to trade partners along the new Silk Road.

But Keith says this is a conservative estimate. The real price tag could be over $5 trillion.

While that sort of money is creating an investment opportunity of its own – General Electric Co. (NYSE: GE) is “laser-focused” on winning contracts there – the Belt and Road Initiative is designed to kick China’s economic growth back into overdrive.

China’s infrastructure spending across the new Silk Road is really an investment to open up new markets and customers for Chinese firms while expanding the influence of Chinese leadership on a global scale.

And the One Belt, One Road Initiative is a global undertaking. 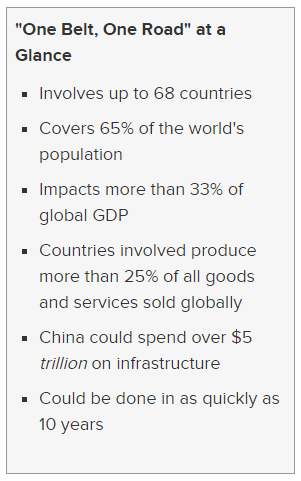 The completed plan could involve 68 countries across Europe, Asia, and Africa. That would directly connect roughly 65% of the world’s population and over a third of the world’s GDP to China.

But Keith says this once-in-a-lifetime opportunity won’t last much longer. By the time the mainstream media starts taking it seriously it will be too late to catch most of the profits. That’s why Keith says investing right now is the only option.

“Not tomorrow. Not next month. Not next year. Today.”

To help you do just that, we’re bringing you one of the best China stocks you can own right now. Our China stock pick could bring you over 40% gains this year alone, and you don’t have to buy it on a Chinese stock exchange, either…

The One China Stock You Need to Own Now

Alibaba Group Holding Ltd. (NYSE: BABA) is our top stock to buy to profit from China’s growing economic might.

“One share of Alibaba bought today can turn you into a millionaire down the road,” Bill said.

One big reason behind that bold prediction is BABA’s ability to capture China’s e-commerce market, just like Amazon.com Inc. (Nasdaq: AMZN) has in the United States. And since China’s economy is now larger (in PPP) than the United States’, that’s going to make it a profit-generator for years to come.

BABA already leads China’s e-commerce industry, and as China’s economy continues to grow, so will the number of online shoppers. China’s e-commerce market could amass sales of $2.4 trillion by 2020, according to eMarketer, meaning BABA has incredible growth potential.

Alibaba already has 454 million users in China, and the new Silk Road could expand Alibaba’s reach to countries across Asia and Europe, too. In fact, Alibaba just purchased Lazada Group SA, an e-commerce business operating in Southeast Asia. That could add 200 million more users to BABA’s user base and potentially even more as economic integration across Asia grows.

But BABA does a lot more than just e-commerce, and that sort of diversity will help investors take advantage of China’s growth during its new Silk Road expansion.

“Alibaba is working on advanced artificial intelligence, autonomous vehicles, and next-generation technologies that will bolster China’s economy for decades to come,” Fitz-Gerald said.

The Belt and Road Plan will help Alibaba expand its customer base on a global scale, all while the Chinese government foots the bill. And BABA’s move into mobile payments will help them tap into new markets across the Belt and Road, too.

The stock is up nearly 100% since Bill re-recommended buying BABA in January 2016.

“But for folks willing to take the ‘long view,’ that 100% gain is just the appetizer,” he said.

Wall Street is bullish on the stock too. Analysts at Raymond James are projecting it could hit a price target of $190 in just a year, a 42% gain from its current price of $134.12.