Today, individual investors can access more information than ever, more quickly than ever.

Yet they continue to dramatically underperform the markets.

[ad#Google Adsense 336×280-IA]According to CNBC, individual investors underperformed the S&P 500 again in 2016. Were you one of them? What went wrong?

The underperformance was huge…

I hate to say it, but I’m not surprised.

It comes down to cognitive biases that investors hold in their minds.

For instance, I recently began a presentation at an investment conference by talking about basic 25% trailing stops… and how even a simple trailing-stop strategy can limit losses. Very quickly into the presentation, an attendee asked if I use a 20% gain to lock in my profits.

I explained that there is something even more essential than limiting losses… You must learn to un-limit your gains.

Many investors zero in on a specific percentage that they believe is reasonable for their profits and sell when the stock hits that target. In other words, they unconsciously act against their own best interests by limiting their potential gains.

That’s a terrible mistake. To show you why, let me give you an example…

In mid-2011, Stansberry Research analyst Dan Ferris recommended beer and wine maker Constellation Brands (STZ) to his Extreme Value subscribers when the stock was trading at $21.24.

Dan held the position through a startling drop in early August, and then through a strong climb back up. By the end of March 2012, he was sitting on gains of around 15%.

But after that, things took a turn for the worse… Just one month later, those gains were completely erased. And by the beginning of June, the position was down more than 10%.

I see this kind of situation all the time. An investor gets some decent paper gains… and then hits a rough patch. All too often, he panics and bails.

But Dan didn’t blink. His focus is on steady businesses trading at good values. He didn’t lose that focus, and as you’ll see, he was rewarded.

My point today is that you can use an even simpler method to limit your losses – and un-limit your gains. 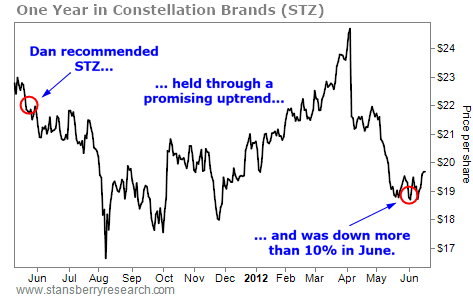 You can see STZ never fell 25% from its April high, or even from Dan’s original recommendation. It came close. But if you had used a 25% trailing stop loss – that is, if you decided to sell only when the stock fell 25% from its highest recent price – you would still be in the position. You wouldn’t have had to think twice.

Not everyone realizes this – or understands how to use a simple stop loss.

Dan could have recommended selling at any point that year. Instead, he un-limited his profits… and held on to the position. A little less than a month later, it was up 35%. 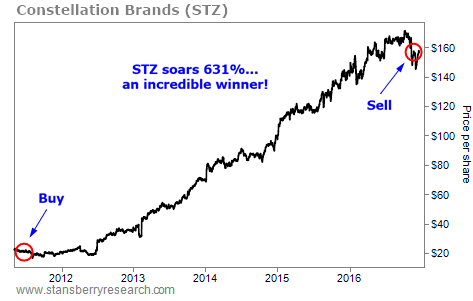 The good news is, you don’t need this kind of iron conviction to avoid selling too soon. All you need is a simple stop loss.

We never know when a stock will become a huge winner. But if you sell a stock every time you hit a certain threshold, you’re limiting your gains. You’ll never know the joy of sitting on a 631% winner, like Dan’s Extreme Value subscribers did. And you’ll remain part of the group of “average” investors who chronically underperform the market averages.