Netflix Inc. (Nasdaq: NFLX), a stock we talk about frequently, recently completed a $1.4 billion euro-denominated bond sale. Not surprisingly, millions of investors think this is a good move because it’s money that the company will (presumably) put towards new content development.

[ad#Google Adsense 336×280-IA]I’m not so sure that’s the case. More to the point, I believe savvy investors would be wise to put Netflix on a very short leash at the moment for three reasons I’d like to talk about today.

The devil, as they say, really is in the details.

Here’s why, and what to do if you own Netflix stock.

Netflix announced last month that it would be raising $1.1 billion in a euro-denominated bond sale as a means of funding new content and growth.

Almost immediately, the company raised the tally to $1.4 billion because demand was so high.

That’s not surprising considering that the notes would be sold to “qualified institutional buyers” outside America who are presumably just as income-starved as their U.S. peers, and that the paper carries a 3.625% coupon.

Millions of investors think this is a great idea based on nothing more complicated than the fact that the company’s stock has jumped 22% year to date and 74% over the past year, versus only 4.77% and 15.9%, respectively, from the S&P 500 over the same time period.

To their way of thinking, the company is going to use the proceeds to create “original content” which, in Wall Street speak, means incredibly valuable proprietary programming.

The single biggest risk you have if you own Netflix stock is letting a fabulous winner turn into a portfolio-cratering loser.

I suggest you move Netflix to a “Hold” immediately.

At the same time, implement a very tight trailing stop using the latest support and resistance channels as your guide. Seems to me that $145-$150 is about right based on recent trading activity.

The goal here is twofold.

First, you never want to try to time the markets, simply because that never ends well. Setting your stops ahead of time using a support and resistance channel gives you the flexibility to stay in the game and rack up still more profits if traders operating on the “greater fool” theory take prices higher in the months ahead. 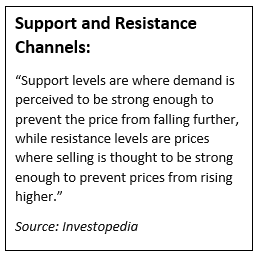 And, second, you’re limiting the risks associated with a rollover if and when those very same traders hit the “Sell” button. That means you have peace of mind and discipline in place at a time when others will inevitably panic.

Now, I’m asked all the time if you can also play situations like this by purchasing put options or spreads.

Definitely. However, you’ve got to be prepared with an entirely different set of risk management calculus if you do. That’s because I think there’s a good chance star-struck investors push Netflix higher in the months ahead and that, in turn, will cause your options to lose money faster even though the stock is still profitable. (I’ll have more in future columns.)

At the end of the day, building Total Wealth doesn’t have to be complicated to really boost your profits. In fact, success often comes down to simple analysis of the obvious…

…which is usually what other investors overlook.