It’s amazing how straightforward building real and lasting wealth and passive income can be.

Society had me tricked for so long, having me believe that it was some kind of fairy tale reserved for the lucky and/or powerful few that kept all the secrets to themselves.

But there’s no secret at all.

However, there’s some hard work involved, which is quite possibly enough to turn away a lot of people.

[ad#Google Adsense 336×280-IA]Nonetheless, if you’re willing to work hard, live below your means, and invest your capital intelligently, financial freedom can be yours.

But I’m not keeping any secrets to myself.

I’ve shared my blueprint for early retirement with the world.

As you can probably guess by now, there’s no secret to keep because there’s nothing mysterious about the process.

I worked 12-hour days for years on end. I made some sacrifices. I lived very frugally.

And perhaps most important, I invested my excess capital into high-quality dividend growth stocks like those you’ll find on David Fish’s illustrious Dividend Champions, Contenders, and Challengers list.

The end result is a six-figure portfolio that generates more than $11,000 in annual dividend income.

And that’s what today’s article is all about.

I’m going to reveal a high-quality dividend growth stock (sourced from Mr. Fish’s list) that appears to be undervalued.

After all, buying a stock is much like buying anything else in life: you should aim to get a good deal on your purchase.

The price of a stock only tells you how much it costs.

The value of a stock will tell you how much it’s actually worth.

Without knowing value, it’s nigh impossible to know whether or not the price is appropriate.

And undervaluation – a stock that’s priced below its fair value – usually presents such an attractive opportunity to the long-term investor because of numerous benefits.

Now, this is all relative to what the same stock would offer if it were otherwise fairly valued or overvalued.

The higher yield is generally present, all else equal, because price and yield are inversely correlated.

The further the price drops (as a stock becomes more undervalued), the higher the yield will be, all else equal.

That higher yield has a positive impact on total return, as a stock’s dividends/distributions is one of two components of total return.

Capital gain is the other component, and capital gain is also given a boost itself via the upside that exists between the lower price paid and the higher intrinsic value of a stock.

If the broader market realizes the disconnect between price and value – the mispricing – the price will then rise, meeting fair value.

That convergence is upside.

And that’s on top of whatever normal upside is available as a high-quality business becomes worth more over time.

All of this mispricing also tends to reduce one’s risk, as one is simply risking less capital on a per-share basis.

Paying less allows one to build a margin of safety, whereby there’s a buffer against losses.

Of course, undervaluation is what most (or all) long-term investors are chasing.

As such, it would seem like it would be terribly difficult (or impossible) to determine what a dividend growth stock is approximately worth.

Well, it’s actually not that difficult at all.

In fact, there’s a resource available right here on the site that has been designed to specifically estimate the intrinsic value of almost any dividend growth stock out there.

Put together by fellow contributor Dave Van Knapp, as part of his overarching series of lessons on dividend growth investing, it’s a fantastic tool that can help any investor approximate the value of a dividend growth stock.

So let’s put it all together by taking a look at a high-quality dividend growth stock that right now appears to be priced less than its intrinsic value.

AbbVie Inc. (ABBV) is a global pharmaceutical company with a particular focus on immunology and oncology.

While a massive global pharmaceutical company, AbbVie is heavily concentrated on one particular drug: Humira.

Humira is a drug that’s primarily used to treat rheumatoid arthritis, and it accounts for more than half of AbbVie’s sales.

While this is a key risk, AbbVie has a strong pipeline of drugs in immunology drugs, and the company is making gains in blood cancers.

In addition, Humira isn’t going anywhere due to its popularity and efficacy.

While the business continues to grow and diversify itself, shareholders are getting paid a handsome and growing dividend.

While that might seem like a short track record to base an investment thesis off of, AbbVie was split off from Abbott Laboratories (ABT) in 2013, which, as a legacy company, had a multi-decade run of growing dividends.

As such, there’s a deeper dedication to growing dividends than what might appear on the surface.

After accounting for the spin-off, the dividend growth track record is as lengthy as it can possibly be.

And the growth is pretty impressive, with the stock registering a three-year dividend growth rate of 12.5%.

The payout ratio is modestly elevated, at 66.3%, but the dividend still has plenty of flexibility, as I’ll soon show.

What’s perhaps most impressive of all about the dividend is the yield.

So you’re looking at a yield near 4%, along with double-digit dividend growth. That’s a tough ask in this market.

Definitely a lot to like about the dividend here, but we must really get a look at what the underlying business is doing (especially in terms of profit growth) in order to determine what kind of baseline expectation to set for future dividend growth moving forward.

In that respect, we’ll see what AbbVie’s top line and bottom line has done since it became an independent company, and we’ll compare that to a near-term forecast for profit growth.

Taken together, this should give us a pretty good idea as to what kind of earnings power AbbVie really has.

Looking out over the next three years, S&P Capital IQ believes AbbVie will compound its EPS at an annual rate of 14%, which wouldn’t be too far off from what AbbVie has done since it went independent.

Indeed, AbbVie’s midpoint EPS guidance for FY 2017 would represent a 27% increase over EPS for FY 2016. And AbbVie recently reported Q1 2017 results that included a 28% YOY increase in EPS, so they’re right on track.

Said another way, AbbVie is growing at a monstrous rate that’s actually accelerating.

I mentioned earlier that the dividend still has a lot of flexibility. Well, that’s because the company is growing so quickly. So even with the elevated payout ratio, the dividend can still grow at a pretty appealing rate.

One area of the company that could probably improve a little bit is the balance sheet, though it looks worse on paper than it really is.

But that’s largely due to low common equity, not extremely high debt.

For perspective, the long-term debt represents less than 35% of the company’s market cap. In addition, the interest coverage ratio is more than acceptable, at over 8.

Profitability for the company is robust.

Obviously, ROE is elevated due to the debt. But the margin is strong.

The company is growing well into the double digits, which supports double-digit dividend growth. And then you get that yield near 4% on top of that.

The key risk is their reliance on Humira.

But if you can get the right price on the stock, it seems like an excellent long-term investment candidate to me.

Is it the right price?

The stock is trading hands for a P/E ratio of 17.35 right now. That’s below the broader market. Yet the company is growing faster than average. And you get an above-average yield, too.

I factored in a 10% discount rate and a long-term dividend growth rate of 6.5%.

However, I always believe one should model in a margin of safety with the dividend growth rate, which I believe I accomplished here.

It appears to me that this stock is at least modestly undervalued, perhaps significantly so. But I always like to compare my analysis with what professional analysts who follow the company have come up with, as it provides even more value and perspective to you readers.

Morningstar rates ABBV as a 4-star stock, with a fair value estimate of $73.00.

I was relatively in line with Morningstar. S&P Capital IQ is arguably aggressive with their number. Nonetheless, averaging these three conclusions gives us a final valuation of $86.17, which would indicate the stock is potentially 29% undervalued. And that’s even after the company recently crushed Q1 results, sending the stock higher. 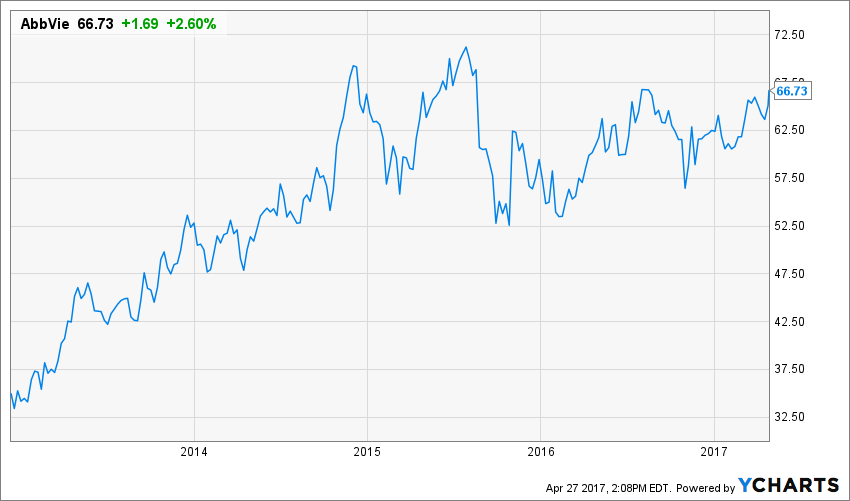 Bottom line: AbbVie Inc. (ABBV) is a high-quality and growing firm with a blockbuster drug in its arsenal. It’s growing well above average with an above-average yield, yet the valuation looks to be well below average. That has led to what looks like 29% upside, all while investors get paid a ~4% yield to wait. But that’s only if you own the stock, which means you might not want to wait to buy it.