It’s easy to get caught up in the hype surrounding medical breakthroughs.

So far this year, biotech companies have outperformed the broader market.

The end of January is typically strong because, as Chief Income Strategist Marc Lichtenfeld explains, “Biotech stocks usually take a breather, sometimes for the rest of the year until they start moving in anticipation of the J.P. Morgan Healthcare Conference – the first big one of the year – in early January.”

[ad#Google Adsense 336×280-IA]This is where many investors first learn about new biotech companies.

And they end up putting money in the most promising ones – spiking the sector.

This spike in biotech at the end of January, especially this year, also comes from the promise of personalized gene therapies.

Whereas current therapies for chronic diseases may need lifelong treatment, gene therapies could cure them in a single sitting.

It’s also good for your portfolio.

I’ll reveal the big players in the field. But first, let’s talk about this gene-editing tool.

It was discovered in 2013 and has been disrupting the biotech sector ever since.

There’s a dispute over who has the rights to the technology.

Needless to say, the patent is valuable.

It was developed in bacteria by the Doudna lab at University of California at Berkeley. It was later developed for use in animals by the Zhang lab at the Broad Institute.

The patent for use in humans will likely go to the Zhang lab group.

So the companies founded from the Broad Institute will have strong patent claims and licensing power for the technology.

Editas Medicine Inc. (Nasdaq: EDIT) was founded out of the Broad Institute and has access to many of its patents.

This case, and its recent partnership with Allergan, is positioning Editas for success.

But as is common for the biotech sector, its news has also affected the two other companies researching with CRISPR: Intellia Therapeutics Inc. (Nasdaq: NTLA) and CRISPR Therapeutics Ltd. (Nasdaq: CRSP). While neither are affiliated with the Broad Institute, they are two of the other leading genome-editing companies.

The patent news surrounding CRISPR technology in early February caused the stocks of the three companies to move.

Editas jumped first because of the patent and partnership news. Intellia and CRISPR Therapeutics followed. 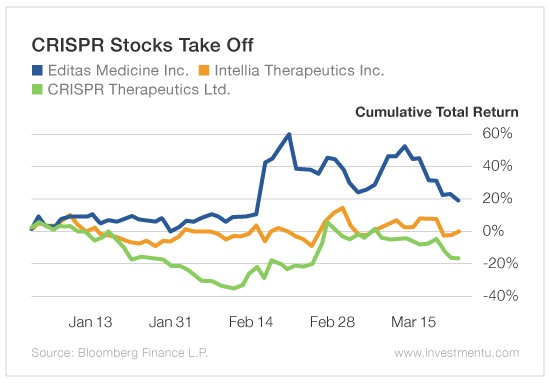 This trend, as Marc explains, occurs because “more than any other sector, biotech trades based on future potential.

“Remember, many of these companies are not profitable and don’t even have a product to sell. So investors buy and sell the stock based purely on how much potential revenue and profit a company will generate many years in the future.

“Those forecasts change dramatically with each new data point from the companies’ (and their competitors’) clinical trials.”

CRISPR therapies could cure many genetic diseases. Cancer therapies that involve using CRISPR to make the immune system cure cancer are among the most developed applications of the technology.

Editas, Intellia and CRISPR Therapeutics are all working toward developing these therapies.

Biotech investing is generally risky. These companies are often founded on scientific discoveries. They face lengthy and expensive approval processes.

Many startup pharmaceutical companies fail completely because of the rigor and cost of the FDA approval process.

Editas’ application of CRISPR to a rare genetic blindness is one of the most developed therapies.

As Marc explained at the Investment U Conference in March, “This technology is so early stage that it’s too early to determine who the winners are going to be. They haven’t even tested it in humans yet. If you want to invest in this technology, I recommend buying all three CRISPR stocks – Editas, Intellia Therapeutics and CRISPR Therapeutics.”

These next few months will be critical for gene editing as these three companies race to clinical trials.

They have the potential to pay off big time – in health and wealth.