The market has now posted two straight weeks of declines after a strong first quarter which saw the NASDAQ post an almost 10% rise for the first three months of the year. The S&P 500 also delivered a more than respectable 5.5% gain.

[ad#Google Adsense 336×280-IA]However, that index is now some three percent from recent all-time highs as worries mount about the market as well as underlying economic growth.

The Atlanta Fed’s GDPNow, a widely-followed forecasting group, now thinks that first quarter GDP growth will come in at just a half a percent.

These forecasters were predicting three percent economic growth for the first quarter of 2017 when the year opened. Slow economic starts to the year have become the trend since the ‘Great Recession’ hit the markets in 2008/2009.

At least the year will not open with downright economic contractions in the first quarter like in 2011 and 2014.

Investors and the markets are currently sorting through conflicting data points. On one hand, business confidence has spiked since the election and small business hiring has picked up as well. Consumer confidence in February posted its highest reading since December of 2000, which was just before the internet bubble collapsed.

However, this burst of confidence has not funneled its way into increasing consumer spending as of yet. Retail and restaurant spending is anemic and the ‘core’ portion of the consumer spending index just posted outright deflation for the first month since January of 2010.

Looking on the bright side, first quarter profit growth within the S&P 500 is forecast to come in at 10% on a year-over-year basis as we kick off first quarter earnings season. If this consensus is right, this would be the best quarterly earnings growth since 2011.

China also seems to be on the mend and the latest GDP reading from the Middle Kingdom exceeded expectations. In addition, domestic US second quarter GDP is currently predicted to be above the three percent level. This would be a nice acceleration from what first quarter GDP is supposed to deliver when those numbers come late in April.

I believe the market is at an inflection point and will be until we confirm faster economic growth. Progress in congress for significant tax and regulatory reforms and an increase in infrastructure spending could also buoy growth forecasts and be welcomed by investors. However, it feels like we have a fully valued market at current levels and stock picking will be the key to outperforming the overall market in the months ahead.

As I have been throughout 2017, I am heavily underweight the financial sector. Investors bid banks and insurers up directly after the election on the hopes for higher interest rates, significant regulatory reforms and increased loan growth. None of these hopes have materialized in a substantial way to date.

Loan growth is paltry and yields on the ten-year treasury have fallen from a peak of just over 2.6% earlier this year to just north of 2.2% as forecasts for first quarter GDP growth have fallen.

The failure to repeal and replace the Affordable Care Act to date has also lowered the chances of significant regulatory and tax reform in the months ahead.

Major banks like Bank of America (NYSE: BAC) and J.P. Morgan (NYSE: JPM) have given back almost 10% of their post-election gains over the past month. 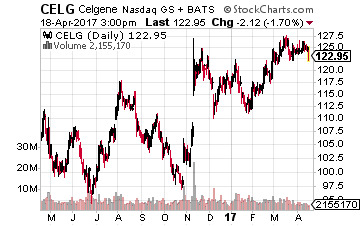 However, given the size of these stocks’ rallies since early November, they could still have farther to fall.

I used the first quarter rally in the markets to double the cash allocation in my own portfolio to roughly 20%. I think sector rotation within the market is likely and a decent sized general pullback in equities cannot be discounted given we are still near all-time highs in the market. 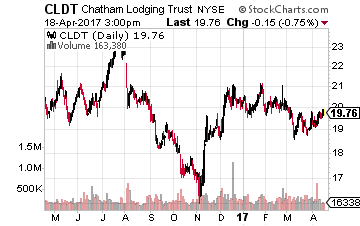 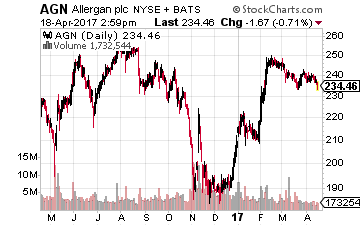 I plan to put that cash to work on any dip incrementally. One area of the market that I think is already reasonably valued are drug and pharma giants that can power revenue and earnings growth without relying on price hikes.

Allergan is using the $40 billion it received from the sale of its generic drug business last year to bolster its faster growing branded drug business by making strategic acquisitions.

Celgene has the most visible growth path of any major biotech company I know over the next three to five years. 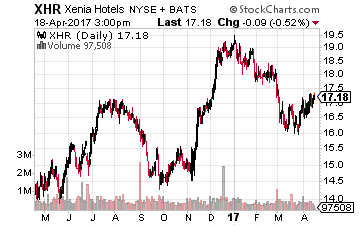 This growth is led by its blockbuster blood cancer drug Revlimid which continues to get approved for new indications.

I also think some REITs look interesting here as this sector fell hard on the rise of interest rates since the election but have not clawed back much of those losses despite the recent fall in rates.

I would avoid highly levered REITS as well as anything connected to retail as that sector continues to get “Amazoned”.

Both entities are well-managed, have solid balance sheets, are reasonably valued and pay over six percent dividend payouts.

That yield might be more than the market returns from here to year end unless economic growth picks up markedly in the quarters ahead.