Real estate investment trusts (REITs) have essentially one job to do for their investors – pay reliable dividends.

[ad#Google Adsense 336×280-IA]Many do, but when firms find their payouts in jeopardy things get ugly in a hurry. Which is why you need to avoid, or sell, the five ticking time bombs we’re going to discuss today.

Dividend cuts don’t just “happen.” When a REIT slashes or suspends its dividend, it’s rarely a surprise – and rarely an isolated incident. 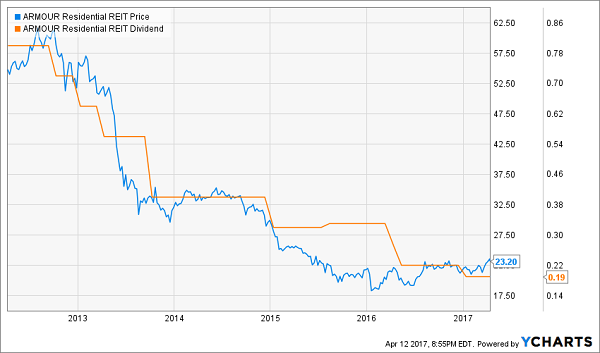 Sure, the current yield for Armour always looks good at 10% or higher. Problem is, its payout can’t be trusted. And neither can these five unsustainable dividends.

On its face, Global Medical REIT (GMRE) would look like a no-brainer buy – after all, it’s a nearly 9% yielder that plays in the ever-growing megatrend of healthcare?

But GMRE is an odd bird with some serious problems.

First off, Global Medical REIT comes from strange beginnings. The company started in 2011 as an internet dating site reviewer called Scoop Media, then was bought out in 2013 by Hong Kong real estate company ZH International Holdings. The company then turned Scoop Media into Global Medical REIT – a Maryland corporation that buys healthcare facilities, then leases them out under long-term triple-net leases – which then went public in June 2016.

While the company’s revenues have exploded over the past year, its net losses have ballooned, too, from $1.61 million to $6.35 million. That filtered down to funds from operations (FFO) – an important measure of operational results that’s also useful in determining the integrity of the dividend – of negative 3.98 million in 2016, more than four times worse than its 2015 number! Adjusted FFO of negative 3 cents per share is troubling, considering GMRE pays out 20 cents per share per quarter in dividends.

This stock is untested and off to a rough operational start, which is why it’s off 10% since its IPO – twice as bad as the broader REIT market. 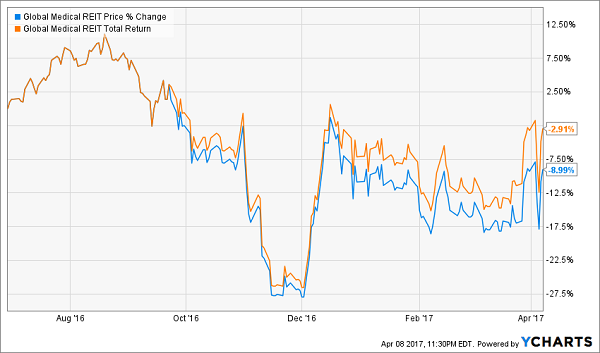 AGNC Investment Corp. (AGNC) is an established player among mortgage real estate investment trusts (mREITs), but this high-yield name has struggled over the past few years, and its dividend looks downright wobbly at the moment.

AGNC primarily invests in agency mortgage-backed securities – which are issued by government-sponsored groups such as Fannie Mae or Freddie Mac. The company finances these typically through short-term secured loans referred to as “repurchase agreements.” And it does so at quite a bit of leverage – in fact, as of the end of 2016, AGNC boasted a tangible net book value “at risk” leverage ratio of 7.7x, much higher than many of its competitors.

That’s up from 6.8x at the end 2015, cranked up in part to help finance the purchase of its external manager, American Capital Mortgage Management, which closed last July. Worse, the company also reduced its monthly dividend from 20 cents to 18 cents so it could better afford the $562 million deal … and that’s after reducing the dividend from 22 cents to 20 cents in 2015!

AGNC is struggling to find financial footing, and its dividend track record is far from stellar. Avoid this at all costs – there are better ways to get high yield.

AGNC Investment Corp. (AGNC): This Is NOT What a Dividend Chart Should Look Like! 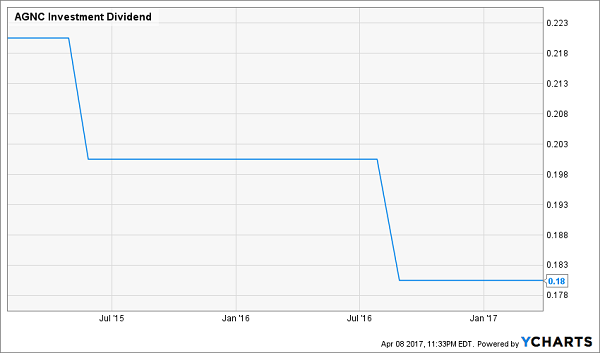 Exchange-traded funds (ETFs) can provide a number of benefits to investors, not the least of which is cheap, simple portfolio diversification. The iShares Mortgage Real Estate capped ETF (REM), however, is one of the best examples of when that diversification can come back to bite you in the rear.

The REM is an ETF that holds a number of mREITs, and it carries a couple of gems, including Blackstone Mortgage Trust REIT (BXMT) and Apollo Commercial Real Estate Finance (ARI). However, combined they make up just about 8% of the fund’s weight. Drowning them out are Annaly Capital Management (NLY) – which I consider to be one of the most dangerous dividends of 2017 – and the aforementioned AGNC. Together, those two stocks account for more than a quarter of the fund’s performance! You’re better off picking a couple of individual winners and not letting your returns get weighed down by a crowd of losers. 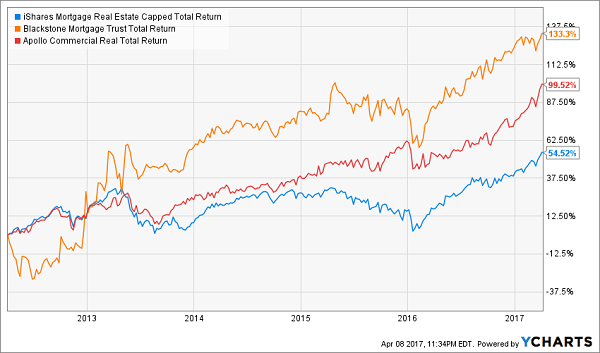 Live Off Dividends Forever With This “Ultimate” Retirement Portfolio [sponsor]

Each of these dividend duds has the potential to ruin your retirement. Sure, they yield 8%, 9%, 10% … at the moment. But how long will that yield hold up before financial troubles take the dividend down to 7%, 6% or lower? And what good is a big yield if capital losses are cutting your returns in half?

You need substantial dividends that are built to last decades if you want to get through retirement without ever touching your nest egg – and that’s exactly the kind of picks I’ve complied to build my 8%-yielding “No Withdrawal” retirement portfolio!

A lot of pundits recommend that retirement investors pour their money into blue chips like Procter & Gamble or Coca-Cola – companies that typically yield 3%, maybe 4% if you’re lucky. But if you do the math, you’ll quickly realize that strategy will leave you far short of the goal. That’s because 3% to 4% returns on a nest egg of half a million dollars will only generate $20,000 in annual income from dividends at the high end!

You’ve worked way too hard in life to get so little out of retirement.

But my “No Withdrawal” portfolio ensures that you won’t have to settle during the most important years of your life. I’ve put together an all-star portfolio that allows you to collect an 8% yield, while growing your nest egg – an important aspect of retirement investing that most other strategies leave out.

I’ve spent most of the past few months digging into the high-dividend world, and I’ve had to weed out several yield traps that looked great on their surface, but potentially disastrous at a closer look. The result is an “ultimate” dividend portfolio that provides you with …

This all-star cluster of stocks features the very best of several high-income assets, from preferred stocks to REITs to closed-end funds and more, that combine for a yield of more than 8%.

Don’t scrape by on meager blue-chip returns and Social Security checks. You’ve worked too hard to settle when it matters most. Instead, invest intelligently and collect big, dependable dividend checks that will let you see the world and live in comfort for the rest of your post-career life.

Let me show you the path to the retirement you deserve. Click here and I’ll provide you with THREE special reports that show you how to build this “No Withdrawal” portfolio. You’ll get the names, tickers, buy prices and full analysis of their wealth-building potential – and it’s absolutely FREE!