Sentiment on the biotech sector early in 2017 sure has improved. The main biotech indices gained approximately 10% in the month of February. The sector has added somewhat to those gains so far in March but continues to be unable to break through stubborn upward resistance levels.

Hopefully, a few more M&A transactions over the next few weeks puts the sector over the top and we can start the next leg of the rally which could take us up another 10% to 15% until we hit another established resistance level. If that does happen, I expect for these small biotechs that already have had good starts to the year to post further gains. 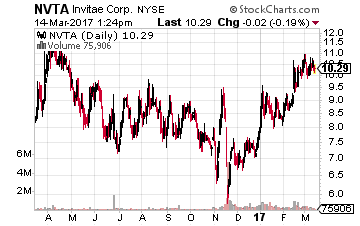 Genetic testing firm Invitae (NASDAQ: NVTA) is up some 50% since it was included in the model 20-stock portfolio over at the Growth Stock Advisor in late November.

However, the stock still sells for approximately half of where it came public at in early 2015.

This is shaping up to be the classic “Busted IPO” story.

This is an area I have made some of my most profitable investments during my 30 years as an investor. It is also why I never buy a small cap concern until it has been public at least 12-18 months.

[ad#Google Adsense 336×280-IA]Once the analyst hyperbole has passed and insider lock ups have expired, you often can get the same company further down its developmental or growth path for 30 to 50 cents on the dollar.

Something your broker will rarely tell you.

There is a lot to like about Invitae going forward.

Invitae is still losing money but is seeing huge growth in revenues – up 190% year-over-year basis in the fourth quarter.

The stock also gives an investor exposure to the fast-growing genetic testing market which should grow from $3 billion to $4 billion on an annual basis currently to $8 billion to $10 billion over the next 5-6 years. Given those growth prospects, it would not be shocking should this small company (less than $450 million market capitalization) become a strategic acquisition target for a larger player wanting to expand into this space. 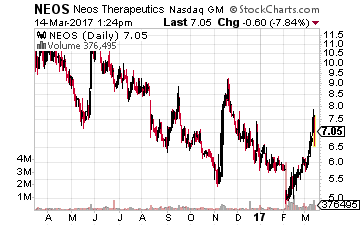 Next up is Neos Therapeutics (NASDAQ: NEOS) which is up some 25% since it was first recommended in these pages in late January but even further upside seems likely given its current momentum.

This $150 million market cap company is largely targeting the ADHD space which is roughly a $9 billion annual market.

Its first product on the market is a compound called Adzenys. This once-a-day FDA-approved product was launched in the second quarter of last year and is seeing impressive script growth in the initial phase of its launch.

Another product called Cotempla should be approved in early summer and be on the market before the end of this year. With this launch, the company will have complete coverage of the stimulant part of ADHD space. The company also sells generic Tussionex (a cough suppressant) that does around $6 million of annual revenues.

While not yet profitable, the company should see explosive growth in coming years. Even a two percent share of the ADHD market would make the stock extremely cheap at current levels. 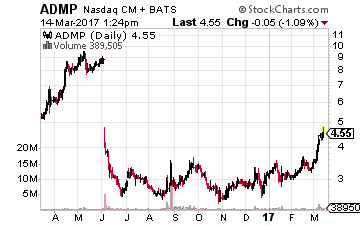 Finally, we have a new name to profile in these pages, Adamis Pharmaceuticals (NASDAQ: ADMP) which currently sells for just under $4.50 a share and has a market capitalization of just south of $100 million.

First, the company bought a contract manufacturer just less than a year ago for $8 million in stock and another $5 million in assumed debt.

This was a good deal as that part of the business had a $20 million annual revenue run rate and is already cash flow positive. 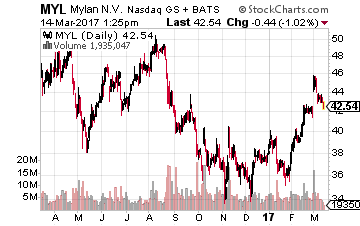 This is designed as an alternative to Mylan’s (NYSE:MYL) EpiPen which spent most of 2016 dealing with a pricing fiasco that grabbed national headlines.

This is an approximate $1.1 billion market and competitors to the EpiPen have made some recent headway and now account for some 30% of the market.

The stock sold for north of $10.00 a share before its New Drug Application (NDA) was hit with a complete response letter (CRL) from the FDA last summer. Adamis has addressed the manufacturing concerns within that request and resubmitted the NDA in mid-January. I expect the application to be approved this time around and this product to garner $50 million to $100 million in annual sales over time. Not a big part of the overall market, but certainly significant to a company the size of Adamis.

The last part of Adamis’ business is a couple of mid-stage inhalers the company is currently developing. The market is assigning no value to this piece of the business at all, so this is just a “free call option” that investors are picking up for nothing right now.

Sponsored Link: Recently my long term biotech readers have been profiting nicely from my Biotech Gems recommendations. Biotech Gems is yielding solid high double digit and even triple digit winners to my readers. For more on how to get outsize returns from biotech stocks with Biotech Gems click here.