Although we’ve just completed what has been a strong earnings season overall, one very popular company did not share in the experience. The company – Starbucks (NASDAQ: SBUX) – actually reported worse than expected results and lowered revenue guidance. 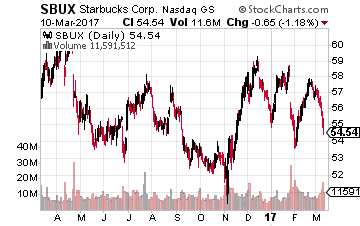 It was obviously a disappointment to investors, who have become mostly used to strong growth from the coffee giant.

Keep in mind, SBUX had been one of the better performing major stocks over the past few years.

But 2016 was a pretty stagnant year for the coffee retailer – until earnings hit this year.

[ad#Google Adsense 336×280-IA]As you can see, the share price suffered a roughly 10% drop after earnings (end of January).

The stock immediately recovered afterwards due to the strength of the bull market, but has since given up much of the gains.

From a purely technical standpoint, things don’t look so good for SBUX.

There are a handful of variables that have been working against the company over the past several months.

First off, the popularity of the company’s mobile ordering has actually been more of detriment than a boon. That’s because mobile orders are given priority by baristas, but are served in the same area of the store as all other drinks. The result were longer waits and more confusion among customers. 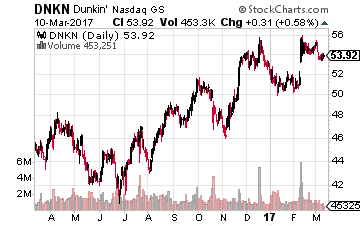 What’s more, the coffee chain has been experiencing more intense competition from competitors, who have been pricing their coffee drinks lower in order to draw customers to them.

Starbucks historically hasn’t had to worry too much about prices because of customer loyalty.

But, low prices and wider offerings from places like Dunkin Brands (NASDAQ: DNKN) are starting to take their toll.

Finally, there’s the issue of weather. The much warmer than expected winter has hurt sales of hot drinks, typically a big draw during the cold weather months. It seems even the climate is conspiring against SBUX lately!

However, SBUX has something many other companies would die for, a massive and highly loyal customer base. Not to mention, the company’s management has proven to be shrewd and innovative. I’ve learned over the years that it’s a never good idea to underestimate the company.

While management can’t control the weather, they certainly should be able to fix the mobile ordering issues. And, they certainly can lower prices or offer cheaper alternatives to current drinks if they choose to compete on price. As such, I believe we’re looking at yet another buying opportunity.

As always, with any sort of short to medium-term directional strategy, I highly recommend using options instead of stock.

Here’s what I would do with SBUX…

First off, with the stock roughly around $55, it looks like the share price may be near a bottom. If you are a believer in technical indicators, there should be very strong support around the $54 level. On the flip side, the stock looks like it could get back to $59 on a reversal.

This scenario sets up perfectly for a call spread. Remember, a call spread is when you purchase a call and sell a farther out call at the same time. The short call helps reduce the overall cost of the trade. And, since we don’t expect SBUX to go higher than $59 anytime soon, it makes an ideal ceiling at which to place our short strike.

For this trade, we need to go out to June expiration in order to give time for management to make any changes to its mobile ordering process. Or at the very least, it will give us time for the weather variable to no longer be a factor.

Max profit on this trade is $3.30 if the stock goes to $60 or higher by expiration. Max profit is calculated by taking the width of the spread ($5) and subtracting the upfront premium costs ($1.70). Of course, that means the max loss is the premium cost or $1.70.

For three months of control, you can earn nearly double what you would pay for the spread. Plus, you start making money if the stock only moves about 3% higher than where it’s been the last couple days. You’ll easily generate enough cash to pay for your morning coffee, and quite a bit more.