The last time we had such a strong dollar, the musical Chicago won an Oscar. iPods were a hot new technology. And President George W. Bush was getting ready to run for re-election.

After the Fed announced an interest rate hike last Wednesday, the dollar climbed 1% against the euro and almost 1.5% against the yen. 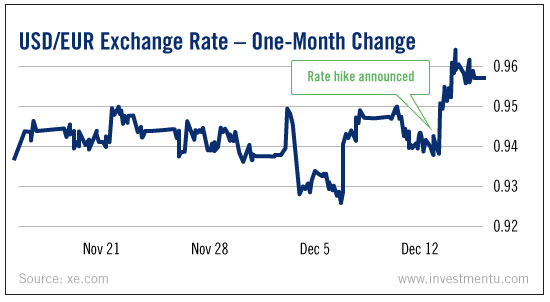 [ad#Google Adsense 336×280-IA]The term “strong dollar” has a patriotic sound to it. But that’s a bit misleading. Some American assets and industries do benefit from an appreciating dollar. But many others suffer from it.

Let’s take a look at the biggest winners and losers of a strong currency.

A rising dollar makes imports cheaper in the United States. It brings down the overhead costs of firms that sell foreign-made goods.

Thus, the best-performing stocks under a strong dollar will tend to be importers whose sales come mainly from within the U.S.

Low exposure to foreign retail markets is also a plus.

Small cap stocks tend to fit the bill. Due to their size, they generally don’t have big international presences. And they often can’t afford to manufacture domestically. So a strong dollar saves them money in their supply chains.

As you can see, the iShares Russell 2000 ETF (NYSE: IWM) has already recovered from its post-hike sell-off. In fact, it’s climbing higher. 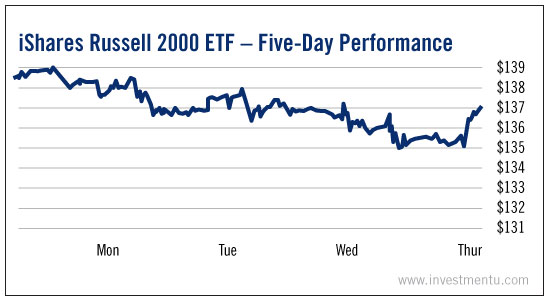 While a strong dollar makes imports cheaper, it also makes American exports pricier and less competitive around the world. This is a big problem for American manufacturing firms. It also could hurt revenue for companies that do a lot of sales outside the U.S.

This seesaw relationship between currency price and export volume is an important concept in economics. It’s part of the reason why the Fed kept its quantitative easing program so active for so long. Its bond purchases grew the money supply, devaluing the dollar. The aim was to improve U.S. export competitiveness and create manufacturing jobs.

A weak dollar hasn’t exactly done that. Manufacturing output has gone up since the recession. But factory jobs haven’t grown as much, thanks partly to those pesky robots.

Unfortunately, a strong dollar may reverse some of those gains in manufacturing output. That’ll be bad for factory workers and the companies that employ them.

You can already see how the rise of the dollar is hurting American heavy industry. The Industrial Select Sector SPDR ETF (NYSE: XLI) took a dive last Wednesday and has recovered to a noticeably lower price level. 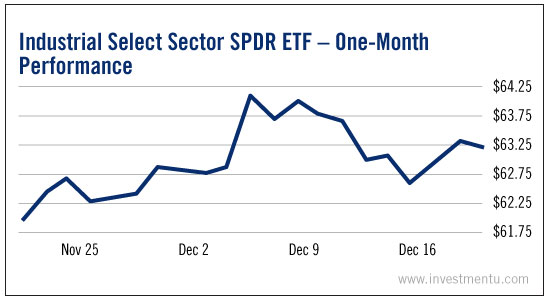 To a less-informed observer, a strong dollar sounds like something the U.S. would want. But as we’ve just explained, the impact of currency price is a bit more complicated than that.

There are certainly upsides to a rising currency. Imports get cheaper, and importer margins grow – just in time for the holidays. But the inverse is also true. American manufacturers and exporters will have a harder time selling their wares to the world.

Wise investors will prepare their portfolios for this shift in our economy. As our new government sets about trying to make America great again, we’ll have to deal with the side effects of making the dollar greater as well.