Fed Chair Janet Yellen has been a real headache for financial journalists. She’s been notoriously quiet and cryptic on the issue of interest rates. And that’s kept investors and commentators alike on the edge of our seats.

The question nearest and dearest to our hearts: Will the Zero Economy continue trudging forward, leaving unprecedented financial chaos in its wake?

[ad#Google Adsense 336×280-IA]By certain measures, we are fully recovered from the Great Recession.

The unemployment rate, for example, implies that we have been for a while now.

But other measures, like inflation, seem to indicate that it’s too early to raise interest rates from rock-bottom crisis levels.

Yellen’s solution, up until now, was to keep rates low and flip-flop on the prospect of raising them.

There was a strategy to that approach… but it also had some serious consequences.

On Wednesday afternoon, however, the Fed chair finally announced that the Zero Economy may be on its way out. Our central bank will raise the policy rate by 0.25%.

Let’s look at the immediate effects of the long-awaited rate hike. We’ll also discuss what you should expect to see going forward.

Strong Dollar, Weak Stocks
After Janet Yellen spoke, the market reacted… exactly like everyone thought it would. (It’s nice to have some predictability in the Fed-watching game.)

On Wednesday afternoon, the dollar surged almost 2% against safe-haven currencies like the Japanese yen. That might not sound like much, but it’s a big deal for the world’s reserve currency. 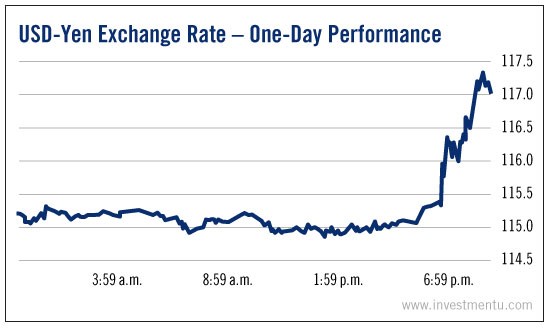 The reasons for the dollar rally are pretty obvious. Higher interest rates mean that investors get a better return in the U.S. That caused capital inflows that raised the value of our currency.

A stronger dollar is good news in some ways. It could stave off the price inflation that the Fed chair cited as a reason to raise rates. But, like everything else in economics, it’s a double-edged sword. When the dollar increases, U.S. exports get pricier and thus less competitive around the world. It could have a negative effect on manufacturers.

And so could the post-hike stock market rout. The S&P 500 sank about 1% after the announcement, as we said it would. 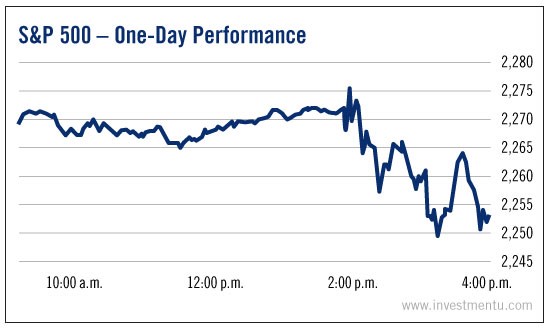 It’s important not to panic too much about this. A market correction is defined as a drop of 5% or more in major indexes. And not every market correction causes a prolonged downturn. This isn’t an excuse to freak out and sell everything.

In fact, as we write, the S&P is within a few basis points of reclaiming Wednesday’s loss.

But what should you do going forward?

What to Watch For
The Fed chair’s decision is justified by the current strength of the economy, so a recession is not a major risk here. But some investments will be hit harder than others.

As yields rise, bonds and dividend stocks will likely sell off further. New government debt notes will be more profitable than old ones, and they’ll be safer than dividend stocks. Debt-laden equities, like big banks and biotech firms, may also slump for a few more days. Rising interest rates increase the cost of corporate borrowing.

However, some other assets should recover quickly from Wednesday’s sell-off. Regional banks and precious metals both stand to gain from higher interest rates and a less enthusiastic stock market.

In general, the best investment advice right now is to keep calm and buy small dips in interest-rate-proof sectors like regional banking. 2016 has seen a series of dramatic events that threatened to kill the current bull market. Yet after Brexit, Trump and the Italian referendum, we’re still doing OK. And we will survive this inevitable rate hike, too.

Janet Yellen has been hard to read for Wall Street traders and journalists, and that’s undoubtedly intentional. Her cynical realpolitik has been a defining element of her time as Fed chair.

Yellen claims that she’s eyeing a series of additional rate hikes in the next few years. But she said the same back in the early 2010s, and Wednesday’s hike was the second one in the last 10 years. We’ll have to see what she does.

In the meantime, don’t panic, buy the dip and celebrate the (possible) end of this strange period in our economic history.