But I started to turn it around.

After all, these are some of the best businesses in the world.

They’re typically routinely increasingly profitable, year in and year out.

Better yet, they tend to spread the wealth by sharing that increasing profit with their business partners – the shareholders – via growing dividend payments, year in and year out.

These growing dividends serve as proof in the profit pudding, as I like to say. Don’t tell me how profitable you are, show me.

Moreover, the dividends themselves are a tangible source of passive income. You can reinvest those dividends and buy more shares (rolling your snowball) or you can use them to pay real-life bills.

If the dividends cover all of your bills, you’re essentially financially free.

That’s basically where I’m at. The Full-Time Fund I’ve built with my own blood, sweat, and tears generates enough passive income to cover my core personal expenses. And I’m only 34 years old.

Since I already shared where I started and how long ago I began this journey, you can see what’s possible in a short period of time. And you can also see why I’m such a fan of dividend growth stocks.

No, one wants to stick to buying the highest-quality dividend growth stocks at great prices.

Meanwhile, getting a stock at a great price involves buying when it’s undervalued.

Said another way, one should aim to buy a high-quality dividend growth stock when its price is substantially below its estimated intrinsic value.

Just like any other merchandise, stocks have a price tag.

And it’s the price that’s easy to find. Any stock quoting software will do the trick. You’ll know almost instantly how much money a share costs that way.

However, knowing what a share of a business is worth is quite another story.

Although valuing stocks used to be a bit difficult many years ago, before the Internet gave us so much easy access to resources and financial reports, it’s actually not all that hard these days.

For example, one could use fellow contributor Dave Van Knapp’s valuation guide to help them ascertain an estimate of what just about any dividend growth stock is worth. It’s almost criminally easy.

Once you know what a stock is worth, you can make a determination as to whether the price being asked is fair or not.

Knowing a stock is priced at $50 does you no good if you have no idea of what it’s worth. It’d be almost like me telling you that what’s in my hand is $20. How could you know if that thing is worth $20 or not?

And so we must go through the process of valuing stocks, much like we go through a process to value most everything else in life.

But there are great benefits for the little bit of work involved.

That’s relative to what would be available if the same stock were fairly valued or, worse yet, overvalued.
It’s easy to see how those benefits work.

Price and yield are inversely correlated; a lower price will equal a higher yield, all else equal.

This higher yield means more income both now and later.

But it also positively impacts your potential long-term total return, since yield is a major component of total return.

The other component, capital gain, is also positively impacted by virtue of the “upside” that exists between the lower price paid and the higher estimated intrinsic value.

While the stock market can get stocks very wrong in the short term, value matters over the long run. And if you’re constantly loading up on undervalued dividend growth stocks, you’re putting the odds on your side that all that value will eventually be realized, providing you capital gains in the process.

Paying $50 instead of $70 for a stock is inherently less risky; you’re simply paying less per share. And you might even be investing less absolute money (assuming you’re buying a static number of shares).

Either way, you’re introducing a margin of safety when you pay less.

Just in case you’re wrong with your assumptions, or in case the company goes a little haywire, you risked less capital. You risked less on a per-share basis, and even possibly in absolute terms. That gives you a little cushion.

With all this said, you can see why I’m always on the hunt for a high-quality dividend growth stock that appears to be undervalued.

Becton Dickinson and Co. (BDX) operates as a global medical technology company that develops, manufactures, and sells a variety of medical supplies and devices, laboratory equipment, and diagnostic products.

Becton Dickinson is one of my favorite businesses in the world. I only wish I would have bought it years ago.

And I can tell you that a big reason for that is because they supply the world with necessary and practically ubiquitous products.

In fact, Becton Dickinson takes advantage of the age-old “razor blade” business model, where a customer has to keep buying a new product whenever the old one (which has a short life cycle) wears out.

Well, instead of razor blades, Becton Dickinson deals in needles and syringes. You almost can’t visit a doctor without coming into contact with products supplied by Becton Dickinson.

And the recent $12 billion acquisition of CareFusion just adds to Becton Dickinson’s value proposition, as the company now offers medication management and healthcare safety solutions all together, in one integrated company.

You’ll sometimes see a company with almost five decades of dividend raises handing out pittance for dividend increases, due to growth slowing to a crawl.

However, that’s not the case here.

The most recent increase was also double digits, so I don’t see that slowing any time soon.

Based on adjusted earnings for FY 2016, the payout ratio is only sitting at 34%. So there’s plenty of room for future double-digit dividend increases.

The only real drawback here is the yield. The stock offers just a 1.78% yield, which is roughly in line with the stock’s five-year average. It’s just typically a low-yielding stock that currently has a low yield. Pretty status quo here.

Investors who need more current income might not find a lot of interest here; however, younger investors who perhaps don’t need a lot of yield will almost surely benefit from the compounding power of long-term dividend growth of this magnitude.

So we’ll start to build that future expectation by looking at what Becton Dickinson has done in regard to revenue and profit growth over the last decade, and then we’ll compare that to a near-term expectation moving forward.

That’s really strong stuff for a company that’s decades into its story.

So what happened here?

Well, EPS has taken a hit on a GAAP basis due to the aforementioned CareFusion acquisition, with related synergies and acquisition expenses affecting their reported EPS. On an adjusted basis, EPS came in at $8.59 for FY 2016, which would represent a CAGR of 10.53% for EPS over the last 10 years. That’s actually more reflective of what’s really going on.

Looking forward, S&P Capital IQ believes Becton Dickinson will compound its EPS at a 13% annual rate over the next three years, citing the potential of the merger and improving sales in emerging markets.

This forecast isn’t terribly far off from what Becton Dickinson has done over the last decade. So if the merger is even modestly successful, this doesn’t seem like a far-off prediction.

One aspect of the business that I’ve always admired is the rock-solid balance sheet. The company has historically sported a wonderful balance sheet with very little debt.

However, it’s taken a hit recently in order to fund the acquisition of CareFusion. The acquisition was largely paid in cash, so there was minimal dilution. However, that means that the balance sheet now has more debt.

The long-term debt/equity ratio is 1.38 and the interest coverage ratio is over 3.

These aren’t great metrics; however, I suspect that this will be improved dramatically over the next few years as the company pays down its debt and increases its EBIT.

Over the last five years, the firm has averaged net margin of 10.91% and return on equity of 18.61%. The company continues to guide for margin expansion (after the synergies take hold), so I suspect these numbers, too, will improve moving forward – and that’s off of a base that’s already really strong.

All in all, there’s really a lot to like about Becton Dickinson.

There’s no doubt that it’s a company in transition. But it looks like it’s a transition toward something bigger, brighter, and bolder. They’re turning into a real healthcare monster. And as the world grows older, richer, and bigger, that bodes well for them and their shareholders.

But is the stock a good deal right now? I’d argue that it looks to be at least slightly undervalued…

The P/E ratio (using adjusted EPS) is 19.09. That compares favorably to the five-year average P/E ratio of 20.4, although that average could have been somewhat impacted by the recent adjustments. But investors are right now paying less for the company’s cash flow than they have, on average, over the last five years. And with that cash flow likely to soar, that’s a pretty good spot to be in.

What, then, might this stock be worth? What’s a good estimate of its intrinsic value?

[ad#Google Adsense 336×280-IA]The DDM analysis is a tailored version of the discounted cash flow model analysis, as it simply substitutes dividends and dividend growth for cash flow and growth.

So I believe we’re looking at a stock that’s slightly undervalued, as many of the metrics I’ve looked at would indicate.

However, I’m actually on the more conservative side compared to what some professional analysts think about this stock and its value.

I always like to average these three different perspectives out, which should give us a pretty good idea as to what a stock might be worth. That averaged valuation is $181.55, which would indicate the stock is potentially 11% undervalued right now. 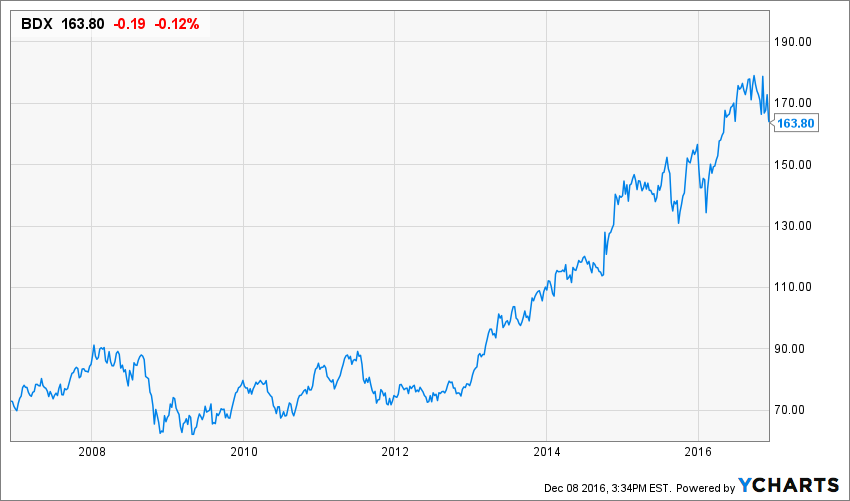 Bottom line: Becton Dickinson & Co. (BDX) is a high-quality company that has paid out growing dividends for more than four straight decades. And with a recent acquisition that’s still settling in, I think the odds are strong that the streak continues for many more years to come. With the potential for 11% upside on top of that, this is a very solid long-term dividend growth investment here.