There’s no need to worry yet.

But investors should start keeping an eye out for bears.

I wrote about this in September 2015, when it looked like stocks were rolling over into a bear market.

Plus, the S&P 500 monthly chart dropped below its 20-month EMA in September 2015 (and again in January of this year).

But it turned out to be a false alarm. Stocks recovered, and we avoided falling into a bear market.

While we had all three conditions in place for a bear market – and I was leaning bearish myself (no big surprise there) – we didn’t see any negative divergence on the moving average convergence divergence (MACD) indicator on the S&P 500 monthly chart.

So I figured the bear market indicators probably wouldn’t play out.

They didn’t. Stocks have gone on to hit new all-time highs.

Now, though – and this is really important – two of the three bear market conditions have triggered again…

Interest rates have pushed suddenly and sharply higher. The yield on the 30-year U.S. Treasury bond has risen from 2.15% to 3.15% in the past five months.

Margin debt hit a yearly high of $501 billion in September. It then dropped to $484 billion in October. So we may have seen the peak.

The long-term monthly chart of the S&P 500 remains above its 20-month EMA for the time being, so we haven’t met the third condition yet. But as you can see in the chart below, the MACD indicator is showing negative divergence… 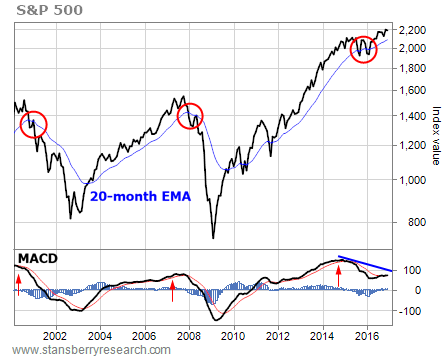 Somehow… I don’t think that will happen. December is typically a strong month for stocks.

But you should keep a close eye on this chart over the next few months. As the 20-month EMA rises, it will require less of a decline to trigger a bear market signal.

And with such strong negative divergence on the MACD indicator, odds are good that this will signal the end of the bull market and the beginning of a bear market.

There’s no need to do anything right now. But keep this possibility in the back of your mind.