Still think the Federal Reserve may not hike rates this month?

It’s time to change that view.

Traders betting through the Fed futures market now see the odds of rates staying where they are at a measly 1.4% after strong employment and consumer confidence numbers last week. 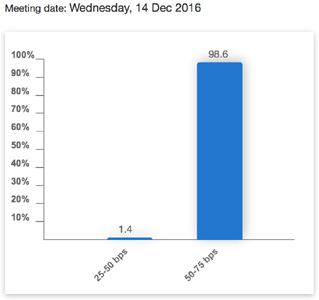 And if you’ve tried to take out a mortgage lately, I don’t have to tell you which way interest rates are headed: no thanks to a spike in 10-year Treasury yields, which hit a 17-month high last week, you’re now paying more than 4.0% on a 30-year mortgage. 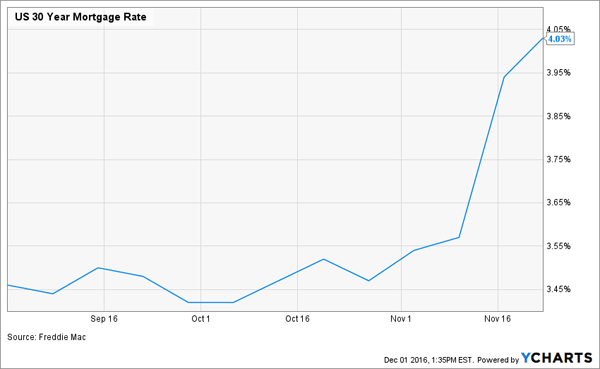 So, time to hold off on dividend stocks, then, right?

[ad#Google Adsense 336×280-IA]No way. Now is the time to go on offense, using any short-term rate hysteria to snap up top-quality dividend growth stocks and real estate investment trusts (REITs), such as the 4 companies I’ll show you in a moment.

Because first-level investors have it all wrong when it comes to dividend stocks and interest rates: namely that the former lag as the latter rise, tempting income seekers to chase higher yields on so-called “safe” investments like Treasuries.

The record shows the opposite.

Here’s how the iShares Select Dividend ETF (DVY) performed vs. the SPDR S&P 500 ETF (SPY) during the last rising-rate period, from July 2004 through June 2006. 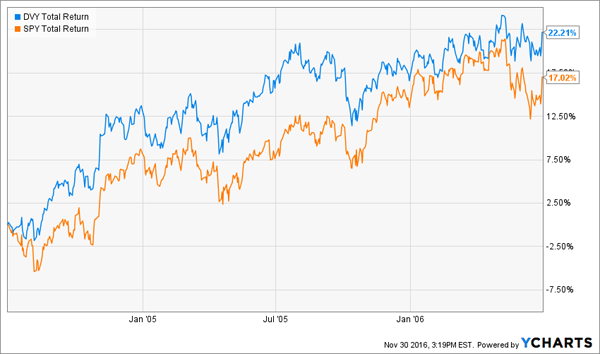 Which brings me back to the 4 stocks I mentioned off the top. Each is priced to buy now and, as a nice bonus, will almost certainly announce a hefty dividend hike in the next couple of weeks. It’s like getting a raise on your first day on the job!

The Poster Child for Dividend Growth

If you thought DVY did well in the last rising-rate period, just look at how Boeing (BA) did. 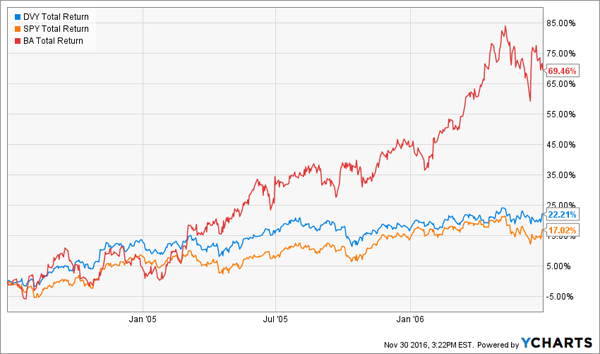 Why the huge outperformance? Dividend growth: the company hit the afterburners on its payout, juicing it by 50% in that time.

Fast-forward to today, and Boeing’s payout growth continues to shine. Last December, it announced a 19.8% hike, in the wake of a 24.6% increase in late 2014.

With a reasonable payout ratio (or the percentage of earnings paid out as dividends) of 62.8% and analysts forecasting a 32% jump in earnings per share (EPS) next year, BA can easily afford to give shareholders another big raise, which I expect to happen mid-month.

Some investors worry that airlines will hold off on fleet upgrades after bingeing post-recession, but even if that happens, Boeing can ride it out, thanks to its $462-billion backlog, which equals 4.8 years’ worth of revenue.

And management isn’t sitting back: it’s pushing into the lucrative aircraft parts and services market, with the goal of tripling revenue in this area by 2025. Its military business should also flourish under President Trump.

The topper? BA has lagged the market this year and boasts a forward price-to-earnings ratio of 16.3, well below its five-year average of 17.8.

Take a Second Look at CUBE

I mentioned CubeSmart (CUBE) last week, and I’m pounding the table on this ignored midcap self-storage REIT again today, because we’re just days away from its next double-digit dividend increase.

How do I know? Because CUBE gave shareholders a 31.3% hike for Christmas last year, capping a five-year span that saw its payout surge 162.5%.

It also sports excellent dividend coverage, with its last 12 months of payouts accounting for just 60% of per-share funds from operations (FFO; the REIT equivalent of EPS). Plus, management is forecasting full-year 2016 FFO between $1.43 and $1.44, way up from $1.25 last year.

Overdone rate fears have sent the shares sliding, driving the dividend yield up to 3.4%. Investors haven’t seen the payout near that level since 2009, and if you’d bought back then, you’d be sitting on a 367% total return today. 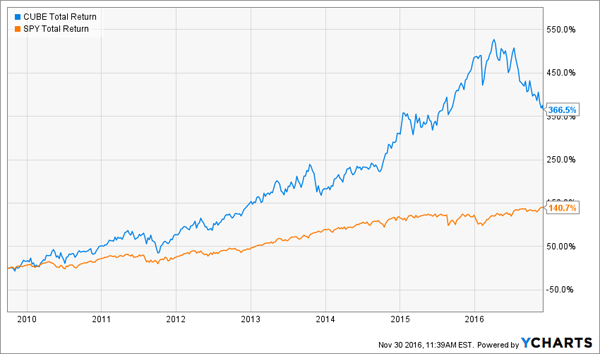 History looks set to repeat, as the strengthening economy drives consumers to buy more stuff—and look for more places to put it. Buying now also gets you a REIT trading at 17.6 times trailing-twelve-month FFO, well below leader Public Storage (PSA), at 22.1 times—and with stronger growth potential, to boot.

That may not sound overly exciting, but stay with me—because there’s more good news ahead.

[ad#Google Adsense 336×280-IA]For starters, the REIT is perfectly placed, with the bulk of its 105,000 apartment units in Sun Belt states like Florida, Georgia and Texas.

That number jumped from 79,000 after it closed its $3.9-billion all-stock merger with Atlanta-based Post Properties (PPS) on Thursday.

It’s a timely move, because the Sun Belt is growing quickly as more people migrate from chillier states.

One more thing: Mid-America joined the S&P 500 on Thursday, replacing Owens-Illinois (OI). That should give the shares a short-term lift as index funds and other investments linked to the benchmark index buy them up.

Income investors tend to overlook MasterCard because the stock yields just 0.7%. But the payout has surged an incredible 1,167% in the past five years, causing the share price to nearly triple. 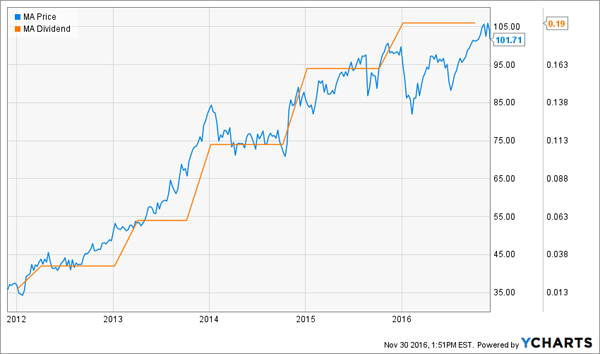 And if you bought back then, you’d be yielding closer to 2.2% on your original investment today.

The company hiked its dividend by 19% last year, after delivering an eye-popping 46% increase in 2014. I’m expecting somewhere in the low 20% range to be announced any day now.

Because MA’s payout ratio is just 20%, giving management lots of room to deliver another outsized raise. The long term also looks bright as the company rides a rise in online shopping and mobile payments to even higher profits: the Street expects EPS of $4.30 in 2017, up 14.7% from a forecast $3.75 this year.

MA is never cheap, and trades at 23.2 times the 2017 forecast, but that’s a fair price, given its growth potential. The stock is also down about 5.5% since Election Day, giving us a nice buy window.

As I just showed you, buying companies that hike their payouts regularly is the key to booking outsized gains in the stock market, no matter what happens in the White House or with the Federal Reserve.

But there’s one thing I forgot to mention.

If you can zero in on companies that throw off progressively bigger dividend hikes year in and year out, you can easily set yourself up for windfall profits of 200%, 300% or more—in 6 years or less.

I’ve zeroed in on 3 companies that are doing just that. All are riding unstoppable trends that will be with us for decades, such as the explosive growth of e-commerce. That’s translating surging profits—and fatter payouts to investors.

One of these companies is a low-key REIT that rents space to corporate data centers. It just handed us a 50% dividend hike, on the heels of a 26% rise last year and a 20% increase the year before.

In the past 6 years, lucky investors in this unsung company have pocketed gains of 354%, driven by a dividend that’s soared 308% in that time! 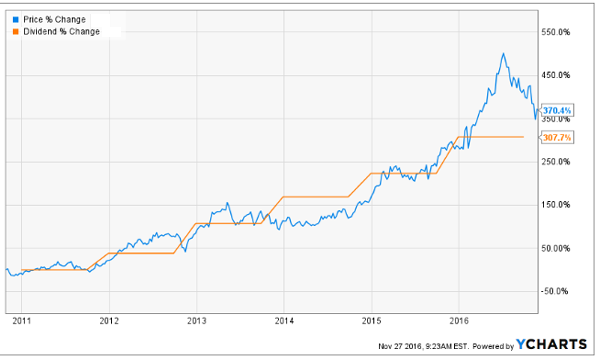 This unloved stock is just getting started … and I’m ready to share its name with you, along with the names of 3 more companies I expect to post gains just as big—or bigger—in the next 6 years.

I can’t wait to share them with you. Simply click here to uncover these 4 winners and get all the details on my proven dividend-investing strategy.