Today I’m going to share three of my favorite dividend stocks from an ignored corner of the market set to soar in President Trump’s first year.

Which corner? The “little guys”: small and mid-cap stocks.

In many ways, the cat’s already out of the bag. As they’ve done with financial stocks, investors have bid up small- and midcaps since Trump’s win. Look at the how the SPDR S&P 600 and the S&P Midcap 400 have performed vs. the S&P 500: 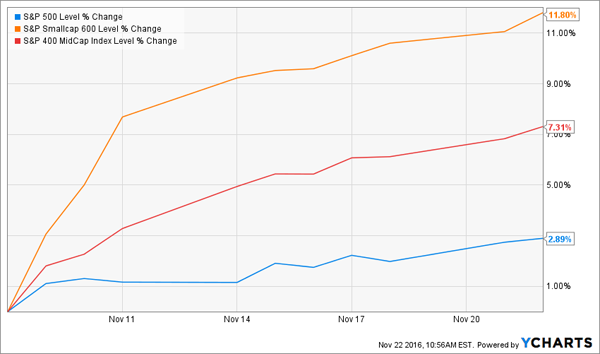 That’s a huge gap … and it makes sense. With the US dollar soaring and Trump threatening to toss trade deals in the shredder, the market’s small fry (which tend to be more domestically focused) are in the catbird seat.

The multinational behemoths of the S&P 500 … not so much.

There’s only one problem if you’re a devoted dividend investor like me. Most small caps don’t pay dividends, as they need to reinvest every penny for growth.

That’s why I prefer midcaps, or companies with market caps between $2 billion and $10 billion. Think of them as “Goldilocks” investments, offering stability, potential for quick, outsized gains and, yes, rising dividends.

Like small caps, they get little attention from Wall Street, which is ridiculous, because midcaps account for 24% of the market capitalization of all US stocks.

That’s right. Wall Street is ignoring a quarter of the market. It’s great news for us, because that research gap lets us find overlooked bargains, even when the midcap indexes are soaring.

Here’s something else few people know: mid-caps have solidly outperformed large- and small cap stocks over the past 20 years. Let’s look at the three indexes in the chart above again, but this time over the past two decades: 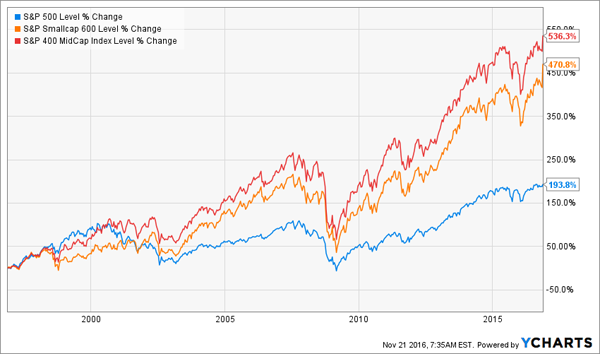 Below are three mid-caps that are red-hot buys now. Two are real estate investment trusts (REITs) that have gone on sale, and one is a hotel operator with a whip-smart management team and a surging payout.

Move Into CUBE Before December

The problem, until recently, is that other investors had figured this out, too. In the five years leading up to last April, shares of midcap self-storage outfit CubeSmart (CUBE) had soared 220%.

Meantime, CUBE’s trailing-twelve-month dividend yield had dwindled to 2.2%—pathetic for a REIT, and a situation unlikely to last long. 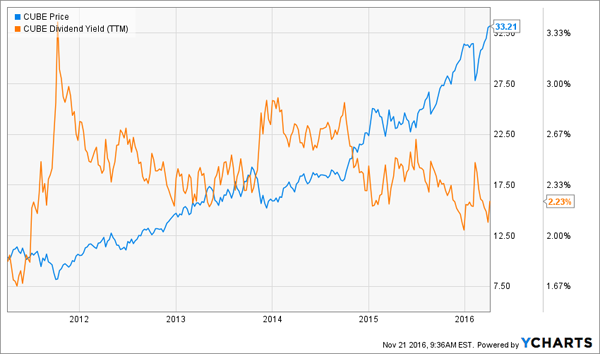 It didn’t; CubeSmart’s shares have sold off since April, and its yield has soared to 3.5%, a seven-year high. 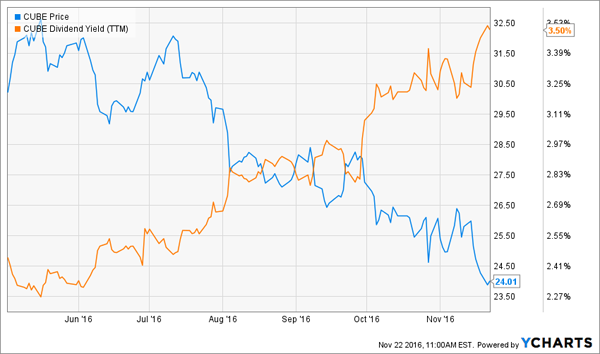 If you’re worried investors will shun CUBE as interest rates rise, consider this: the REIT has hiked its dividend by 163% in the past five years, including a monster 31% hike announced last December.

And thanks to its rising FFO (up 11.8% year-over-year in the third quarter) and reasonable payout ratio (60.4% of trailing-twelve-month FFO), I expect it to announce another double-digit dividend hike in early December.

A Retail REIT in the Bargain Bin

Tanger Factory Outlet Centers (SKT) is also hiking its payout at a rapid clip: in the past five years, the dividend is up 63%—and that doesn’t include a $0.21-a-share special dividend paid in late 2015. The stock yields 3.9%.

Most people think retail REITs will be among the hardest hit when rates rise, because they tend to carry a lot of debt to fund new developments. But this thinking ignores the upside of rising rates: they signal a growing economy, which drives up demand for (and rents on) Tanger’s space.

The REIT is already a top performer in this area, clocking big rent increases on renewed leases in the third quarter, while boosting its occupancy rate to 97.4%. Both factors are translating into skyrocketing FFO: 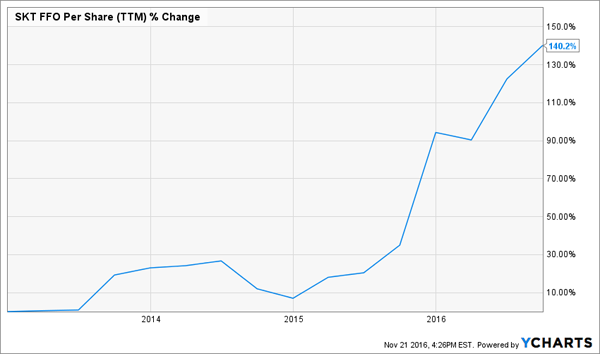 Even so, management’s staying disciplined: Tanger just opened its latest shopping center, in Daytona Beach, and plans to open two more, in Fort Worth, Texas, and Lancaster, Pennsylvania, next year.

If you’re still worried about rising rates, check out how SKT performed vs. the SPDR S&P 500 ETF (SPY) the last time rates headed up, from July 2004 through June 2006. It wasn’t even close! 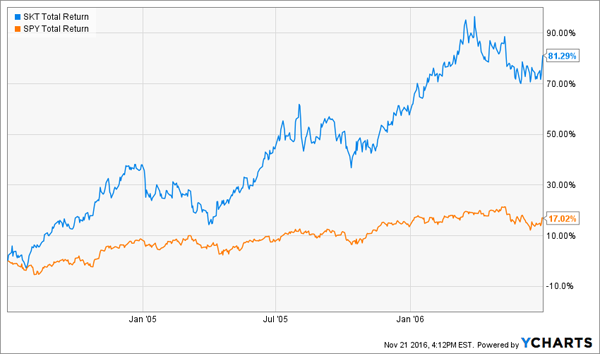 If you’d asked me about this one back in June, I would’ve advised putting it on your watch list, but thanks to irrational interest rate fears, SKT is back where it was a year ago.

WYN: Come for the Dividend, Stay for the Gains

The company has been expanding aggressively in China, where it now has more than 1,000 hotels. That positions it to profit as the country’s business-travel market—which is now the world’s biggest—booms.

[ad#Google Adsense 336×280-IA]Wyndham’s Chinese hotels also put it on these travellers’ radar when they head abroad on vacation—something they’re doing a lot more of these days: according to the World Travel & Tourism Council, Chinese tourists spent $215 billion outside their home country in 2015, up 53% from 2015.

To be sure, there are some risks here: Wyndham’s international business does expose it to currency fluctuations, for example, and there’s always the specter of Airbnb.

But this is a management team that knows how to execute: Wyndham launched its streamlined loyalty program last year and has since expanded it to let members use their points on experiences, vacation rentals and time-shares. Membership has surged from 41 million to 48 million members as a result.

Those members give Wyndham an edge over the sharing economy, as does the company’s expansion into other vacation properties beyond hotels.

The stock’s bargain price-to-earnings ratio also offers some downside protection. At 14.2, it’s below WYN’s five-year average of 18.7 and far below rivals Marriott International (MAR), at 27.3, and Hyatt Hotels (H), at 36.5.

What’s more, buying now locks in a trailing-twelve-month dividend yield of 2.6%, near highs not seen since April 2009—and investors who bought back then have seen a 1,690% total return in a little more than seven years. 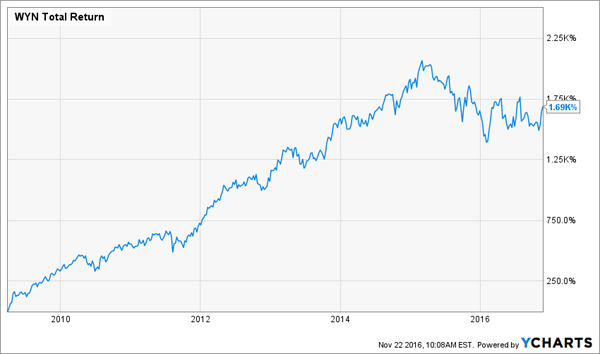 Which brings me to dividend growth.

In the past five years, Wyndham has boosted its quarterly payout by 233%, and further hikes are a lock: the company has paid out just 37.0% of its last twelve months of earnings as dividends, and analysts are calling for a 9.3% increase in earnings per share in 2017.

The 8% Solution to a Secure Retirement [sponsor]

Midcap dividend growers like these three deserve a place in your portfolio, but it will still be a long time before you’ll yield 8% on any one of them, even with their outsized payout growth.

But 8% is exactly what you get from the 6-stock income portfolio I’ve assembled.

With an income stream like that, many retirees can live on dividends alone, without ever having to sell a single stock!

I can’t wait to show you the nuts and bolts of my 8% retirement strategy and the 6 powerful investments it’s based on. Simply click here and I’ll give you the details of these high-income wonders.