Pork and beef prices at the grocery store are headed higher.

That means your annual holiday roast will likely cost more this year. And while that’s bad news for your grocery bill, it’s actually great news for traders.

And that means we could be looking at big returns over the next couple years.

But as you can see in the chart below, prices have rallied recently… 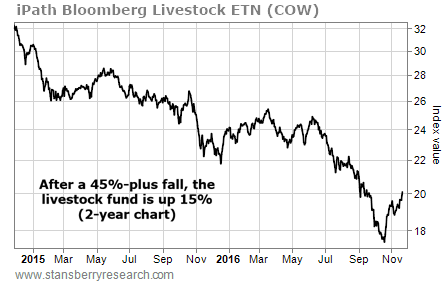 COW is up 15% over the last month. That’s a big move. But we have more reason to suspect that this uptrend has plenty of room to run…

When prices hit extremes, sentiment gauges (how the market views a stock or commodity) are useful. That means sentiment isn’t a good tool for investing most of the time. But right now, we’re at an extreme.

According to the excellent SentimenTrader website – the best way to gauge market sentiment – cattle prices peaked in 2014 at the same time optimism peaked. Today, we’re at an opposite extreme. Cattle sentiment hit its peak pessimism in August. COW shares bottomed shortly thereafter.

We’ve seen a similar pattern in hog prices, too. Sentiment toward hogs bottomed in October, right around the same time hog prices bottomed. Since then, hog prices are up nearly 20%.

I expect to see prices of cattle and hogs move higher from here. Like I said earlier, that’s bad news for bacon and steak lovers. But it’s creating a great trading opportunity.

All three funds are direct plays on cattle and hog prices. And all three should do well as sentiment returns to normal. Prices are already rising. Short-term uptrends can last as short as five months. The last bull market in livestock lasted 18 months and yielded 30% gains.

A word of caution, though… You don’t want to make this trade with general agricultural funds like the PowerShares DB Agriculture Fund (DBA). DBA holds a number of commodities – like soybeans, wheat, corn, and sugar – and only has about 22% exposure to cattle and hogs. So during the 2014 bull market in livestock, the three livestock funds returned as much as 32%, but DBA only rose about 6%.

This trade should make you enough money to splurge on a fancy crown roast for your holiday dinner this year.