I wish my high school would have had a class on personal finance.

You know, a class where one would learn about saving, investing, debt, and how to generally go about being responsible with your money.

It would have been far more beneficial than knowing the periodic table or how to dissect a frog.

[ad#Google Adsense 336×280-IA]I might have started saving and investing years before I did, and I probably wouldn’t have taken on so much debt in college.

The great thing is that living well below your means and investing your capital intelligently is so incredibly powerful, I was still able to become financially free at 33 years old, even though I didn’t start saving and investing until I was almost 28.

While it might be somewhat intuitive to understand how to save money (you simply spend less than you make), investing seems like a foreign language to some people.

However, it needn’t be that way.

For instance, I invest in a rather simplistic manner.

I stick to high-quality companies that are able to grow not only their profit over long periods of time but also their dividend payments.

But I don’t want to hear about it; I want to see it.

And what better proof of growing profit than an ever-larger check written out to me?

Well, that’s what dividends essentially are: they’re proof in the profit pudding. If the latter is growing, so should the former.

So I stick to high-quality dividend growth stocks that have that proven track record.

This mantra is how I built the real-life six-figure portfolio that currently generates five-figure dividend income for me. And that dividend income is likely going to grow faster than inflation for the rest of my life.

That larger universe has been tracked and mapped out by a gentleman named David Fish, who maintains his illustrious Dividend Champions, Contenders, and Challengers list – a document that contains information on more than 700 US-listed stocks with at least five consecutive years of dividend increases.

While just knowing about these stocks is an advantage over many other people, there’s a bit more to it.

If that imaginary high school class would’ve existed, it would have also taught how important it is to buy stocks at a price below fair value.

Price and yield are inversely correlated. A lower price will almost always cause the yield to correspondingly rise.

Meanwhile, capital gain, the other component, is also positively influenced by the upside that exists between the lower price paid and the higher value of the stock.

And it all works to lessen your risk. You’re simply spending less per share, meaning you’ve built in a margin of safety.

This is, of course, compared to what the same stock would offer if it were priced at or above fair value.

Price is simply what you pay; value is what you’re getting for your money.

This is true with stocks. It’s also true with everything else in life.

Of course, ascertaining the price of stocks is very easy. One simply pulls up Google Finance and inserts a stock ticker. Very easy.

But ascertaining a stock’s intrinsic value is a bit more difficult, and a bit more subjective.

For this, that class would have likely recommended using a tool or a set of tools designed to help estimate a stock’s fair value.

Once you have a good idea of what a stock is worth, you’re then empowered to determine what kind of price you should pay.

Yep. The price of this stock looks to be lower than its intrinsic value.

Want to know which stock?

First, it’s probably not an investor’s first choice for an investment. That’s because of the cyclical nature of the automotive industry.

However, what’s great about Magna, compared to auto manufacturers, is that they’re widely diversified across both manufacturers and countries. So any issues that might be specific to one manufacturer or country don’t hurt Manga as much as it might hurt a particular manufacturer.

While manufacturers face issues like high advertising costs, recalls, and the necessity of designing new models every few years, Magna does not.

In addition, Magna’s margins are stronger and the capital requirements aren’t quite as high, leading to a stronger balance sheet.

Another aspect about the stock that’s really interesting is that shareholders are practically promised a dividend.
Magna has a “corporate constitution” that entitles shareholders of common stock to dividends that amount to at least 10% of Magna’s after-tax profits for the corresponding financial year.

So no profit might mean no dividend. But as long as Magna registers after-tax profit, shareholders are getting paid. It’s the only company I’ve run into that has something like this.

But as a dividend growth investor, I don’t want to see just dividends but growing dividends.

Well, Magna is growing its dividend rather aggressively.

The dividend was notably cut in 2009, due to what was a generational struggle in the automotive industry during the financial crisis.

But they’ve made up for lost ground, growing their dividend at a compound annual rate of 28.1% over the last five years.

And with a payout ratio of just 20.2%, there’s still plenty of room left for many more dividend increases.

The only potential drawback to the dividend right now is the yield.

At just 2.45%, it isn’t nearly as high as some auto manufacturers out there.

However, Magna doesn’t have those aforementioned drawbacks.

I also think the fundamentals and long-term track record are much better than most manufacturers I’ve seen, as I’ll show below.

We’ll first take a look at Magna’s revenue and earnings growth over the last 10 years. And then we’ll compare that to a near-term forecast for profit growth. This will tell us where Magna’s been and where it’s likely going, which will later help us value the stock.

Prolific improvements in profitability substantially benefited the bottom-line growth, as did share buybacks.

Looking out over the next three years, S&P Capital IQ believes Magna will compound its EPS at an annual rate of 17%, which would be right in line with the last decade. While certainly realistic, any major slowdown in auto sales and manufacturing would impact Magna.

These numbers are so far much better than what you’ll find with the lot of major manufacturers out there.

And it gets better.

Magna’s balance sheet is one area of real strength, which stands in stark contrast to heavily-indebted domestic auto makers.

The long-term debt/equity ratio for the company is just 0.26, while the interest coverage ratio is over 54.

This gives Magna a lot of flexibility, which is really valuable in such a cyclical industry.

Profitability is also great for the industry, with the company averaging net margin of 4.75% and return on equity of 17.52% over the last five years.

And while domestic manufacturers were either staving off bankruptcy or entering it during the financial crisis, Magna not only continued doing brisk business but even continued to pay a dividend (albeit a much lower one). Their profit was hurt dramatically, due to the industry dynamics, but they bounced back rather quickly.

Magna’s size and diversification are competitive advantages, in my view.

And as vehicles become increasingly complex, this only benefits a company like Magna.

But is the stock attractively priced right now?

The P/E ratio is sitting at just 8.22 right now. That’s less than half the broader market. It’s also well below the stock’s five-year average P/E ratio of 11.4. And the yield is also more than 30 basis points higher than its five-year average. Moreover, investors are paying substantially less for the company’s cash flow than they usually have, on average, over the last five years.

While earnings could be peaking in the near term with auto sales, the stock still seems very cheap.

I valued shares using a dividend discount model analysis. I factored in a 10% discount rate. And I assumed a long-term dividend growth rate of 8%. With the low payout ratio, the near-term dividend growth may actually be quite a bit higher. But I think there’ll be a flattening out as the payout ratio increases. In addition, this is a very cyclical industry, which means it could be a bit bumpy. The DDM analysis gives me a fair value of $54.00.

[ad#Google Adsense 336×280-IA]The reason I use a dividend discount model analysis is because a business is ultimately equal to the sum of all the future cash flow it can provide.

My analysis indicates the stock is very undervalued right now. But how does analysis and valuation compare to that of some professional analysts that track this stock? Let’s find out.

Morningstar rates MGA as a 3-star stock, with a fair value estimate of $46.00.

I came in the highest, but I also wasn’t too far off from what the latter firm came up with. Nonetheless, I like to average out the valuation figures, which should help to concentrate accuracy a little bit by blending these different perspectives together. That final valuation is $50.73, which would mean this stock possibly 25% undervalued. 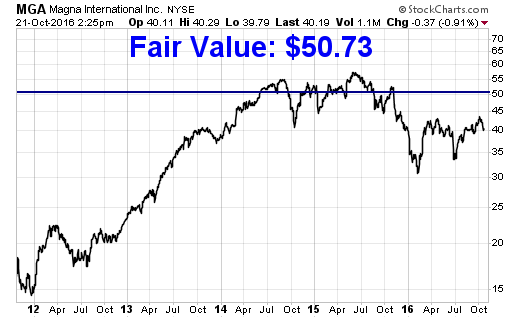 Bottom line: Magna International Inc. (MGA) is a massive and diversified auto supplier that’s somewhat insulated from some of the issues that can plague the auto manufacturers. Their “corporate constitution” ensures shareholders are getting paid as long as Magna is turning a profit, and 25% upside on top of a yield that’s higher than its recent historical average offers a lot to like for dividend growth investors right now.