I know there are a lot of people out there that view the stock market like a giant casino.

You play the game, you take your chances.

That’s unfortunate, though, because if you invest intelligently and for the long run, it’s not like a casino at all.

A casino is a business designed to extract money from its customers through services and the favorable (for the house) odds of its games.

[ad#Google Adsense 336×280-IA]Stocks, meanwhile, represent a slice of ownership in a real business.

And in the stock market, long-term investors buying up and holding quality stocks are “the house”.

The odds are in your favor when you buy a slice of a great business at a price less than it’s worth and hold it for a long period of time.

Well, when I think of great businesses, I think of high-quality dividend growth stocks.

These are stocks that still represent that slice of ownership, but you’re going to be owning a slice of a business that generally is not only increasing its profit over the long run but also paying out increasing dividends to shareholders.

And that’s really what an owner should expect: you want to own a business that is able to increase its profit from one economic cycle to the next, but you also want your fair share of that increasing profit.

You can see what I mean by checking out David Fish’s Dividend Champions, Contenders, and Challengers list, which is really the greatest resource on dividend growth stocks I know of.

Mr. Fish has collected information on almost 800 US-listed stocks with at least five consecutive years of dividend increases – increases which, of course, are generally funded by increasing profit.

On this list, you’ll find dozens upon dozens of stocks that have paid shareholders increasing dividends for decades.

And I can tell you that I eat my own cooking: my real-life, real-money personal portfolio (that I’m betting my early retirement on) is chock-full of high-quality dividend growth stocks.

This portfolio, by the way, is on track to pay me well over $10,000 in dividend income this year!

But as great as this strategy is, it’s not as simple as randomly picking any stock on Mr. Fish’s list and buying it at any price.

The key is to buy a high-quality dividend growth stock when it’s undervalued.

By doing so, you’ll receive a higher yield, stronger long-term total return prospects, and lower risk (all relative to a higher price).

It’s all quite intuitive.

All else equal, a lower price will always mean a higher yield.

That higher yield boosts your long-term total return prospects, since yield is one major component of total return.

The other component, capital gain, is also given a nice potential boost via the upside that exists between the lower price you pay for a stock and the higher value of it (assuming it’s undervalued).

That’s, of course, on top of any long-term capital gain potential that exists as the business naturally earns more and becomes more valuable over time, elevating its stock price.

And when you pay less, your lower your risk.

You’re either spending less money (by buying a fixed number of shares) or you’re securing more shares for your capital (by spending a fixed amount of money).

Either way, you’re obtaining a margin of safety when you pay less than that which a stock is worth.

If a stock is deemed to be worth $50 but you pay $40, that $10 exists as a margin of safety – a company would have to see its value crater by more than $10 per share before the price you paid becomes too high.

This is why it’s so important to value a stock before you buy it, and then pay a price as far below that value as possible.

But fear not. This process can actually be quite straightforward.

One great resource that’s designed to simplify the valuation process for high-quality dividend growth stocks is available right here on the site.

Designed by fellow contributor Dave Van Knapp, as part of his overarching series of lessons on dividend growth investing, it’s a guide to valuing just about any dividend growth stock out there.

Once you have a good idea of what a stock is worth, you’re armed with an incredible piece of knowledge.

From there, it’s up to you to stay patient and pay less than that amount.

But I have even more good news…

That’s because there’s a high-quality dividend growth stock that appears to be undervalued right now.

Ready to find out which stock it is?

Cardinal Health Inc. (CAH) is a major distributor of pharmaceuticals and medical supplies to a variety of healthcare clients.

While not a household name, they don’t need to be do to what they do. Nonetheless, Cardinal Health is an absolute monster – annual revenue is well over $100 billion.

And with the nation’s population getting larger, richer, and older, access to high-quality healthcare products like pharmaceuticals should remain strong for the long haul.

Cardinal Health is perfectly placed to capture some of that growth. They serve more than 20,000 pharmacies nationwide, provide resources to more than 75% of US hospitals, and serve more than 1.8 million patients with 40,000 products in home healthcare.

This bodes well for long-term shareholders.

You know what else bodes well?

The company’s penchant for increasing its dividend to shareholders, which is something it’s done for 20 consecutive years now.

And if you think a company with such a massive revenue base and long-standing dividend growth track record might be unable to deliver big dividend raises any more, you’ll want to think again: the 10-year dividend growth rate stands at 27.4%.

Meanwhile, the payout ratio is only 41.6%, which leaves plenty of room for more dividend increases.

Indeed, Cardinal Health increased its dividend by 16% just a few months ago.

The only potential drawback regarding the company’s dividend metrics might be its yield.

At just 2.26%, there’s something to be desired there from investors who are in need of a bit more current income.

However, it’s important to be mindful that this is almost 40 basis points higher than the stock’s five-year average yield of 1.9%.

We’re checking pretty much all the boxes.

But as much as there is to like about the dividend, a company’s underlying revenue and profit growth is really what drives dividend growth over the long run.

That’s why we’ll next take a look at the last decade for Cardinal Health in terms of its top-line and bottom-line performance, before peeking at a near-term forecast for earnings growth.

This will also help us value the company’s stock a bit later.

Solid growth here, especially across the bottom line, which was boosted by a rather substantial share buyback program that saw Cardinal Health reduce its outstanding share count by approximately 18%.

Of course, we don’t invest where a company’s been but where it’s going.

Looking out over the next three years, S&P Capital IQ anticipates that Cardinal Health will compound its EPS by an annual rate of 13%. Citing some recent acquisitions and continued buybacks, this growth would represent strong acceleration in comparison to what we see above.

Cardinal Health’s balance sheet continues the theme of quality, with a long-term debt/equity ratio of 0.75 and an interest coverage ratio over 13.

The company’s profitability metrics are also robust, considering that this business model is built on scale rather than big margins. Margins are razor thin in this industry, though Cardinal is very competitive in this regard.

Over the last five years, Cardinal Health has averaged net margin of 0.99% and return on equity of 16.06%.

All in all, this is a rather appealing idea as a long-term dividend growth stock investment.

But what about the valuation? Is the stock attractively valued right now?

The P/E ratio is 18.41, notably below both the broader market and the stock’s own five-year average P/E ratio of 26.7. The price investors are paying for Cardinal Health’s cash flow is also much lower than usual, while the yield, as noted earlier, is well above its five-year average.

Seems cheap. But what, then, is a good estimate of the stock’s intrinsic value?

I valued shares using a dividend discount model analysis. I assumed a 10% discount rate. And I factored in a long-term dividend growth rate of 8%, which is realistic, considering the payout ratio and historical growth. The DDM analysis gives me a fair value of $96.96.

My opinion is that this stock is simultaneously high quality and priced below its intrinsic value. Is that perspective way off base? Let’s see.

Morningstar rates CAH as a 3-star stock, with a fair value estimate of $79.00. 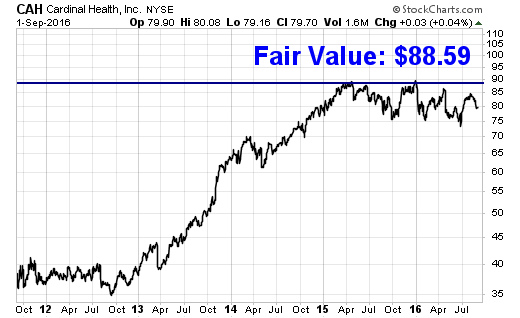 Bottom line: Cardinal Health Inc. (CAH) is a high-quality dividend growth stock that’s perfectly positioned to capture plenty of future growth from long-term health tailwinds, and share that growth with shareholders in the form of an increasing dividend. The stock looks to also offer 11% upside on top of that, which is why I recently initiated a position. I view this is as a great long-term opportunity here.