Barron’s led this weekend with a cover article on how it is looking more and more like Hillary Clinton will become the 45th president of the United States come November.

Personally, as a small government fiscal conservative I find both choices we have this election appalling. However, as an investor you have to play the hand that is dealt.

I believe Mrs. Clinton’s presidency will look nothing like her husband’s eight years in office.

[ad#Google Adsense 336×280-IA]After a fairly disastrous first two years of office, Mr. Clinton swung sharply to the middle after the 1994 mid-term debacle where his party lost 53 congressional seats and control of the House.

By 1996, Mr. Clinton declared the era of “big government” over in his State of the Union speech. The economy and market soared as a result.

Times have changed markedly since then. Both parties have moved to the extremes and away from the middle. Blue Dog Democrats and Rockerfeller Republicans have largely gone the way of the Do-do bird and the electorate is as polarized as it has been since the late 60s. Compromises between the two parties are few and far between.

Nor will Mrs. Clinton enter office with economic tailwinds at her back that her husband enjoyed. In the fourth quarter of 1992, just before Mr. Clinton entered office, GDP was growing north of four percent, the Cold War was ending, there was a “peace” dividend to be spent, and the budget deficit and national debt levels seem trite by comparison. In addition, the country’s demographics were much more favorable, there was no Al Qaeda or ISIS, and the global demand picture was much, much brighter with China just embracing their journey towards capitalism and decades of 10% annual growth.

Mrs. Clinton will enter office with the economy continuing to be mired in by far the weakest post-war recovery on record. Her predecessor will go down as the only president in U.S. history that served a full term and did not achieve even one year of at least three percent GDP growth. In addition, with the national debt approaching $20 trillion and with the Federal Reserve’s balance sheet quintupling since 2008, there is not nearly as much “ammo” available for her administration as it begins its first term.

I think investors will have to be very cautious over the next few quarters and I would have the same pessimistic stance if Mr. Trump manages to quit shooting himself in the foot and manages to pull off a huge upset. Neither candidate will have much of a honeymoon given their high unfavorable ratings and how far the parties are apart in their ideologies.

To a large part, investing is going to be as much about what to avoid as what to buy. First off, banks and financials are going to continue to be challenged in a Clinton administration. Given her base has made heroes out of Elizabeth Warren and Bernie Sanders, regulation is not going to be reduced and might even be increased on the financial sector. Already, there is talk of repealing Glass-Steagall which ironically was passed in the second term of her husband’s tenure. This will do nothing to prevent the next financial crisis but will be one more headache for the banking system.

In addition, nothing in either candidates’ platforms gives me any confidence the country will boost growth meaningfully from the two percent slog we have been in for some seven years. This means interest rates will remain low and will continue to pressure net interest margins at banks and bond returns at insurance companies. I am heavily underweight and almost out completely from financial stocks given this outlook.

Energy will be another loser under a Clinton administration, other than alternative energy which is a big winner with the party’s base. Mrs. Clinton’s presidency will probably be the final nail in the coffin of the domestic coal industry and will be a headwind for other fossil fuel producers as well. The industry already has myriad problems with tepid global demand, a huge amount of oil in storage, and a glut of natural gas. I am heavily underweighted this sector of the market as well and have been for over a year now.

Healthcare will be a mixed bag. Biotech and Pharma should be okay as long as the Republicans retain the House. If it is a landslide election, all bets are off as we could see significant legislation around drug prices. Hospitals should do okay as coverage continues to get expanded to the uninsured and Obamacare marches forward and maybe expands. 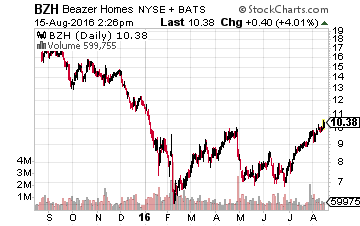 Construction and housing stocks should also do well. I expect a significant infrastructure bill in 2017 regardless of who enters the White House as it is one of the few areas of agreement between the parties.

Homebuilders should do well and Mrs. Clinton will want to juice the housing market with home ownership rates at their lowest levels since 1965, mortgage rates at historical lows, and with the industry a huge source of job creation.

I own and would still buy home builders Lennar (NYSE: LEN), Taylor Morrison (NASDAQ: TMHC) and LGI Homes (NASDAQ: LGIH) which I have done well with in 2016 but still look attractive here. Beazer Homes (NYSE: BZH) is more of a turnaround story as it reduces its debt load and interest costs.

The stock has seen substantial insider buying of late and is very undervalued compared to peers on a price to sales and price to book value comparison.

This is how I am preparing for an election that I can’t wait to be over.