Longtime energy investors remember the days before hydraulic fracking and horizontal drilling. Back then, everyone was concerned about peak oil.

In case you need a refresher, peak oil is the idea that we’ve hit the maximum rate of oil extraction. From there, production can only dwindle.

[ad#Google Adsense 336×280-IA]That idea might sound silly today. After all, the U.S. is currently awash in shale oil.

But there’s a small group of people who aren’t laughing.

They believe we may never again produce oil at the rate we are today.

A Record-Setting Year… But Not the Good Kind

On Friday, May 13, IHS Energy released an alarming new study. It found that the volumes of oil and gas discovered outside of the U.S. last year were the lowest since 1952.

Oil alone set a record low, with only 2.8 billion barrels of oil equivalent found during 2015. 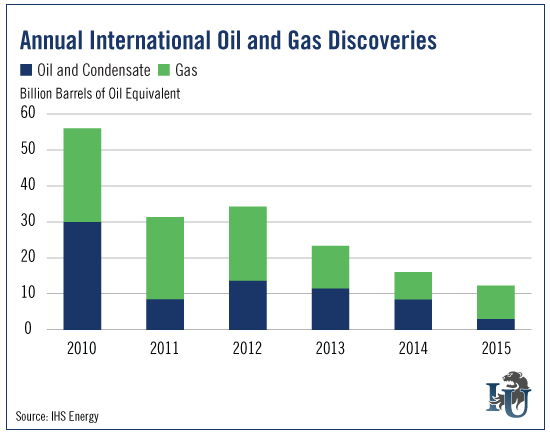 One major reason for the low number of discoveries is the lack of E&P companies out looking for oil.

Deepwater (1,000-5,000 feet) exploration was down 20%. Ultra-deepwater (greater than 5,000 feet deep) dropped by a whopping 40%. Those numbers aren’t likely to improve this year, either. Exploration and drilling budgets are even lower today than they were in 2015.

And a quick scan of my offshore sources confirms many customers are canceling their offshore rig orders. Some are even paying hefty fees in order to do so.

It can take three to five years to build one of these massive rigs. So that sector won’t be recovering anytime soon.

A Big Hole in Our Oil Supply

The vast majority of large, conventional undiscovered oil and gas fields are offshore. Unfortunately, these fields are uneconomical to develop with oil prices below $80 per barrel.

That’s why a few years ago, when prices first dipped under $60, many oil companies refocused their efforts. They bet big on U.S. shale.

Now, many are regretting that decision. Most shale basins – other than the Permian – are losers at current WTI prices. (Though there are some winners, as I showed you here.)

If we look out five to 10 years, we see a big gap forming between supply and demand… again.

Lack of conventional exploration, especially offshore, will leave us with a big hole in our oil supply. And if we go by the IHS numbers, all the oil in shale formations won’t be enough to fill the gap. The study puts global shale oil production at just 10% to 15% of our total supply by 2040.

So, the question is… are we actually heading toward Peak Oil 2.0?

Two Factors That Will Bolster Production
The answer is complicated. As a society, yes, we’ll have to get there eventually. (Emphasis on eventually.)

But in the meantime, a lot can – and will – happen to bolster production.

First, as demand for oil starts to outstrip supply, prices will rise. They will eventually hit the point where well-positioned E&Ps can start drilling again.

Another force knocking down our current glut? Bankruptcies in the industry.

Smaller producers are going out of business left and right. As a result, we are going to have to dig into reserves to fill the gap. This will, in turn, boost prices… making it possible for Big Oil to finance new offshore projects.

It may be years before we see oil prices at their pre-recession levels. But even a slight boost will make a short-term production increase feasible.

That means Peak Oil 2.0 should still be a long way off.