Back in March, I recommended a broad play on platinum that’s returned 56% more than the S&P 500 over the same period.

Those gains didn’t happen by accident. You see, gold and platinum have a special relationship, the so-called “gold-platinum ratio.”

[ad#Google Adsense 336×280-IA]In fact, since platinum is about 30 times more rare than gold, it’s usually the more expensive of the two metals.

But right now, the ratio is reversed, and gold is the more expensive metal.

Platinum prices are up more than 11% since March in a classic case of low supply and high demand.

Output from South Africa, the world’s top producer, has plunged amid dwindling capital investment and spiraling labor unrest. On the other hand, demand from car makers, the most important platinum consumers, in need of autocatalysts has surged due to dramatically higher auto sales.

What’s more, the platinum deficit is growing, and many miners have seen their share prices more than double.

Now I’ve found the one mining stock with the most room left to run. Like I said, the ratio is swinging back in platinum’s favor right now. So there’s still time to participate in this lucrative bull market and leverage your gains in the process…

…but not for much longer.

What the Platinum-Gold Ratio Tells Us Now

Let me show you a chart that perfectly illustrates the special relationship between platinum and gold. It’s helpful for understanding why prices are what they are now, and, what’s more, why time is running out to book maximum upside from this situation. 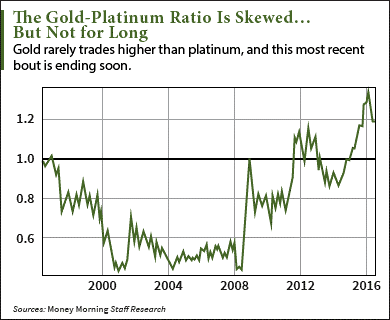 Over that time frame, gold has averaged about 0.73 the price of platinum.

But in the depths of the 2008-2009 financial crisis, the normal relationship got out of whack, and the ratio soared.

It did pull back, but then kept rising and basically tripled from near 0.4 to over 1.3.

Since the middle of 2015, gold has become the most expensive relative to platinum that it has been since 1997.

The ratio peaked in late February. Since then, the gold-platinum ratio has begun to correct, falling back to the 1.2 level. In the process gold has risen, but platinum has risen faster, gaining 11% or $109 per ounce.

Right now, gold still trades at a 24% premium to platinum, rather than the normal 27% discount.

Now, I expect the ratio to continue its retreat, but I certainly don’t envision gold getting much cheaper – there’s far too much chaos and financial repression right now for that.

So under these conditions, platinum should keep rising even more.

But it’s not all about the gold-platinum ratio…

There are other reasons, fundamental reasons, platinum is due to continue its spectacular climb.

About 40% of the platinum consumed each year finds its way into the auto industry. As laws against polluting emissions get stricter and become more widely adopted around the globe, the demand for platinum rises.

Impala Platinum Holdings Ltd. (JSE: IMP), the second-largest producer, sees deficits that will persist through the medium and into the longer term, thanks to the metal’s crucial anti-pollution properties.

Just recently, the World Platinum Investment Council has said it expects investment demand to dramatically eat into supplies. They’ve estimated this year’s deficit could triple that of 2015, reaching as high as 455,000 ounces. Johnson Matthey Plc. (LON: JMAT) also foresees shortfalls this year, and research firm Metals Focus expects 2016 platinum mine production to be off by 5%.

There’s only one indicator that’s not flashing fully green: Slowing demand in China for luxury platinum jewelry. According to GFMS analysts, we could see a double-digit drop this year for Chinese platinum jewelry, after a 4% retreat last year.

And yet news from the mining side is encouraging. Lonmin Plc. (LON: LMI), the world’s third-largest platinum producer, said that its cost-cutting initiatives have allowed the company to become cash-positive in the first half of the year. Its shares are up an astounding five times since late January.

So here’s what could happen next, and how you can grab profits like that…

How to Get the Most Upside from Platinum’s Rise

If platinum were only to correct upwards to reach the average of the gold-platinum ratio of the past 20 years, we’d see platinum reach a 38% premium to gold. With gold sitting just below $1,280, that would mean $1,766-per-ounce platinum.

Now, if gold heads higher – a scenario I expect – and the gold-platinum ratio overshoots, rather than just revert to the 20-year average, $2,000 platinum looks like a reachable target.

In either situation, in order to leverage those kinds of gains, I suggest taking a position in Stillwater Mining Co. (NYSE: SWC).

Stillwater is the only U.S. producer of platinum and palladium. It’s a $1.3 billion company producing 520,000 ounces from its mines, and another 551,000 ounces of platinum group metals through its recycling facilities.

In the first quarter, Stillwater managed to lower its all-in sustaining costs by a whopping 19.7% to $613 per ounce over the same period last year. And with the prices of palladium and platinum on the rise, profits are sure to follow.

But now, with platinum prices rising fast and set to soar, Stillwater is poised to do a lot of catching up. I don’t think we’ll have to wait long for these shares to double or better like their platinum mining peers.