The market has rocketed up since hitting its yearly lows on February 11th. After posting deep losses in the first six weeks of 2016, equities have been on fire. Stocks have not only recaptured all of their lost ground from January and early February but are now up slightly for the year.

However, I am not sanguine that the rally can continue.

This has been a key component to the stock market rally and also to the improvement in the high-yield credit markets.

In addition, the S&P 500 is still in a “profit recession” with first quarter earnings reports very likely to show the fourth quarter in a row that earnings within the 500 companies in the S&P declining year-over-year.

Throw in a possible “Brexit” and what is shaping up as what could be the nastiest presidential campaign in my lifetime and it is hard to be that optimistic on the markets as we begin the second quarter.

However, there are still some relative bargains among equities. I am particularly interested in stocks that insiders are still buying despite the recent rally in the market. Here are a few in the biotech and healthcare arenas I am keeping my eye on and that look attractive here. 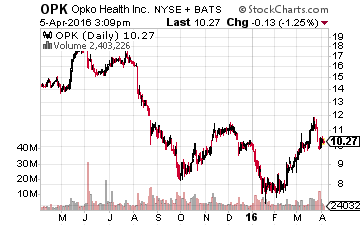 The stock was in the in the news last week.

In fact, the shares fell nearly 10% early in the week when OPKO announced it had received a Complete Response Letter (‘CRL’) from the FDA regarding its New Drug Application (‘NDA’) seeking approval of RAYALDEE (calcifediol) for the treatment of secondary hyperparathyroidism in patients with stage 3 or 4 chronic kidney disease and vitamin D insufficiency.

Opko should be able to get RAYALDEE back on track as the FDA’s concerns centered around manufacturing at its third party facility and not the drug itself. Analyst and investment firm Ladenburg immediately came out after this news and reiterated its Buy rating and $20.00 a share price target on Opko.

Its analyst noted the decline was an “attractive opportunity to accumulate shares,” I agree and have a small piece of this stock. The company should post revenues of over $1 billion for the first time in FY2016, more than doubling sales in FY2015. Opko has a solid pipeline and should become profitable in FY2017. 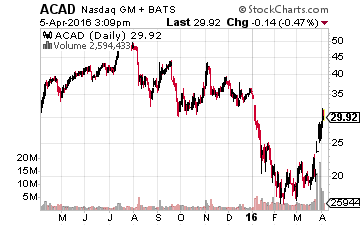 Sticking with another biotech I own, there has been massive insider buying in Acadia Pharmaceuticals (NASDAQ: ACAD).

The stock has soared more than 40% recently as the Ad Comm panel recently voted 12-2 in favor of recommendation of its first possible commercialized drug Nuplazid.

The recommendation does not guarantee approval of Nuplazid but does make it much more likely the FDA will approve the drug on or before May 1st.

The analysts’ estimates I have seen have projected $1 billion to $3 billion in peak sales for Nuplazid.

Obviously, Nuplazid could be a significant driver for Acadia which has less than a $3 billion market capitalization. The drug is also in late-stage trials for a couple of other indications as well.

Despite the huge rally, Baker Brothers, another noted biotech investing entity and one that is listed as a Director at the company, believes there is more upside to come for Acadia. They bought more than $30 million in new shares from March 30th through April 1st. The stock also has been reiterated as a Buy at least a half dozen analyst firms over the past or so including at Merrill Lynch and JP Morgan. Price targets proffered have been in a range from $40.00 to $50.00 a share. The stock currently sells for a little less than $30.00 a share. 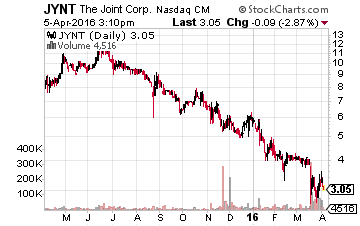 Moving out of biotech and off the beaten path, numerous insiders have been buying shares of The Joint Corp. (NASDAQ; JYNT), an appropriately named ticker for this franchisor of chiropractic clinics that operate on a non-insurance, cash-based model in the United States.

The company operates over 200 clinics. It also granted another 250 franchises through a network of regional developers and independent franchise operators.

This company has a market capitalization of just less than $50 million and is not yet profitable. However, this service provider is showing significant revenue growth.

It appears sales should grow some 50% this year to over $20 million and similar or accelerating growth is projected for FY2017 according to the consensus from the small analyst community that follows the stock.

I am going to take a small stake in this one. The stock just came public in late 2014 and reached as high as $12.00 a share just over six months after its public debut. The stock has since sunk to just under $3.50 a share. However, it is an interesting and fast growing concept. The company also hails from my home state and some 25% of its market capitalization is represented by the net cash on its balance sheet.